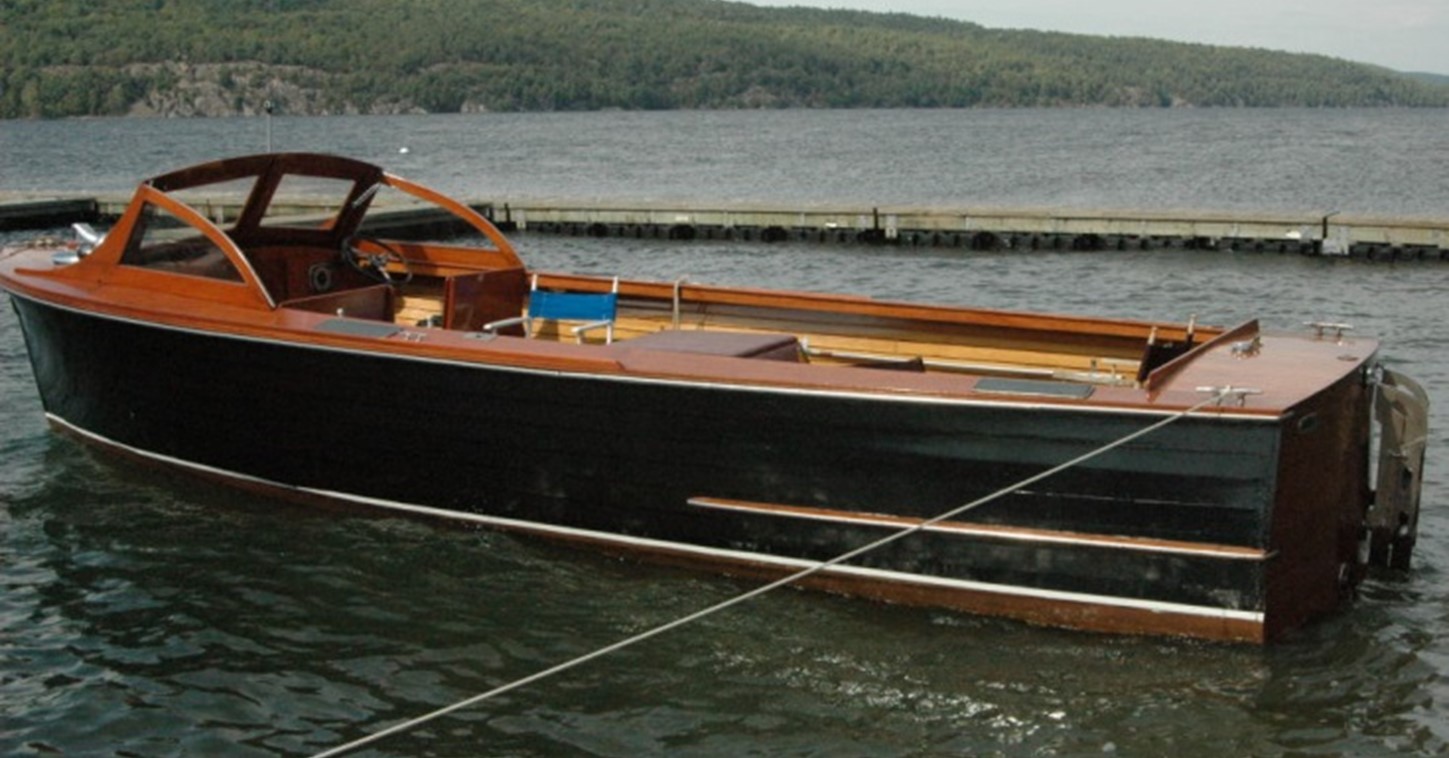 We live a few minutes away from the New York side of Lake Champlain, big water. Summer is the work season for us, so late afternoon – evening getaways on the lake with food and drink, often with friends, are our main form of boating. There is nothing like being out on the lake when the sun goes down over the Adirondack peaks to the west and the full moon comes up over the Green Mountains in Vermont to the east. Sea skiffs are pretty popular on these large open waters. Our first was a 1939 Hubert Johnson 24’ which had been stored in a shed at a local marina for 25 years. Plenty dirty but in sound condition and big enough to carry a few people and a couple of deck chairs. We had never heard of Hubert Johnson but were told they were fine boats. Hubert started his boat shop at the north end of Barnegat Bay in Bay Head, New Jersey in 1912, next door to his father Morton’s shop, became well known for sailboats, and began building sea skiffs in 1936, billing them as “America’s Most Outstanding Sea Skiff”. After a cosmetic restoration and replacement engine we enjoyed ‘Zephyr’ for the next ten years before selling her to a very appreciative gentleman originally from Bay Head who had seen a boat like it at the Bay Head Yacht Club as a young man and wanted one ever since.

Our next Johnson was a 1964 24’ Blackjack, a type designed in 1958 by naval architect David Martin, Mr. Johnson having passed away in 1949. The Blackjacks are beamier than the earlier Johnson skiffs, nice because there’s more room for socializing. The hulls were built to the design, but the topsides and interiors came in various forms. We knew the boat, now called ‘The Admiral’ needed some work but didn’t realize how much until it sank at the dock, although fortunately not totally submerged.

Turned out pretty much all the ribs and planks were rotted at the waterline, concealed by stringers. Painstaking reconstruction has been seasonally ongoing in an unheated part of my brother in law’s Canton NY boat shop (Everett Boat Works) for a few years. It may get in the water this year.

Rather than sistering the ribs, they are cutting out the rotted portions, making scarf joints on the ends, and using a jig to prepare steam bent scarfed inserts to match, which are then epoxied and riveted in place. They were even able to find rivets identical to those used in building the boat.

What to do about a boat? We found a 1957 24’ Johnson, ‘Tydamar II’, at Antique Boat America, where it had been languishing for a few years with a decreasing price tag, which was finally down in our neighborhood.

The boat was in show condition, ready to go, with a custom trailer. However, the original engine, a Chrysler Hemi, was not so ready, we discovered. It’s a low hour engine but hadn’t been run in about eight years. First time away from the dock an exhaust hose blew within the first hundred yards and that was just the beginning of replacing and repairing externals, resulting in a mostly lost first summer. Recent years have been better, and it has regularly won awards at the Lake Champlain shows. But the boat is an example of the older, narrower Johnson designs, no room for deck chairs, tight for socializing.

Last summer an acquaintance in Bay Head called to say he’s aging out of boating, doesn’t want to pay New Jersey winter storage again, and would we like to buy his ’64 Blackjack? Really good condition he said, in the water, teak decks, depth finder, newly rebuilt 240 horsepower Chrysler V8, has spent the last twenty plus summers in a covered boat shed right across from the old Johnson shop. Oh no, we said, not another one. But he prevailed and we towed ‘The It’ home on Tydamar’s trailer in late August.

Our first real use was at last fall’s ACBS Convention, where we had a great time hauling people around and got an experience of these boats’ seakeeping qualities. Heading down the river from Clayton after dark with half a dozen people aboard, in the narrow part just below the bridge, we approached an upbound freighter. It was pushing a huge bow wave. I didn’t see it coming and ran straight into the wave, shocking our chatty crew into silence. But the boat rode it well with no water over the bow.

Which one is going in the water this year? Don’t know yet.