The Last One.. Maybe 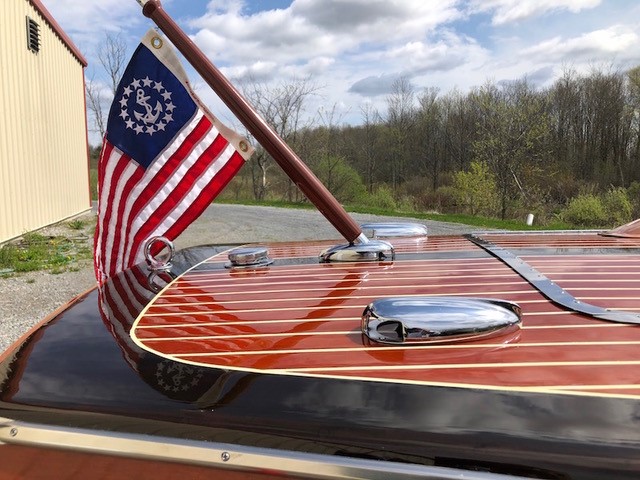 Our 1948 Century Sea Maid Bebop was awarded Outstanding Restored Classic Runabout at the 2015 Annual Antique Boat Museum Show in Clayton. The week before, the Sea Maid was awarded Best in Show – Restored at the 2015 ACBS-New England Chapter Show in Meredith, NH. Bebop had been five years in the making at Brasil Boat Works in Gilmanton, NH. Much of the time was consumed researching every detail down to the wiring to ensure all was correct. In 2014, we received Oustanding Preseved Antique Runabout at the ABM Show for our 1937 Gar Wood Custom Top Shelf. Compared to Bebop, the Gar Wood just needed to be dusted off.

After Bebop it was agreed we would step back from antique and classic boat restorations. Full of appreciation, gratitude and sense of accomplishment, it was time to admire other enthusiast’s restorations. That turned out to last just about a year and a half.

We bought a camp on Wellesley Island in the fall of 2015. There was considerable work to do on the camp, but, in addition, we had to find a good family day boat to put in the covered boat port. That search led to a 1970 Lyman 22′ Inboard Runabout. It so happened it’s hull number is S-1176 which is the last of the line. Naturally, it had to be named Last One. We towed the Lyman from Ohio to Gilmanton, NH, to have Lawrence Brasil bring this boat back from the forgotten and mistreated. Last One’s restoration was completed in July 2017. Lawrence and my brother, Keith, brought her over a day before ABM Boat Show Weekend.

Keith and Lawrence were able to stay a few days, so we enjoyed the Show including a tour of the Doebler Building with its unseen treasures. The big mistake was our obligatory stop at the Antique Boat America showroom. I was definitely “not looking”. Lawrence, though, found a 1948 Chris Craft Deluxe Runabout sitting forlornly outside that he thought was a prize.

The Deluxe was basically a gray boat, but had all the hardware and the correct engine. It was also being offered at a good price with a trailer—a deal too good to pass up? You know where this is going. A price was agreed upon and the boat went to back to Brasil Boat Works. We basically needed to build a new boat on the original skeleton. A few frames and knees needed to be replaced, but the stringers and keel were in good shape. The bottom, sides, transom and decks along with the battens are all new. We decided on a West Marine 5200 no soak bottom instead of the original design and finished up with 12 coats of Epifanes varnish. The engine turned out to need a complete rebuild, but we were able to find nearby the correct 131hp Chris-Craft KBL with triple carburetors, which was how the boat was originally set up. The Chris-Craft restoration was complete in May 2019, but the water was so high we postponed launching.

The next month, it became abundantly clear that what our eight grandchildren really wanted was a legitimate ski boat, they love water skiing, wakeboarding and tubing. So, at the end of August, before we ever splashed the Chris-Craft and got to enjoy our labors, we decided to put it up for sale and search for a ski boat. Within days, through what seemed almost like divine intervention, we saw a 1979 Ski Nautique for sale on Route 12 leading into Clayton. It was in exceptionally good shape still with the original owner and had been used this season. The survey was good and the Ski Nautique is now undergoing just some cosmetic and minor mechanical updating. We, with the grandchildren, will enjoy this boat starting next season and it really is the last one (until, I guess, it isn’t).