The Life Of ACE 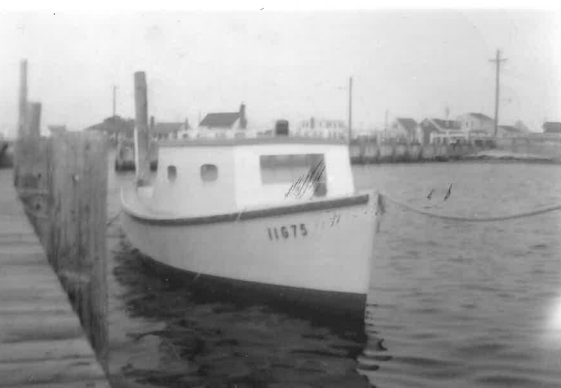 by Tuck Elfman member of the Mid-Atlantic chapter

In 1939 my Grandfather Augestus C. Elfman bought a bay front property in Surf City NJ., and had a house built. In 1941 in his shop in Doylestown PA, he built a 26′ Garvey witha cabin, which he powered with a 8cyl Packard. It ran smooth and quiet. In 1944 the boat was damaged beyond repair due to a huricane and parked next to the house, I used it as a play house.

The winter of 1944 & 45 my Grandfather hired a local boat builder by the name of Emerson Farley, whose shop was up a creek in Barnegat Bay, NJ. To build a Bato, which was a Garvey with a pointed bow. He named the boat ACE. The boat is 20′ with a 6’9″ beam, tapered transom, so it could turn in thin ice. Topped with a cedar cabin and canvas cover keel. She was originally powered by a Ford 32hp, 4cyl with a Ford transmission, to shift you had to push the clutch with your knee. She would plane with this engine, when the oil pan rusted the Ford was replace with a 1948 Universal Flex1 40hp it didn’t have the power the Ford did.

In 1952 ACE was turned over to my Father Bart Elfman, what when my Grandfather bought a “real” boat a 21′ Carl Adams Skiff. Dad used ACE for fishing and was the crash boat for the Surf City Yacht Club. I was along for the rides most of the time. Dad would get dressed up in his Rear Commodore Whites with his captain hat. He always had many guests along to watch the races. One time a squall hit during a regatta and he had to tow in 3 sunken lightnings at one time.

As I got older I pretty much took over ACE including maintaining her. I would load up with Yacht Club boys and girls and go exploring islands on Barnegat Bay. We all had Moth Sailboats, Raced and sail together. Spending summers at shore, that changed for most of us when we turned 16 and got jobs for the summer.

1960 while on a fishing trip to the beach having fun with my high school friends the fuel pump went bad and let gas into the crankcase, diluting the oil. We made it back to Surf City but the engine was damaged, smoke and hammered but still ran.

In 1961 ACE was sold to my friend Henry Fischer, who hauled it to Dolyestown and stored it in a barn. He installed a Universal Super Four 60hp. Modernized it with a steering wheel, Mahogany from an old Chris-Craft and put a roof on it. Henry passed away in 2016, his wife got in touch with me and wondered if I wanted the boat, it now sits in my shop in Doylestown. I have the idea of turning it back to original and donating it to a museum.