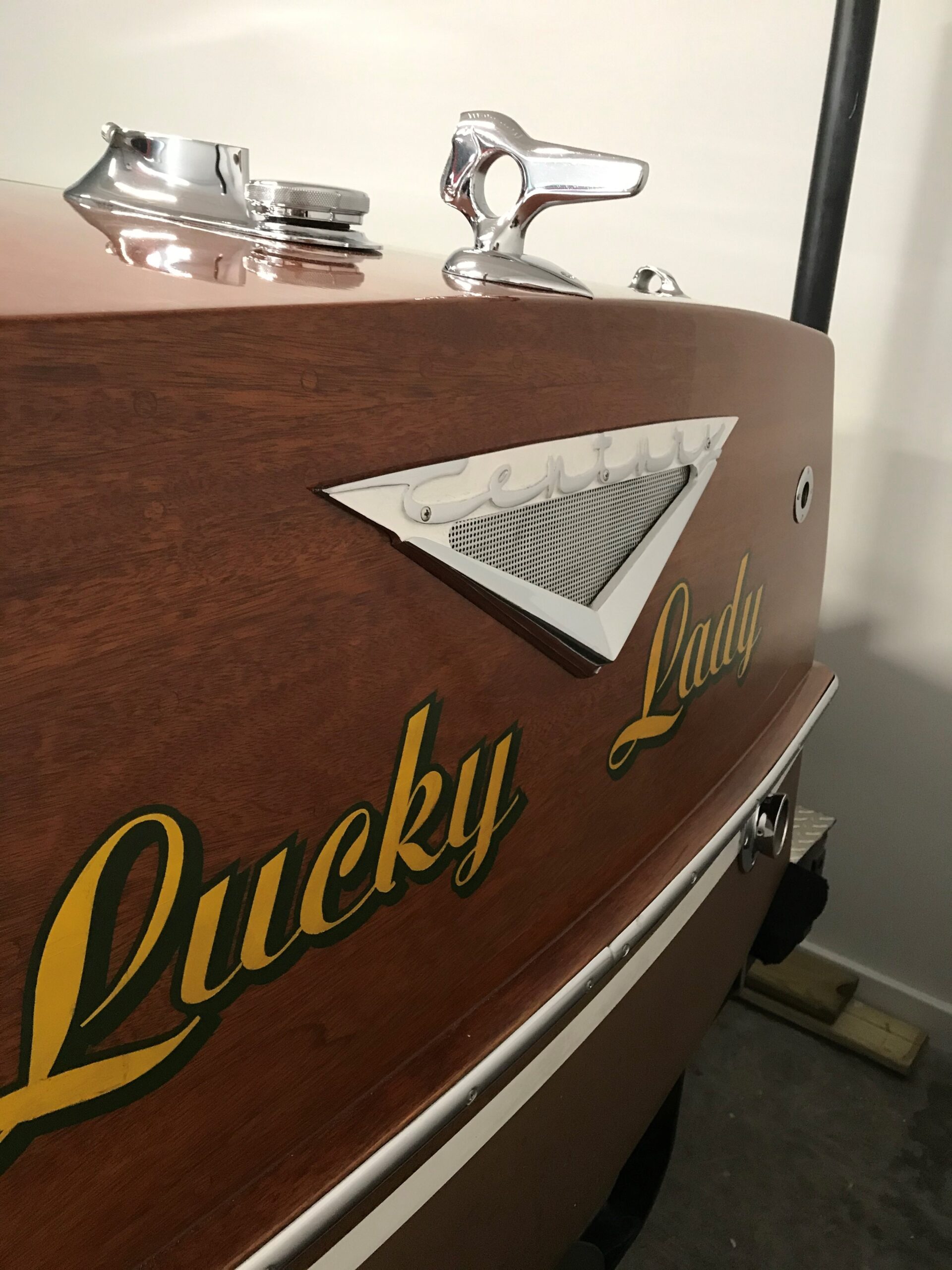 by Kent Volmerding member of ACBS

Our 1955 Century Arabian is haul number 5502. A friend of mine found it, stored under a lean-to on the side of a building, with the back of the boat unprotected. Needless to say, the boat was in bad shape. Most of the hardware was there, but the windshield and frame, and the entire interior, were missing. Additionally, the engine had been taken out of the boat and the hoses and wires had been cut for the removal. My buddy quickly decided that it was more work than it was worth. He sold it to me for $350.

The first step was to support what was left of the boat and get it turned over. As I began removing the bottom planks, I discovered the boat had been in a major fire. Someone had fit pieces of Masonite between the frames and battens to cover up the burnt wood, and by painting the bilge, the fire damage was not noticeable. The bottom planks were burned to within an eighth of an inch of being burnt completely through the plank.The engine stringers were even worse and the side frames were no better. The engine had internal damage from the fire and the block was beyond repair. It was decision time, restore the boat or use it for firewood.

I couldn’t resist restoring this boat. I decided to take my time, expand my skills, and make it a boat the entire family could enjoy. The Arabian was fitted with new engine stringers, all new bottom frames, all but three new side frames, all new deck structure and all new mahogany planking, all done with the WEST system.

After going through three original engines, non worth restoring, I made the decision to install a 283 V-8 that I rebuilt myself and to finish the boat the way I wanted. I purchased a windshield and frame that turned out to be off of a newer Arabian, which was wider than the 1955 and needed cut down. I also elected to go with regular stain and varnish. I named her Lucky Lady, because she was saved to live on. She served as the go-to wooden boat that my children grew up in.

Over the last few years, I had the opportunity to build my dream boat, a 1924 Hacker Race Boat Replica, that was launched in June 2017. This left Lucky Lady in storage for a few years. Last spring I brought her home and freshened up the varnish. I planned to offer her for sale at our local boat show but that thought was rejected by my entire family. Last fall, we launched Lucky Lady again and, I have to admit, it tickled my heart to see my son load up his wife, my daughter and my wife and take them out for a spin. While not completely original, she is all we could have ever asked for in a wooden boat; an object that has brought our family together for years, and it looks like she will continue to do that for many years to come.