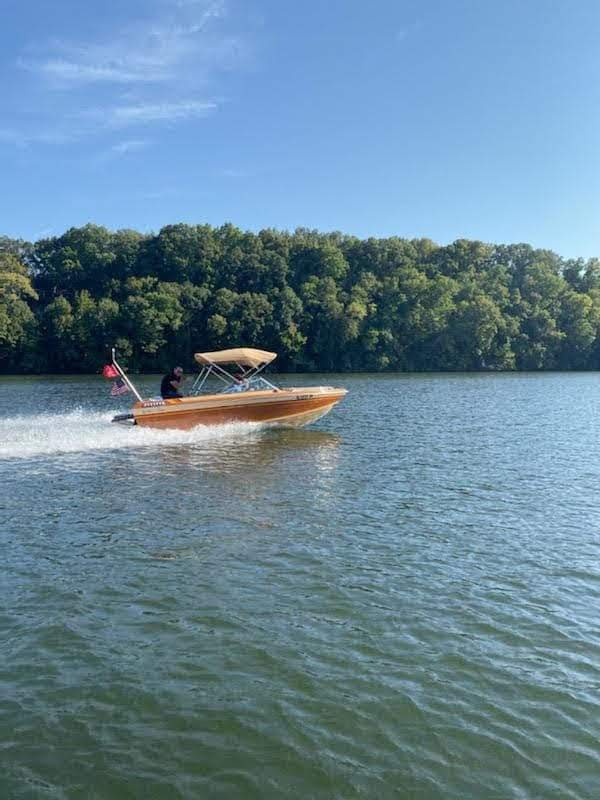 To start I must say it is quite the privilege to introduce the ACBS to my 84 CC Scorpion 168. Our story with this boat began in the Winter of 2014. My youngest son Jason had befriended an elderly neighbor and from time to time would go and assist him with odds and ends around his house. One afternoon, Jason was called into the neighbor’s garage to assist with the replacement of a few light bulbs. This was not the cleanest of garages as it appeared to have become overflow storage for a gentleman (much like most of us) that was very proud of his belongings. During the process of changing the lightbulb, Jason noticed that there was a foot of an Inboard / Outboard motor sticking out into the laundry space. Jokingly, my son said to his elderly neighbor, “Hey, you do know that there is a boat up underneath all of this junk, right?”. Almost immediately, and quite out of nowhere, the elderly gentleman’s wife responded with a rather annoyed tone, “Yeah, you want it?”. Now my son had no idea that the spouse was at an earshot or he probably would not have cracked the joke, but I am certainly glad she was as she was incredibly motivated to get the boat moved. Apparently, the boat has been in the way for years, and she was tired of mistakenly bumping into the foot of the motor when she was doing the laundry (I believe most of us can certainly relate). From this moment, the negotiation was on and the dig-out of the boat in the garage began. It took him a moment to get the information he needed, but once he saw the coveted badge of “Chris-Craft”, he knew that this was worth pursuing.

Now in order to capture the full entertainment of the story, I will need to provide a little background on my son Jason. When all of this occurred, he was in his late 20’s, had just recently purchased a new home, gotten married, and introduced his first child to the world. Long story short, he was broke. Professionally though, he was well established in sales and these types of negotiations were nothing new to him. He is by no means an expert on boats but being raised around them he knew just enough to be dangerous and had a good eye. For this reason, he called in the big guns (myself, and his older brother Patrick). Once we heard the words, “Boat”, and, “Chris-Craft” we both hit the ground running which turned each of our boring Sunday’s full of doing chores at the house into an exciting opportunity to get back on the water in a vessel that would really make us proud.

Little did each of us know though, that we were negotiating with an absolute master. Apparently, this elderly gentleman used to own multiple car dealerships, and was a true craftsman in the art of wheeling and dealing. As my son was financially strapped, and we all knew the boat would require a good bit of work, it came down to this statement , “Sir, we will get this boat out of your way, and together we will nurse it back to good health and get it back on the water which is where it belongs.” According to the registration on the boat, the last time the boat was on the water was 17 years prior which everyone knew meant that this guy was likely to have some real problems. Once that realization set in, a mutually agreeable number was determined, and the deal was finalized.

As forecasted, the boat needed some work. Heck, we had to replace the trailer tires and pack grease in the bearings just to free them up and get it out of the garage! After the Scorpion stayed locked up in the garage for 17 years without winterization, we had to make sure that nothing was locked up in the motor prior to installing a fresh battery and attempting a crank. We noticed that much of the wiring was dry rotted which forced us to replace the wiring in full, from front to back. This included all fuses, lamps, etc. With this repair, we went ahead and upgraded the boat to electronic ignition and removed the old school style points that were all so common to give heartburn. On top of all that we were forced to rebuild the carburetor, flush the fluid components and start over as everything in the engine had turned to sludge after sitting so long. Eureka, we now had boat!

This garage find was absolutely beautiful and she runs like a top. To date, I have only found one other 84 Scorpion 168 (located in Pennsylvania) which proves how rare of a boat this is. I quickly took her to the lake and after witnessing people’s response at the docks, this was all the justification I needed for the investment. I even had two different gentlemen offer to buy the boat within the first month! She has turned into a wonderful addition to our family, and she is ready to ride high and dry for many years to come.

Our favorite lakes to boat on are Lake Martin, in Alexander City, Alabama, Lewis Smith Lake, in Cullman, Alabama and Lake Logan Martin in Pell City, Alabama. We are very fortunate in Alabama to have so many places to go boating. I have a great time with the Dixieland Chapter ACBS. There is far more to the association than just the boats. The people in this chapter are a pleasure to be with, and they are always ready to help a fellow member. After growing up in Central Florida, the boat shows are a real treat and opportunity for me to get back closer to friends and family in the area. I had heard about the Sunnyland Boat Festival from these friends and family, so this show was certainly high on my list to attend. We truly had a great experience! There were so many different boats that I have never seen before which really opened my eyes to all that is out there regarding classic boats. The shows Dixieland puts on are great. Closer to home, our favorites are The Joe Wheeler State Park Show as well as the Pickwick Lake show. The Dixieland Chapter has several really nice fiberglass boats and we welcome more boats to join and come have some fun with us.