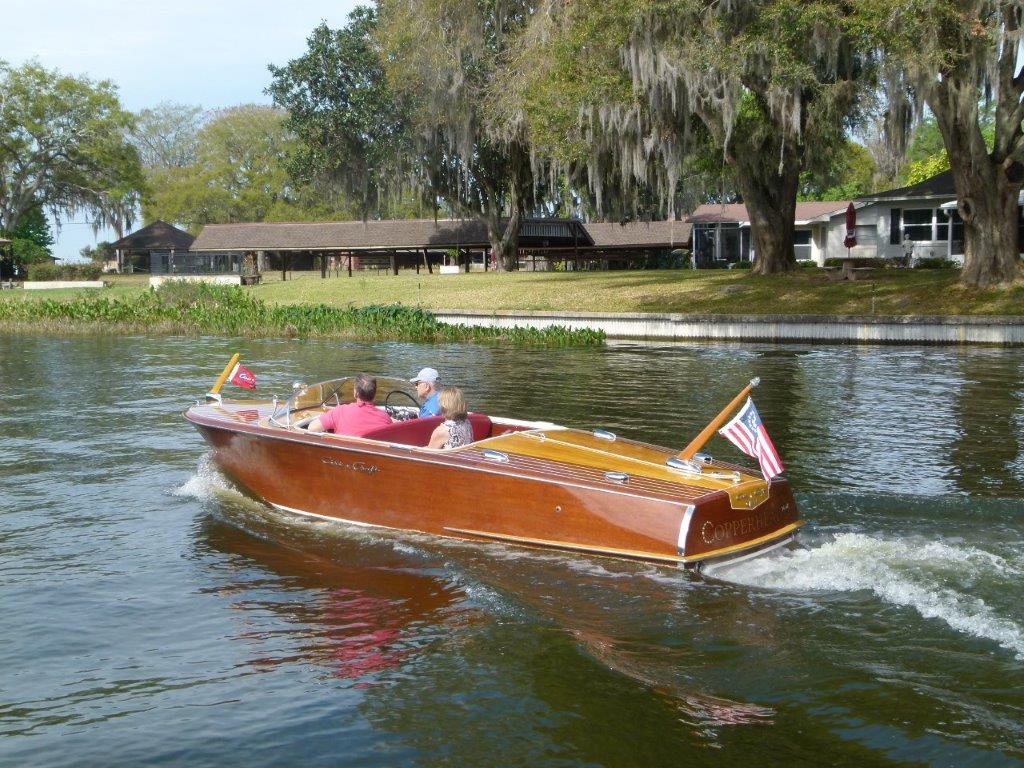 We summered on Cape Cod and like many who did, I was a sailor. I kept my sailboat in a beautiful little harbor on Buzzards Bay. Moored nearby was a beautiful triple cockpit Chris-Craft that I always admired. Many of us “old men” try to regain our youth by acquiring the toys we either had or wish we had. The closest I ever came to a power boat was a small outboard on the back of my dingy, I wanted a mahogany speedboat. When we started looking for a home on Lake Dora, it being the perfect location for such a boat, I decided that now was the time and began the search for a ’55 or ’56 Chris-Craft Capri.

I had been searching E-Bay, Craigslist and the dealers when a friend called and said that if I was still looking for a Capri, there is a guy on Lake Beauclaire who has one for sale, let’s go look.

For 3 years I had been searching for a relatively common boat and find a rare one (1 of 6) the next lake over from Lake Dora where I live.

Structurally, the boat was excellent having been redone; except for the plywood bottom, all the wood is original. I only needed to sort out some mechanical and electrical issues. The finish was OK but the “blonde” was not right. I had it redone. During refinishing the name was removed from the transom.

From the Mariner Museum documents, I learned that my boat was delivered in 1955 to Lake Hopatcong. Being a rare boat, I sent an inquiry to the president of the Lake Hopatcong Chapter of ACBS seeking a lead to an “old timer” who might remember the boat; he never replied.

I tried again, this time to the vice president of the Chapter. A few weeks later, I got a call from Cindy Heaton, the VP’s wife, seeking a picture and more info. That night they were having their annual lobster dinner and my request would be a great topic of conversation. The next morning she called saying that it was a great topic of conversation and that, if I could confirm a change that the original owner made to the boat, there was an “old timer” who knew the original name.

We talked the next day; delightful man; we must have talked two hours. Although I had reversed the change the original owner made, I confirmed to him that I had pictures which prove that a Morse throttle had been installed to replace the factory aviation throttle. He then told me who the original owner was and the name – Copperhead. He also gave me the name of the second owner who, being a best friend and neighbor with the now deceased first owner, might have insight as to why the boat was name after a snake.

I wrote to the second owner, who called me and was very pleased to know that the boat existed and was still being used and enjoyed. He confirmed that the boat was named Copperhead. When I asked about the name he replied: you know that a Copperhead is a venomous snake, do you know what else a Copperhead is? During the civil war, a northerner who sympathized with the south was called a Copperhead and the common caricature of the day in newspapers and magazines was a person surrounded by snakes.

The name on my boat is done in copper foil; the “C” is a copperhead snake; the name ends with crossed union and confederate flags; let the reader decide, is the boat named after a snake or a sympathizer!