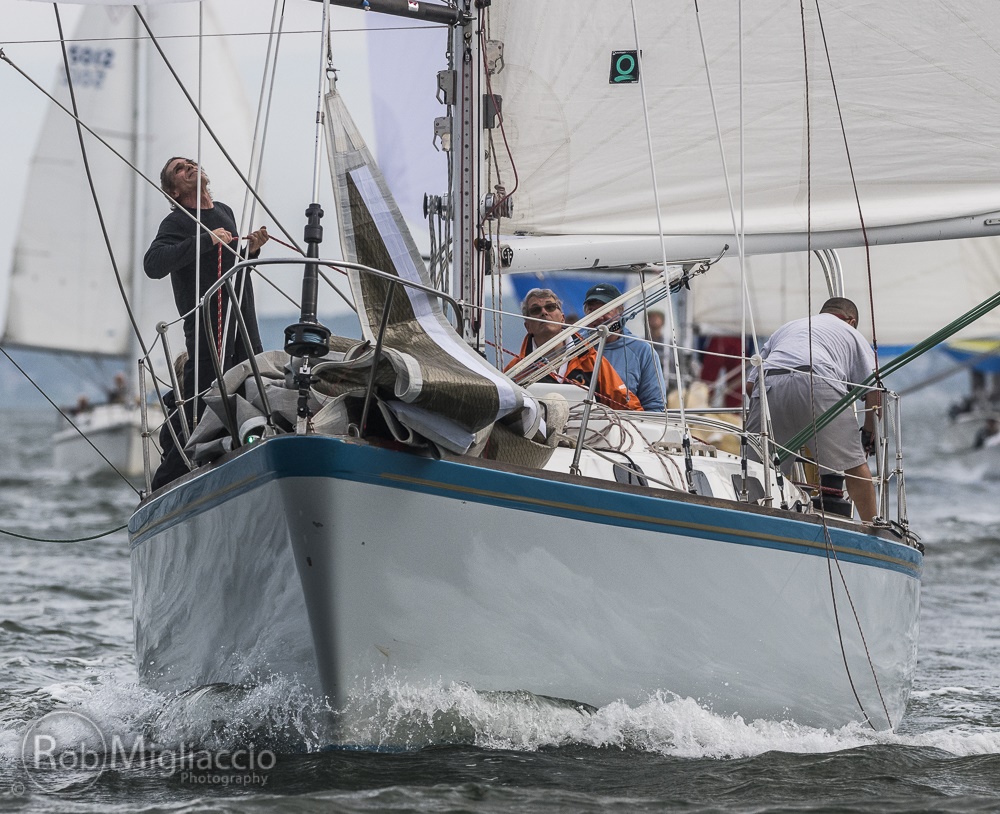 My involvement with the 36 started early. The 36 was designed and built by Bill Shaw, President of Pearson Yachts, a division of Grumman Allied industries. Bill Shaw was a friend of my father, joining us skiing the winter the 36 was in design.

In the summer of 1972, the prototypes had been built and Bill was racing in the New York Yacht Club cruise. Bill asked me to join him; I was 18 and headed to college. We won the race from Hyannis to Nantucket. That spring in 1973 my father bought hull #1. We raced Mariah competitively in Narragansett Bay, Rhode Island and in the Off-Sounding series through 1988. Dad died in May of 1989 and I sold her to a couple who loved her, sailing her actively and she had been sailed hard and needed a lot of work, but she was restored and raced for several years.

I bought Phoenix in 1994 knowing she would need a lot of work but that she was a great design and would be a great family racer cruiser. I bought her in City Island, the Bronx, New York bringing her up through Long Island Sound with a good friend Paul Tabor and his son, Paul Jr. We ate through spark plugs, anchor at the ready, thanks to a foul bottom (she couldn’t be hauled for inspection due to high winds so I bought her on faith). It was a memorable trip, sailing most of the way, the second day was windless, so we powered and went through sparkplugs, stopping briefly in Guilford CT wiping out the local hardware store’s supply. As we entered the west end of the sound the engine fouled again, and we had a fair current right toward the gauntlet. We had to shoulder in through a narrow stairway hatch over a hot engine changing hot spark plugs waiting for a command to drop the hook. Fortunately, we didn’t need to. On the third day we left Stonington in pea soup fog, but it lifted we sailed to Bristol.

The first night I saw her in the slings I was greatly relieved to find her sump was not soft. None the less when I brought her home I cut out the cabin sole and with the help of George Borges of International Marine Composites fabricated a series of ribs and glassed them in from as far as we could in bow (just behind the forward bunks) to the engine compartment laying in plenty of glass to the bustle and sump.

The next major project was repowering Phoenix in 2004. The Atomic 4 is a noble little engine but really just not powerful enough to push a boat as heavy as the 36 (13,000#) in heavy weather. Wanting as much power as possible within the space available I went with a 40 HP. This required taking out the Atomic 4 cradle and building new engine rail mounts formed to the hull and glassed in with a series of glass fabric at various angles that I kind of guessed at. Thankfully the measurements all added up and the engine fit in like a hand in glove i.e. there was nearly no room to work on the engine. Not being familiar with the process of bleeding the fuel line and being unable to reach the hand pump on the fuel pump I used the starter. I never got the line bled so I arranged a tow to the yard where she would be hauled and I could get a mechanic to look at the engine. Months later the mechanic called me at work insisting on my coming home at lunch to show me what I had done. I had filled the engine with water beyond his experience. It totaled the engine and I replaced it with a D-130 Volvo 30HP engine with plenty of power and room to work on the engine….. Come back tomorrow for the remaining adventures of The Phoenix!