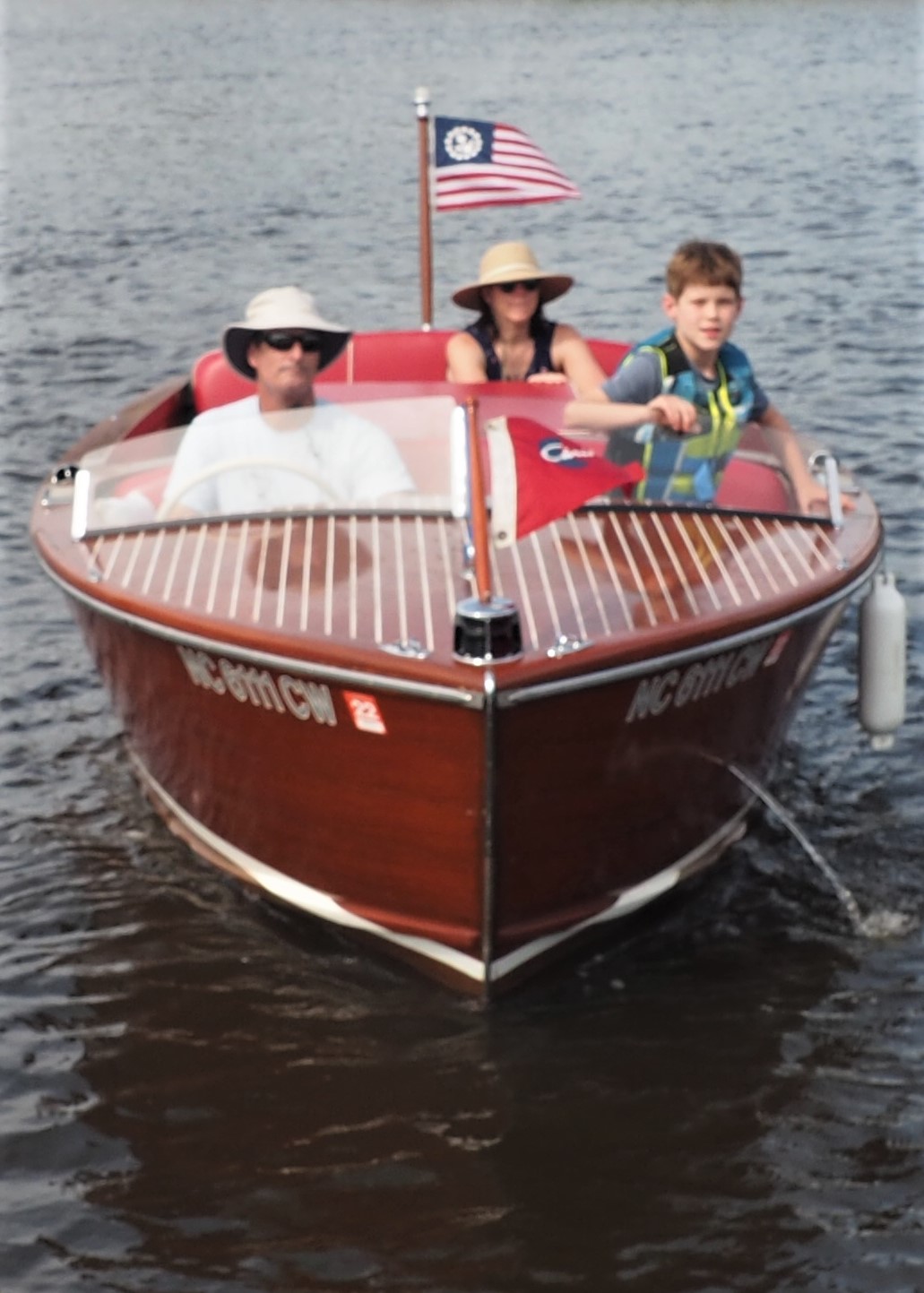 Blackbeard Sailing Club (BSC) located at Fairfield Harbour in New Bern, NC graciously allowed the NC Coastal & Piedmont Chapter of the Antique and Classic Boat Society to use the facility for a poker run held by the chapter on Saturday June 22nd. This was to reciprocate for the assistance provided by the NC C&P Chapter members in helping BSC to renovate the bath house after Hurricane Florence.

June 22nd began as a cool, overcast day. The temperatures were predicted to be in the mid-80s, great for a summer day on the water. Union Point Park at the confluence of the Neuse and Trent Rivers in downtown New Bern was the site of the Great Raft Race. There were throngs of people and a large number of boats anchored individually or rafted up to see the race. There was a nice breeze, but not so much that it caused whitecaps. All-in-all a perfect day for our planned poker run.

It was very convenient to be able to launch and retrieve our boats at the BSC ramp and to be able to use their picnic shelter for lunch and dinner. It was a great set up for the event. Some BSC members stopped by to chat about the antique and classic boats and to reminisce about their childhood memories of these beauties.

So, members and guests had a Subway sandwich lunch and a meet & greet. The boats were launched and everyone piled in and headed to the first stop—River Bend—a good 45-minute run up the Neuse and then up the Trent River. The parade of boats got lots of thumbs up from those viewing the raft race.

Judy and daughter Stephanie handled the land side of the poker run and took photos. Granddaughter Emily took photos from Hunky Dory. Things did not start off well for Judy as she and Stephanie got all the way to River Bend and discovered that Judy had left the envelopes with the cards in them at Blackbeards. They had to ride all the way back to get them, so the boats had to pick up additional cards at the second stop—Eastern Carolina Yacht Club. Here we were assisted by Chuck Dail who hosted us when we used their Club for our boat show dinner in 2017. Then off to Leif Eriksson’s dock on the Trent River, the Galley Store Marina where we had our 2017 boat show and the last stop at the Bridgeton Harbor Marina where we were to have had our 2018 boat show before Hurricane Florence did a number on New Bern. Then the long run back to Blackbeard’s Sailing Club.

At BSC we pulled the boats from the water and got them squared away. We awarded the prize for the best pennant to the Conley’s—the only ones who took the time to do it. As you can see from the photo, it was apropos to the boat! They won a tote bag with gourmet Hunter trail mix and a license tag with the chapter’s new logo. The best dressed crew award went to Dave and Deb Mahoney (loved Dave’s racy hat). They won a ballcap with the new chapter logo and gourmet Hunter trail mix. And the grand prize for the best poker hand (a full house!) went to Bill and Sharon Conley. You can see by the photo that it was a prize worth winning—wine, pistachios, crackers, M&Ms, a ball cap and a license tag. They graciously gave the second tag to Jim Hartman.

President Hills cooked the burgers and dogs and we had the usual side dishes. Even the flies stayed away when we turned on the fan. We blew up about 100 water balloons. Nine-year-old Oliver Gelm, Emily, and Leif had fun throwing them at a target. We all remarked what a beautiful day it was and how much fun we had. Ideas were already being floated about next year’s poker run!

The chapter appreciates being able to use the BSC facility and hopes to foster that relationship. This is a good example of collaboration with another boating organization.