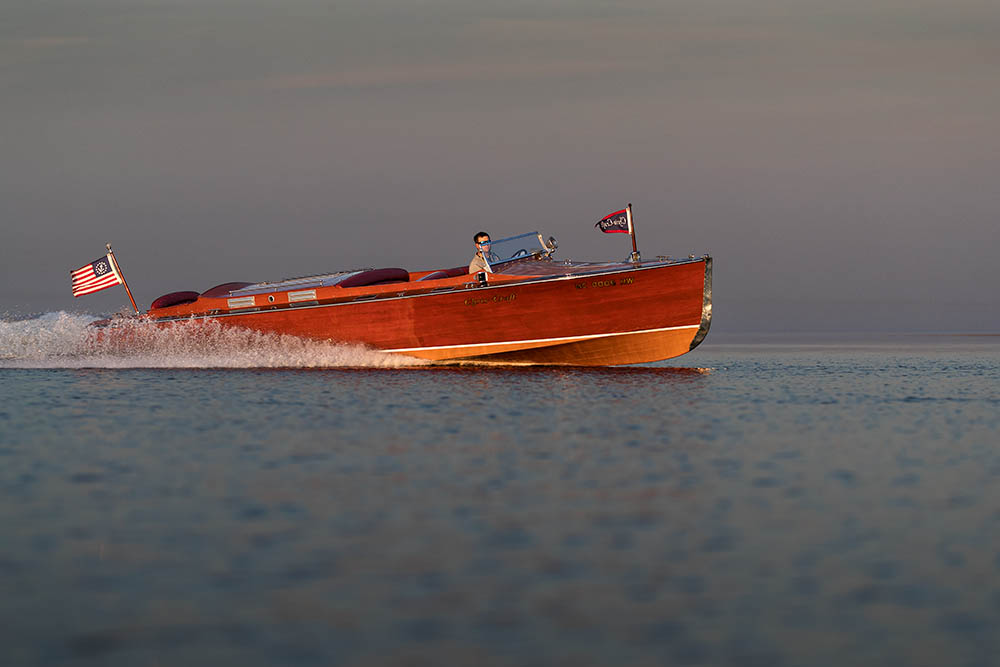 Roaring 20’s is a 1929, 28-foot Chris-Craft Model 17 Custom Runabout with the stylish double-upswept deck. The triple-cockpit models represent the top of the line Chris-Craft prewar runabouts and relatively few of these are seen today.

This model features the unique torque compensating aft bottom surface. Approximately 6 feet from the transom the port chine begins to drop and at the transom it is about 1 ¼ inches lower than the starboard chine. At planing speeds this bottom shape will lift the port chine to compensate for the propeller torque.

Hull #3095 was shipped from Algonac to a western Michigan dealer in July of 1929 with a 200hp Kermath motor. My father, Jackson Teetor, found this boat for sale in Chicago and purchased it in 1966. The seller, who was perhaps the fourth or fifth owner, had information that the Kermath motor had been upgraded to the 225hp model sometime around 1935.

Dad kept the boat at various places around Lake St. Clair until he built a boathouse near Algonac on the North Channel of the St. Clair River. Most of the hull was original but in 1992 extensive restoration work was performed on the boat by Mayea Boat Works in nearby Fair Haven.

The boat was used regularly until about 1998 when Dad retired it. He was then 75 years old and the care and maintenance of the Kermath motor had become too tiresome. The boat stayed dry in the boathouse until 2015 when the family decided to bring Roaring 20’s out of retirement. With Dad’s blessing the Mayea brothers replaced the Kermath motor with a more reliable Crusader 8.1-liter v-8. At the same time the worn upholstery was replaced along with new seat frames and fuel tank.

Dad passed away in 2016 but Roaring 20s is still run regularly by the family during the season. In the fall of 2016, the boat was prominently featured in the wedding of Dad’s grandson, Scott, and his bride, Lauren. Also, Roaring 20’s made the run up the St. Clair River from Algonac to Port Huron in September 2018 to participate in the ACBS International Boat Show.