The Saga of the 1968 Century Resorter 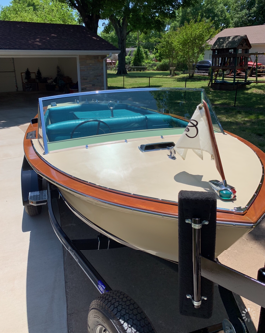 This tale begins many years ago at The Mahogany and Chrome Boat Show on Grand Lake of the Cherokees in Northeastern Oklahoma. The boat was owned by Guy McCollum who attended that show. We became friends and Guy began to immediately identify that I had a real interest in his boat. A few years went by, and we again met at the Keels and Wheels show in Seabrook, Texas, where his 1968 Century was once again on display. Guy then indicated that the boat might be for sale, to which I ultimately declined.

Now here comes the rest of the story. The following year at Keels and Wheels, during the show my wife Dayna and I were at the pool and up walks Guy Mccollum. I began to compliment Guy on how good his boat looked on display, to which he responded, “Why don’t you buy it!” So the story goes, we agreed on a price, the hands were shook, and Dayna my wife breaks in with, “Bobby you’re not going to back out this time”! I didn’t dare! So at that point The 1968 Century Resorter was ours! Now I might add that one of the main reasons I was attracted to the boat was it’s engine, a 390ci. Ford Interceptor! A real deep breather! The only thing that I have changed on the boat was the trailer. I had a custom tandem trailer built for it. This makes it a beautiful matched set. I have numerous Century’s in my collection but this boat is one of my favorites. The only sad thing about this whole series of events is that my friend Guy McCollun who I bought the boat from died a few years ago! Guy was a great man ,a good friend, and one who had a wonderful love affair with Century Boats! God Bless you Guy, and thanks for your friendship, and sending the 1968 Century Resorter that I named “My Passion” my way! 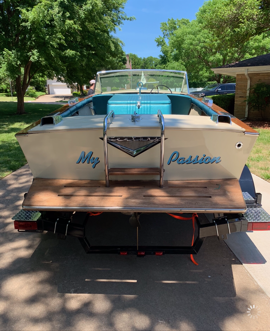 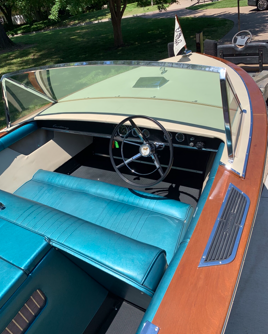