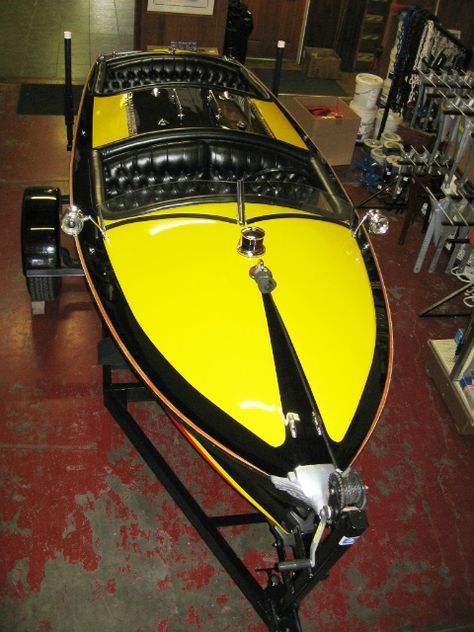 by Ron Wolfman member of the Northern California/Lake Tahoe chapter

STEELER is a 1936 Sea Eagle. Made of 20 gauge pressed steel at 15′ 9″, she is powered with the original 4cyl 58hp Lycoming engine. The bottom is specially designed and has graduated longitudinal corrugations, which lend speed, strength and stability to the planning surface. The frame and stringers are made of oak.

All Sea Eagles are equipped with five air chambers. One in the bow, one on the port side, one on the starboard side, and two in the stern. They were advertised as “non-sinkable”. Mullins Sea Eagles were manufactured in Salem Ohio from 1930 to 1935. All inventory was sold and moved to Oil City, Pennsylvania where they continued to be assembled until 1939.

Steeler was found in a garlic field in Fresno, California and was restored in 1985 by Eric Quinn and Ted Grebitus. Bob Speltz was consulted several times during the restoration and is responsible for selecting the color scheme The boat was purchased by Doug Elmore in 1988. We purchased Steeler sixteen years ago from Doug. The boat was fully restored in 2012. Steeler has been photographed for calendars, and been featured in Classic Boating. We have shown her in many boat shows, and have won several awards.
But sadly due to our age, we have decided to sell Steeler.