The Story Of Classmate 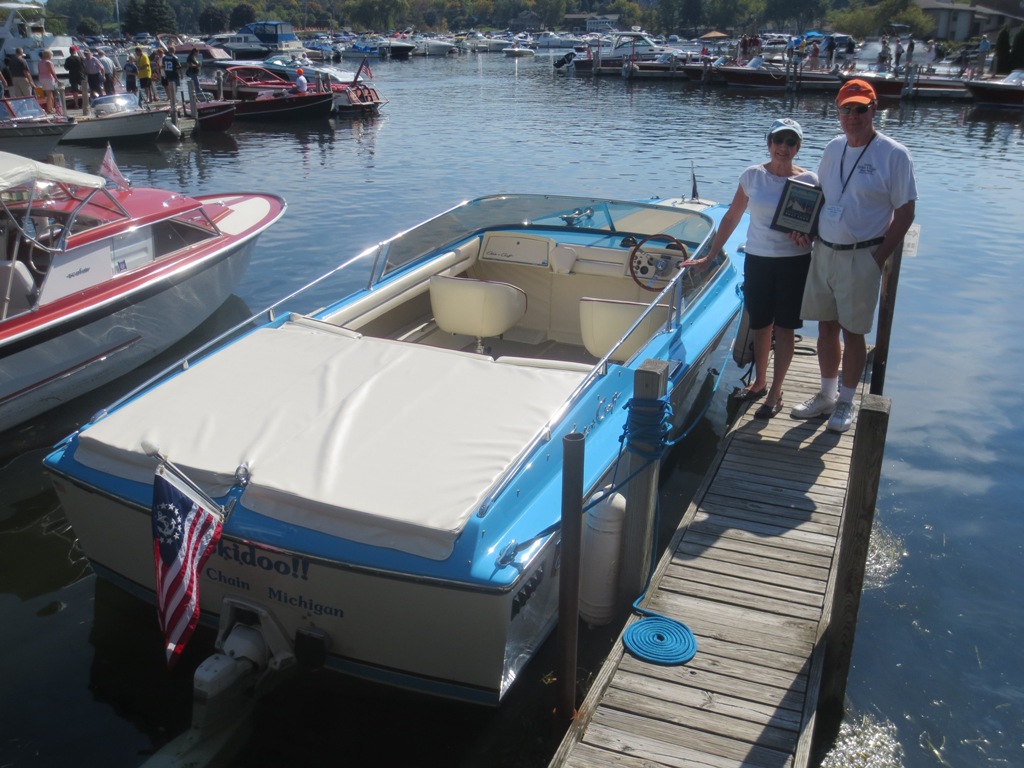 by John Gambill member of the Michigan chapter

It was 2010 and I had registered my 1957 Arena Craft Barracuda for the Branson Missouri International Show but what the heck, someone bought the darn boat just two weeks before show time! Reservations had been made and paid and here I was with no boat!

I had always liked the look of the XK and had told my wife that if the Barracuda sold a XK 22 would be in the Q for the next project so Craig’s List here I come. After doing several searches around the Great Lakes area up pops this bone ugly XK in Lorain Ohio. She didn’t look pretty in the Craig’s List photos but off the Lorain Julia and I went on a Saturday to check her out. She was bone ugly in the photos but when I touched her in person she was worse. She was full of cracks and crazing hundreds of them in the gel coat, the top side looked like a foursome had walked across her with their spikes on and she was far from being a show boat, very far! The amount of work she needed was staggering and even though I had restored several classic glass boats over the years they were nothing compared to what this monster needed. I told Julia it was just to much work and so we left Lorain and headed back to our home in Hillsdale Michigan without her.

After three days of stewing about not having a boat for the Branson show I called the seller of the boat and asked if he still had her so back to Lorain I went and dragged that mess back to Hillsdale. The only good thing about her was the fact that she did run so after a couple of trips around the lake making sure she wouldn’t die back on the trailer she went.

When we arrived in Branson I cut the side out of a cardboard box , took a black felt marker and made a sign that I duct taped to the stern that stated the boat was a fresh purchase and the restoration would start in two weeks.

Upon returning home and with help from my friend Al Herr we got her off the trailer and in to a cradle Al had loaned me and in the garage she went. She was almost a two year project and was finally finished in August of 2014. Hundreds of hours were spent grinding, sanding fairing and filling and when completed she had a fresh smile, a new beginning and a new lease on life. Her name is fitting as Julia and I grew up together, went through school together and graduated in the same high school class.

I’ve looked back on this project many times over the last few years and asked myself was if worth it? The answer is a resounding yes! What an amazing boat, she is no light weight, weighing in at 3300 pounds and with her deep V cuts a two foot chop like butter. Out of all the boats I’ve restored and enjoyed “Classmate” is the very best!