The Story of Eddy 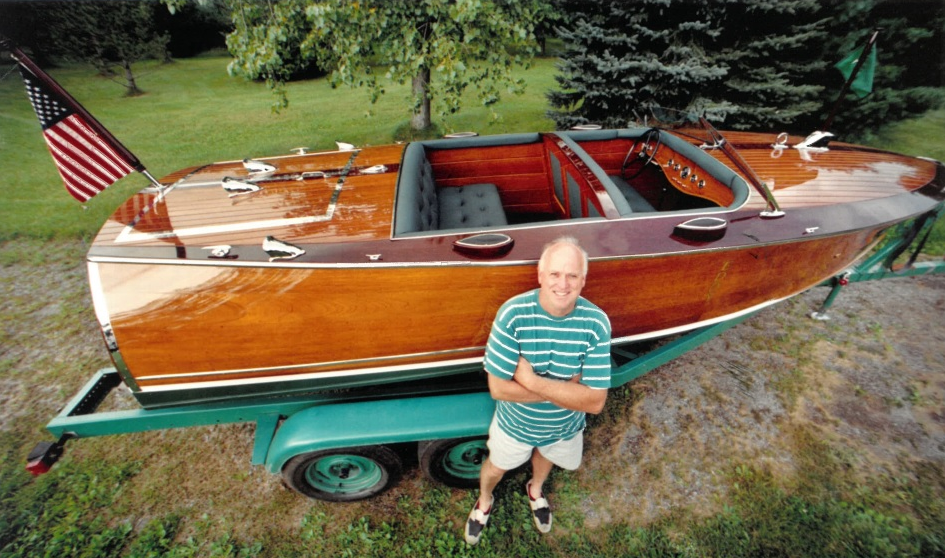 by Robert Hunter member of the Water Wonderland chapter

Any time I’m around water, I’m looking for the impossible. My Eddy-find was one of those. As my wife and I were driving around the canal area in Sebewaing, Ml, we found an open garage door. There sat the bow of a boat I had never seen. The owner knew little about the boat, but prompted by my interest to buy it, he said he would sell it to me if I would research it.

First, I checked the web and the local museum with limited luck. I did find out the boat had been designed by Douglas Van Patten. Further research revealed that there were approximately 60 Eddys ever built in 1936 at the Bay City, Michigan-based factory of Eddy Marine Corporation. Production of the Eddy pleasure boat stopped at the end of one year; some of the boats were started and never finished. I’ve come across two other Eddy’s over the years, one in Wisconsin and the other in the Michigan. I’ve heard of the existence of others but have never seen them. She’s a rare one.

Two years went into researching the boat. I pursued the builder’s family to glean information, I got drawings, magazine articles, literature from various sources. I was also looking for pictures. Finding special parts was a must to keep its authenticity,I found an original Eddy rudder that was perfect in meeting that goal.

One of the highlights of my search was communication with Bob Speltz, author of “The Real Runabouts” series of books. I wrote him asking if he knew of any resources that would help in the renovation. He wrote back and praised my success in finding such a gem. He said he really couldn’t help me, over and above the information published in his book series. I cherish that letter. Bob Speltz died shortly thereafter.

This Eddy had been reconfigured into a fishing boat after a gunshot/fire/sinking was experienced by a previous owner. Wanting to bring it back to a near-original condition, I found a woodie restorer that was willing to do the work. I became the gofer. It took 6 years to refurbish it.

She’s been on exhibit at shows in Michigan, New York, Wisconsin, and Florida. She has also been featured in a couple of major wooden boat publications.

Designed to handle the rough water of Saginaw Bay with higher freeboard and a crowned deck, she is appropriately name “Bay Beauty”.