The Story Of Lollipop II 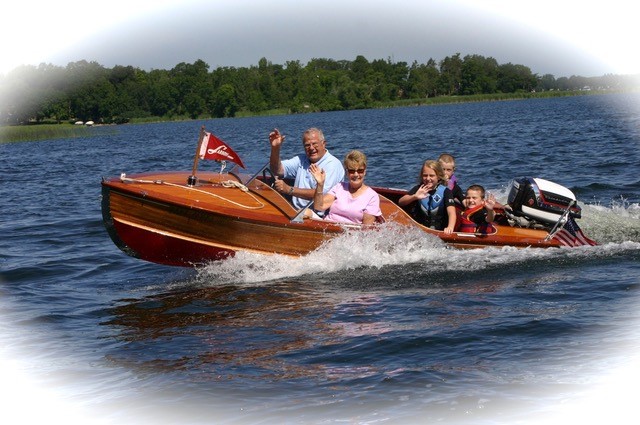 According to the birth records of “Lollipop II”, she was sired in Little Falls, Minnesota at the Larson Boat Works in 1957. This was about the last full year that Larson was producing most all-wood models. The records show that she was delivered to the Minnetonka Boat Works in the Twin Cities of MN, was 14’ long at birth, and was called a “Deluxe Speed Runabout”. Siblings of the popular design were born since ’39. Back then, when I was 6 years old I sort of hung out in the Larson Boat Works and re-discovering my favored model from 70 plus years ago & lit the old love affair again.

We purchased Lollopop II at John Monahan’s (now closed) Museum in 2005. We thought I had chosen the “pick of the litter”. But little did we know she was hiding more flaws than we had originally spotted!

The boat’s hull is made of western cedar strips, with steamed white oak rib and half rib construction, topped by Port Orford Cedar decking, and with beautifully varnished mahogany trim really stood out. Full length spray rails and a bit of white stripping added to her looks.

Though we have never had a woody Larson before, Lollipop II has brought a lot of nostalgia with it in that Paul Larson, the founder and builder, was my uncle. So,she is sort of a pampered pet and we’ve done our best to spoil her with some professional help along the way, ( i.e. a new keel as we found a big hook in the original; a major repair to the transom following a previous owner botching things up pretty with a modification to Paul’s beautiful design; etc.) Cosmetics were left to the us as we really wanted to honor Uncle Paul with the beauty of varnish and the red (Paul’s favorite color) bottom paint!

In those days, boats ordered at the factory showroom were sold like most new borns, naked! Catalogs of hardware were given the buyer or dealer and they chose how they wanted them in Perko, Attwood, or whatever. Lollipop II came with all Perko hardware.

In 1922, Larson became Minnesota’s first Johnson dealer. Paul’s brother Roy managed the outboard sales and service department. Evinrude was added later. In about 1950, the outboard manufacturers decided Larson couldn’t have both. So Uncle Roy moved next door and took Evinrude while Paul maintained the Johnson franchise. The Larson’s are a very close family and so to honor both uncles, I chose a 35hp 1957 Evinrude Lark to power the boat.

We spend a lot of time aboard and tow it with a modified 1959 Tee-Nee trailer which has seen about 42,000 miles to date between Minnesota and Florida alone, plus untold miles in-state. She done well in the boat shows too, winning the Most Original award in 2013 at Sunnyland. Also receiving outboard awards at Gull Lake, Alexandria, the Whitefish Chain in Minnesota; as well as Clear Lake, Iowa.

She was worth the “rehab” and grateful for people like Tom Juul, Tom Flood, Doug Sherb, and Stan Petersen who advised us. And thanks as well to John St. Martin in MN, and Casey Lynn in FL, who have kept my Lark pushing and giving hours of enjoyment on the Harris Chain of Lakes in Florida, the St. John’s and Suzanne Rivers; and of course, many of Minnesota’s famous 10,000 lakes.