The Story of RELIC 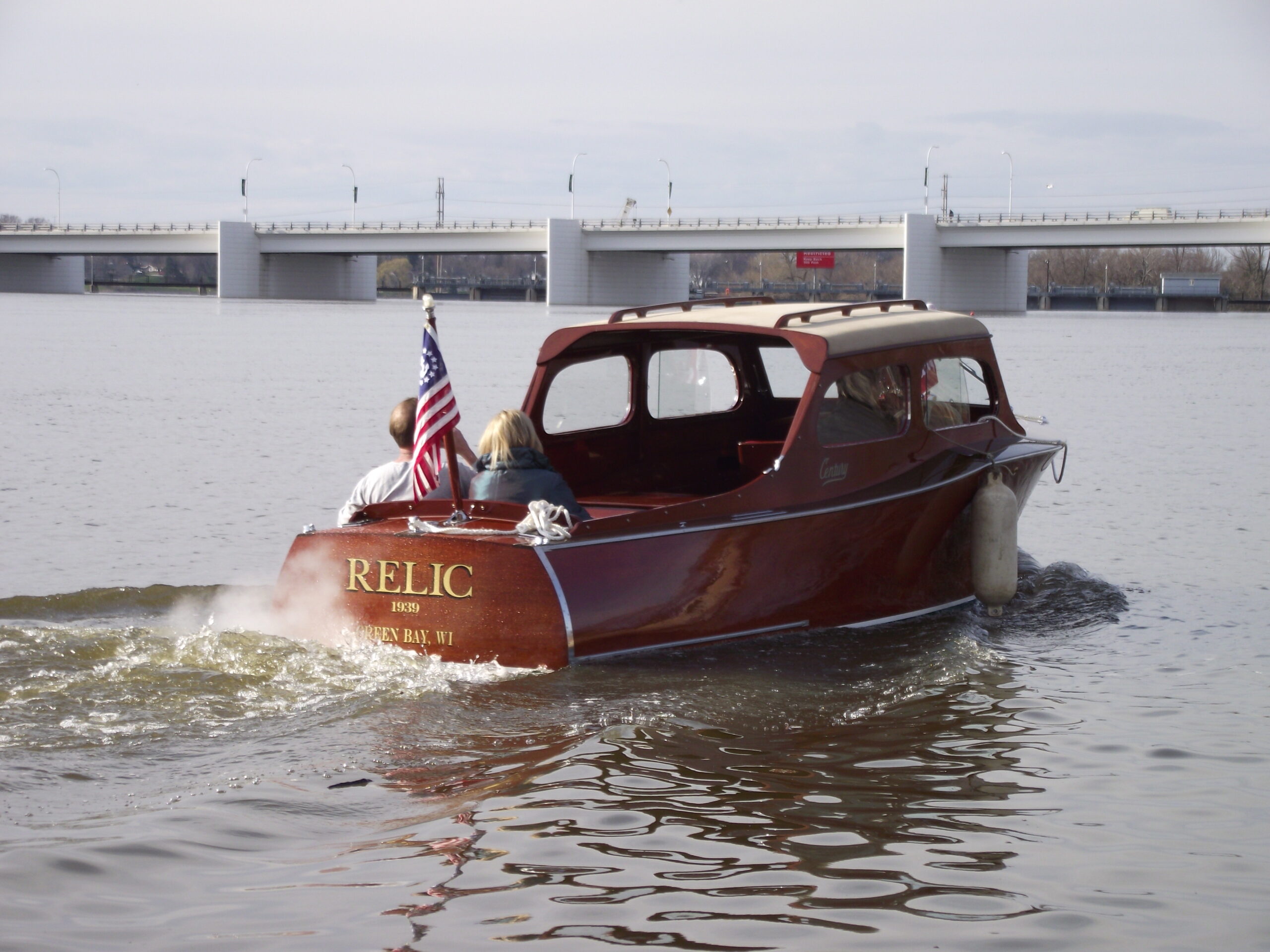 RELIC is a 1939 Century Deluxe Utility. I found this boat on Mother’s Day 2005 while taking my wife out to breakfast. The boat was sitting on a dilapidated trailer next to the restaurant. My wife went to the restaurant to hold a table and I knocked on the door of the house where the boat sat forlornly with a FOR SALE sign on her! The gentleman that answered told me he was selling her from his father-in-law’s estate who was the original owner. She had been in storage for years and was bare wood and her planking was warped and separated but seemed to be intact and had her hardware and motor and qualified as a “pattern boat”. I already owned an 18-foot 1955 Chris Craft Sea Skiff so I had some knowledge and experience with antique boats. The gentleman proceeded to grab his garden hose and start spraying her telling me what “great” shape she was in! The minute that water hit the planking they started springing off the frame! It was obvious that she had not been in water for many years! I asked him to shut off the water and offered him $1500 as is. Then I told my wife what she got for Mother’s Day!

I had no idea what I just purchased except I had never seen this designed antique boat before. The only thing I knew was it was manufactured by CENTURY Boat Co.

I went back home and got my boat trailer from the Sea Skiff and with a lot of help got her on and moved her to a storage building I owned.

I started the investigative process of finding out about this boat by contacting the people at the Century Boat Club in Manistee, MI.

I almost fell over when I received their response! They could not believe what I had found! They said it is a very rare 18-foot 1939 Deluxe Utility Sedan – in fact SO rare that it is the only one known in existence of that length/model/year!

Records show Century Boat Co. only built this model in 1938 and 1939 and stopped making them when they switched to war production in 1940 never to produce another one after that and the total number of this model manufactured was sixteen!

When I realized what we had, my son Tim and I decided she had to be restored and not only that but true and correct to her original factory specifications so we proceeded with Tim doing the restoration and I did the research and purchasing of all materials.

Now Tim had never restored or built a wooden boat before but has a strong background in custom wood working and we had the complete boat to use for patterns SO we proceeded to setup a shop to do the restoration and purchased a copy of Don Danenberg’s book “How to Restore Your Wooden Runabout” We were on our way!

The research proved to be a daunting task! It was like detective work finding the experts who knew this information! One example – because the only pictures available were from Century sales catalogs and in 1938/39 all photos were black and white. This model has a canvas cloth cover on the top of the cabin which looked like it was white in the pictures! After many phone calls to people who referred me to other people I was given the name of an individual whose grandfather did the installation of these tops at the factory and was informed by him that they were khaki tan not white!

After working with a lot of “experts” we were assured we had all the correct spec’s including the bottom and bilge paint colors, the correct stains, hardware, and we even authenticated by the serial number we had the original motor installed at the factory in this boat, a Gray Marine 4-cylinder, 75 hp. It was a 95% restoration with all new wood, Philippine Mahogany planking, white oak framing, and even the original fire extinguisher! All the hardware was re-chromed. The only thing not original but approved acceptable for show judging by the ACBS was a 5200 bottom. The only original thing we were able to save was the cabin enclosure everything else is new

With Tim, working a year and one half six days a week, she was completed! Now she needed an appropriate name and being the Grand Old Lady she is the name RELIC fit perfectly!

We had a custom trailer and travel cover made, had her christened, and RELIC was ready for her first Boat Show! On to Seabrook, TX May 2011 to the Antique Keels & Wheels Concours d’ Elegance!

She went on to win First Place- Best Restored Utility at the 2011 ACBS International Show at Lake Geneva and every show that RELIC attends she wins either Best of Show or Best Century!!!
If you are interested in more information about RELIC go to our website http://1939Century.com