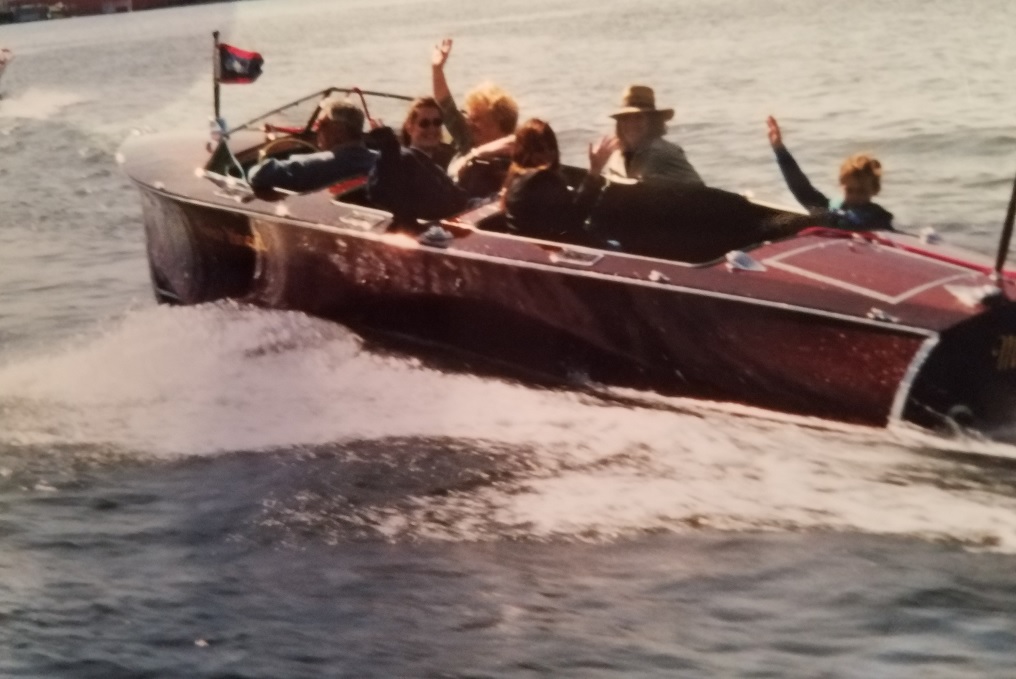 by Richard Reichert member of the Lake Hopatcong chapter

As a child in the 1950’s I was lucky to have spent every summer at our family home on Lake Wallenpaupack. At the age of 12 I spent hours at the end of our dock hoping to see the occasional wooden boat that passed. Our immediate neighbor owned a 1950’s Chris Craft hardtop. Not only did I long for the sightings but I hoped for a ride in that beautiful boat. My boating at that time consisted of hours in a 12′ aluminum Feather Craft with a 25hp motor that I earned by delivering papers.My love for boats increased as I got older. I built a mahogany hydroplane in my teens. As an adult I purchased several fiberglass boats but the dream of a wooden boat still remained.

In 1997 I purchased a beautiful Victorian house on Lake Hopatcong with a two story covered boathouse. I now knew I could properly house a wooden boat should the time arise. Not long after settling in I discovered there were local groups and clubs that catered to wood boats. I was thrilled when I was invited to join the local ACBS and was told I did not need to own a wooden boat, (YET would have been the remainder of the sentence.)

I had been aware for some time that most boats I had seen were Chris-Crafts. I started looking at Chris-Craft utilities for the ease of access to every part of the boat but there were none available at the time. Although they were beautiful I made the decision to look for something different. I was also concerned about maintenance and repairs since I was new to this hobby.

In the Summer of 1999 I attended the annual boat show in Clayton. Now I was really confused and obcessed. I had heard for some time of boat builders named Turcotte who built a well made beautiful boat called Garwoods from the original plans.

As fate would have it, on the last day of the show, in the pouring rain, the brothers appeared in a 22′ 1988 Streamliner. It was like a dream or unheard wish coming true. We were introduced to the brothers and learned she was for sale. Her name was Santana and she had been owned only by the man she was built for. She was a beauty and the floor plan was perfect. Easy to maneuver everywhere. I went for a ride and the deal was sealed. Plenty of power and a smooth ride in a not so calm waterway.
The upholstery was to be changed to green rolled and pleated leather and the name changed to Ma’Cherie.

The big day came on May 16th 2000. She rests on a lift inside the boat house and we are proud to own her. Maintenance has been minimal and pleasure maximum. In 2013 she graced the front cover of our local calendar, tee shirts and some websites and was painted by a famous local artist, Greg Hildebrandt.

We enjoy parades in the summer, showing her in events and leisurely riding with friends and family. This was a decision we have never regretted. We are honored by your request to show her on the website. It finally shows acceptance of repos which will be around for years to come for future generations to enjoy.