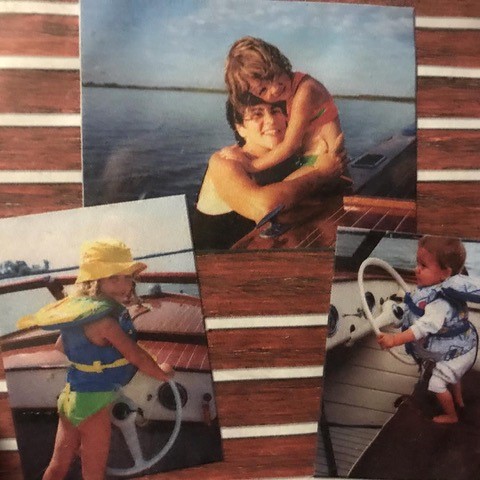 by David Irvine member of the Michigan chapter

This 23-foot utility boat was built by former Chris-Craft employee Tom Cuthbertson and his brother Andrew. Their business involved doing boat repair in the summer. When things were slow in the off season, they would build a boat over the winter.

We believe there were two boats, ours, and a cruiser, built in 1957. Nephew Brian Cuthbertson still owns Cuthbertson Marine and has maintained the 95hp Hercules Chris-Craft engine on our boat for many decades. Brian has a beautiful 24-foot 1961 Cuthbertson Cruiser with a 327 F Chris-Craft motor.

Our boat was owned by my 8th grade art teacher Ross Brown in the mid 1960s. He sold it to our next door neighbor Jay Kenney, who also was a school teacher (and marina owner). Jay sold the boat to my parents Keith and Aline Irvine in the spring of 1974. Its home port remains in Algonac where it was built, and has been used for hundreds of memorable rides by our family and friends.

My thesis advisor at Michigan State University told me to go home on my dad’s boat in the summer of 1988 to think of a thesis project. The result was the PBS documentary “Runabout Renaissance: The Rebirth of the Wooden Pleasure Boat” which took me all over the country to Clayton, Hessel, and Lake Tahoe. We’ve taken it several times to the ACBS Michigan Chapter show in Algonac, at the original Chris- Craft Plant, nota quarter of a mile from our boat house.

The boat is all original, with the exception of the deck that was replaced by grandson Chris Cuthbertson in 1989, and the windshield which a friend “Woody” and I rebuilt. Mackie Boat Works recently freshened up the varnish, so we are ready to add the name my late dad Keith gave the boat ”The Big Dipper.” My wife Joyce and I used the boat after our wedding at Holy Cross Catholic Church in Marinee City Michigan in July, 1991 to ride up the river to the reception at the St. Clair Inn.

Our kids who are now grown, have enjoyed rides and many swims from the boat with their friends since they were very young, as have our dogs. This is a user boat that has seen a lot of use!