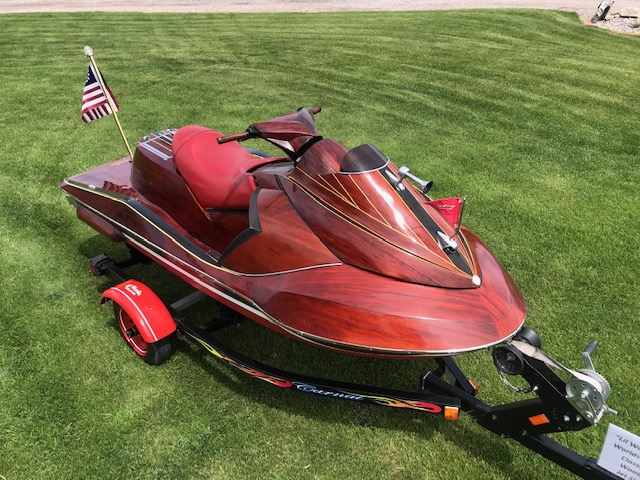 Lil’ Woodie, a classic style wood jet ski was completed by me in 2021. I live near Polson Montana on the shores of Flathead Lake. Lil’ Woodie was conceived at the ACBS Whitefish Woody Weekend wooden boat show that was being held in June of 2019. A group of boat owners were sitting around a table at the Whitefish Lake Lodge enjoying a beverage when Bob Moore, president of the local ACBS Big Sky chapter, made the comment as to never having seen a wood jet ski. Jokingly I replied that would be something I could build. After another beverage or two I stated that I not only could do it but that I would make it happen. Maybe I was not thinking too clearly at the time, but I soon found myself researching the internet to see what existed in the form of a wood jet ski. Turned out that such builds were nearly non-existent and certainly never done in a classic wood boat theme. 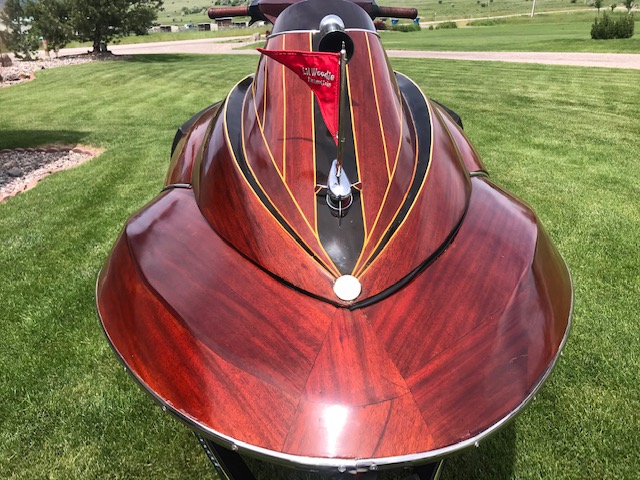 It then took me several months to find a suitable jet ski with a hull that had the lines and shape that would allow for a conversion to the classic wood boat look my mind had envisioned. I ended up purchasing a 2002 Sea Doo GTX 4-Tec for $1,200. It was a nice looking, low hour ski with some hull damage and a jet pump that had seized. That was not a problem since I was going to give it a new wood surface and the pump got a new impeller, housing and bearing. The ski was new enough that it had a 3-cylinder 4 stroke engine that is much quieter than the older 2 stroke models.

The build began by removing all of the hardware and moldings. The rear portion of the two-part saddle seat was discarded. The gelcoat finish was ground off most of the ski and the bottom portion of the hull was sprayed with a classic red boat paint sold by System 3. Various humps and bumps that existed as Sea Doo styling were removed, which resulted in creating holes and voids that were filled with wood, foam, and fiberglass. The surfaces had to have more gentle curves in order to allow the bending of the mahogany boards which covered most areas. 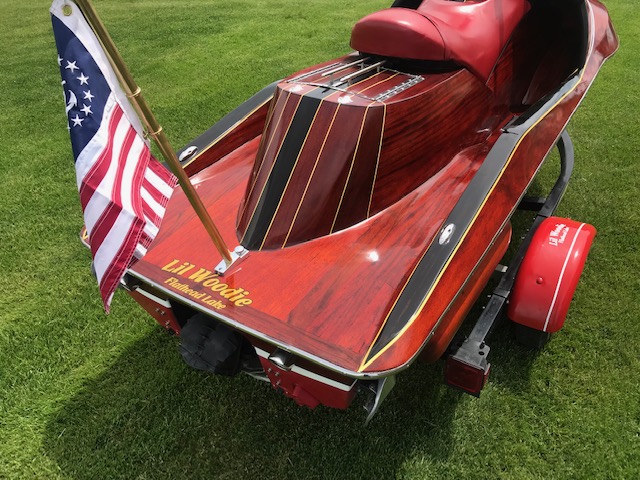 In 2012 I had finished a 3-year build of a 26 foot triple cockpit runabout in the style of the 1940 Chris Craft and named it Candyman. Left over from that build was a fair amount of solid 4mm African mahogany material 6″ to 10″ wide and nearly 7′ long. This was cut into the pieces which I applied to the to the upper portion of the ski using Glen-L epoxy. This became a true challenge as there are few places a typical wood clamp can be used. The solution to hold boards in place while the epoxy resin cured for 18 hours was to wrap heavy duty bungee cords around the hull, under which I would wedge appropriate lengths of wood sticks to apply multiple pressure points holding the boards in place. That is easier said than done. Curved surfaces slippery with epoxy resin makes it hard to keep even a small board in perfect register for the desired outcome. As a result, I typically could only shape and glue two boards each day. It took a total of 157 boards to cover the appropriate surfaces.

Finish work was frustrating due to the wood being only 4mm thick. You need to be careful not to sand down through it to the fiberglass hull. Final finish was achieved with Lockwood stain and Epifanes semi-gloss varnish. 15 coats were sprayed before it was flat sanded with 320 grit paper using an RO disk sander and a pneumatic jitterbug palm sander. A low luster gloss was achieved by progressively using 400, 600, and 800 grit paper followed by 1000 and 2000 grit 6″ round foam disk pads. Finally, 3M rubbing paste and 3M polishing compound brought about a show finish. 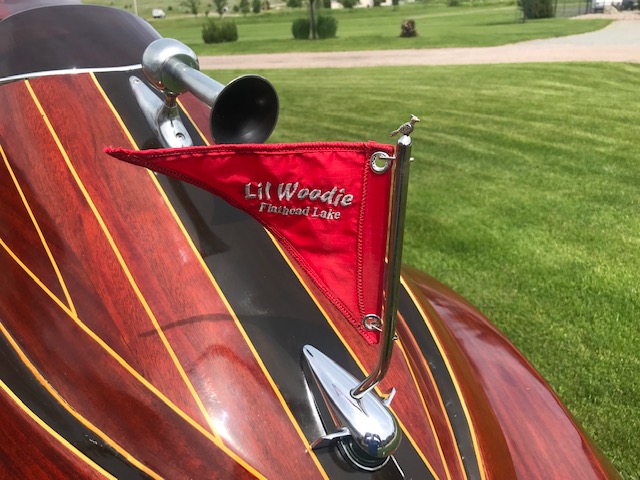 Lil’ Woodie incorporates most of the classic wood boat features of yesteryear. The area where the rear passenger seat used to be now has a semi-domed boat-tail design with a functional “engine” hatch trimmed out using stainless steel hinges, seam covers, and grab handles. Some of the boards were “separated” using pin striping rather than traditional caulk. Ebony black stain was applied to the center boards and out-board cover boards. Faux exhaust ports were fastened to the stern. Stainless steel rub rails separate the top of the ski from 4″ of bright wood which then meets the white boot stripe above the red hull. From a brass flagpole at the stern a nautical American flag is flown and topped with the classic beehive lens with functional lamp. The bow has a working airhorn and navigation light with a pole for the Lil’ Woodie pennant. Close inspection will reveal the woodpecker medallion at the very front of the bow and small woodpecker ornaments affixed above the pennant pole, and also embedded into the ends of the wood handle grips. Step pads normally used for boarding are positioned to be underneath the rider’s feet. Below the bow there is a faux cutwater applied using self-adhesive chrome foil. The plastic sponsons that gave the ski a gripping edge when turning on the water were replaced with wood sponsons formed with teak from stair treads salvaged at an historic San Diego hotel renovation.

The name Lil’ Woodie is a play on semantics. Classic wood boats are most typically known as a “Woody” while a “Woodie” is more often an early station wagon with some wood bodywork. And of course, there is the cartoon character Woody the Woodpecker. So, the name and concept incorporate all variations of several wood themes. 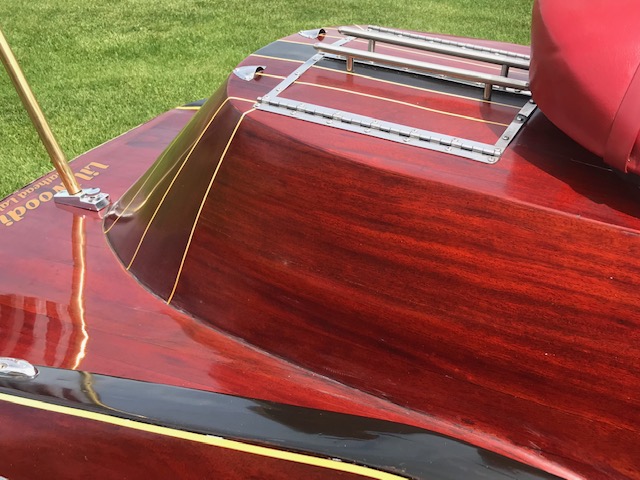 Sea trials were completed June 18th, 2021, on the waters of Flathead Lake. The first wooden boat show in Montana for Lil’ Woodie is the Whitefish Woody Weekend IX on June 25th. In September it will be shown at the Idaho “Dry Rot” gathering on Priest River followed by the ACBS International show on Lake Coeur d’Alene. 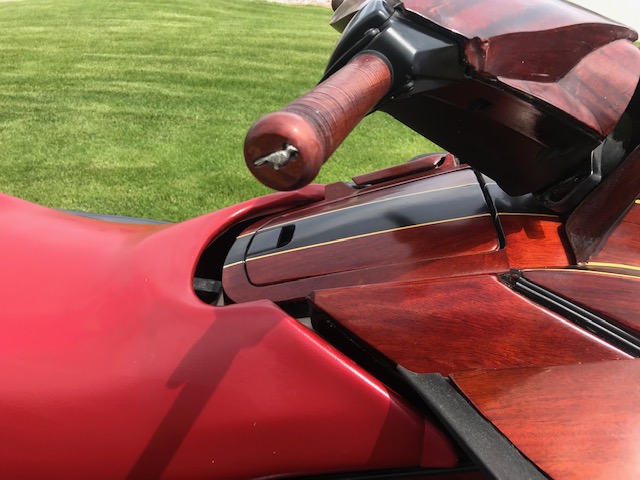