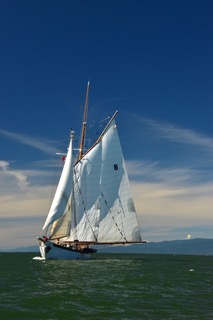 The Bellingham, Washington based Schooner Zodiac, designed by William Hand, was built in 1924 in East Boothbay, Maine for the Johnson & Johnson family. 127’ on deck,160’ overall, she spent most of her life as a San Francisco Bay Bar Pilot boat before being put up for auction in the early 1970s where she started a new chapter under the ownership of Captain Tim Mehrer and the Vessel Zodiac Corporation.

Tim spent his youth aboard the Schooner Adventuress, helping his father Captain Karl Mehrer restore the ship while earning his own Captain’s license. Now he and his crew, under the tutelage of master shipwright Frank Prothero, began the years long restoration of the Zodiac based at Lake Union Dry Dock in Seattle. While 99% of the frames below the waterline are original, everything else is new, from the Douglas fir decks and spars to the Caterpillar 3412 engine. A focal point is the Honduras mahogany deckhouse hand carved by Prothero himself. The 7,000 square feet of Dacron sail – featuring a 4,000 square feet main sail – are still raised by hand. Down below the crew has built small staterooms with sinks to provide passenger privacy along with large individual bunks in the salon. There are three heads, two with showers. She sleeps 26 passengers overnight and holds 49 passengers for day sails.

Schooner Zodiac is Coast Guard certified to sail from Olympia, Washington to Desolation Sound, British Columbia. She spends most of her long season in the San Juan Islands on a variety of themed trips, from Seafood & Winery to Books A’Sail. Day sails include salmon dinners and local brewery tastings. We also do private charters, with the ship well suited for family reunions. The ship’s secret weapon is our cook, Caz Ludtke, whose culinary wizardry is matched by her ability to provide food options for all needs (seasonedatsea.com).

As the ship heads towards her 100th year, she is joined by our third-generation ship’s captain, Calen Mehrer, Tim’s son. Calen is continuing in the shipwright path of his father and grandfather before him, working to forge new community partnerships to preserve our Salish Sea maritime history, and train a new generation of sailors in the specialized skills needed for work on a wooden ship.
For more on the ship’s history, technical specs go to: schoonerzodiac.com.