These boats are just plane fast 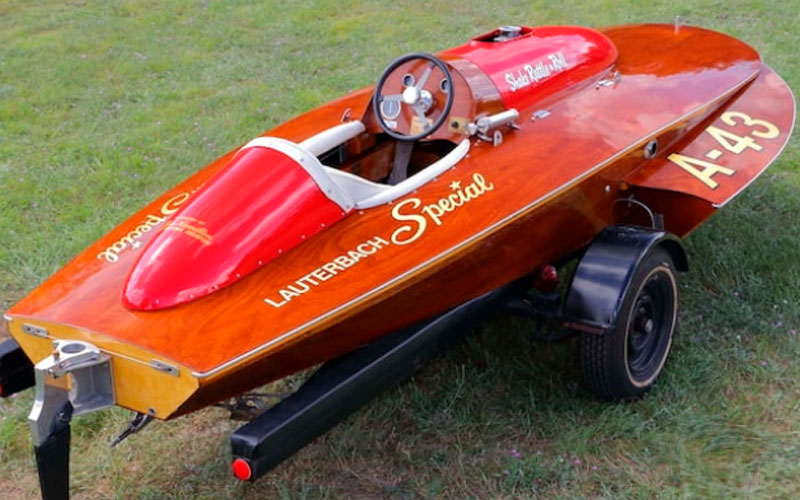 “These boats are just plane fast” was written by John L. Stein

Published Feb. 14, 2018, on the Hagerty Insurance website, this article is shared with permission of Hagerty Classic Boat Insurance

Taggart owned Nigel Mansell’s groundbreaking carbon-fiber Lotus 1984 Lotus-Renault F1 car, and owned and drove Alain Prost’s first F1 ride, a 1980 McLaren-Cosworth. He also revels in his little Austin-Healey Bugeye Sprite, stuffed with a Ford 351 Cleveland V-8. And he loves and owns On Any Sunday-era vintage dirt-trackers like the Harley-Davidson KR750 and BSA Gold Stars. But this story is about Taggart’s intricate collection of the 1920s through ’70s wooden race boats.

Summering on Higgins Lake in northern Michigan while growing up, the young Taggart (“Tag” to his friends) learned how to handle a boat early in life. And he never forgot, in the words of Ratty in Kenneth Grahame’s The Wind in the Willows, “There is nothing… half so much worth doing as simply messing about in boats.” But racing was also in his blood; Taggart’s grandfather was a prewar Indy 500 car entrant, enabling the lad to wander Gasoline Alley at will, imprinting him with speed’s allure.

These two influences remained embedded in Taggart for decades, until he ultimately found the time, place, and resources to build a boat collection, with the help of veteran boatwright Eb Wickes to run the shop operations. Ultimately Taggart collected more than two dozen historic wooden boats dating from the family’s century-old 1918 Matthews launch to a wicked Chevy-powered 1990 flat bottom named Tom’s Cat. Although the collection includes Hacker, Gar Wood, Century, and Chris-Craft runabouts, most are racing hydroplanes dating from 1937 to the 1970s.

One story that Taggart enjoys telling is of a lightweight plywood “crackerbox” oval-racing boat he became aware of by hearing its engine fire up in an Oak View, California, neighborhood. After locating the boat, Taggart purchased and towed it to Michigan behind his 1965 Shelby GT350, admittedly hitting 120 mph along the way. “The trailer tires said, ‘Do not exceed 60 mph,’ but I didn’t know that at the time!” Tag recalls with a laugh. While buoyed near his cabin, the boat broke loose in a storm and washed ashore, then languished in the woods for 25 years. And that’s how he met Wickes, who agreed to rebuild it before signing on to care for Taggart’s growing collection.

Some of our favorite Taggart raceboats:

If the Pebble Beach Concours d’Elegance included boats, Alfa would belong there. Powered by a triple-carbureted, six-cylinder Lycoming marine engine (fun fact: Lycoming also built engines for Auburn, Cord, and Duesenberg cars and WWII aircraft), this Class E “gentleman’s racer” was a remarkable craft in its day. When Taggart found it, the spruce-and-cedar hull had nearly a half-foot of water inside, requiring a comprehensive restoration. After Wickes finished it, Alfa took first place in Michigan’s prestigious Les Cheneaux Islands Antique Wooden Boat Show.

This gorgeous APBA N Class world championship winner and speed-record holder is aptly named Tiger. Constructed by highly-respected Henry Lauterbach of Virginia, the boat is considered a high point among classic “shovel-nose” hydroplane designs. Powered by a 215-cubic-inch aluminum Buick V-8, it streaked to a record 134.636 mph over the Flying Kilometer.

Named Jeez-O-Peets, this is one of the first three-point hydroplanes, whose hull design radically improved performance by restricting the water contact points to just two front sponsons—and the propeller! Powered by a twin-carb flathead Mercury with aluminum heads, it raced in the Missouri River Valley 80 years ago and is now fully restored.

As this story was in progress, most of the Taggart boat collection had been transferred to Mecum Auctions, which offered 20 examples at its 2018 Kissimmee (Florida) event in January, where nine boats sold for a reported $243,100. See them for yourselves, and learn more about the race boats still available.

Thank you, Carla Gernhofer of Hagerty Classic Boat Insurance, for sharing this story.