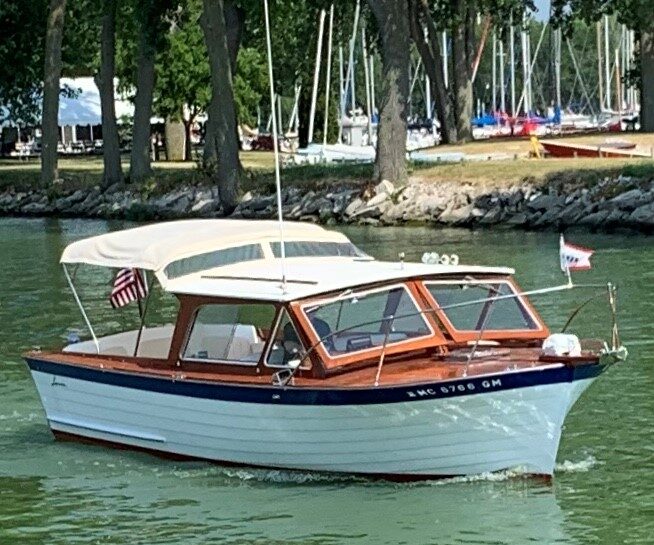 This is a continuation of the restoration and modernization of my 1969 Lyman Cruisette. If interested in the history and earlier projects on this boat, you might want to read: “The Lyman Restoration Project”, published in the Fall 2020 issue of the ACBS Rudder magazine. A brief summary follows.

I found the boat in a barn in East Tawas, Michigan in 2017. Fortunately it was sitting on a good Cruise Master trailer, which came with the boat. I trailered the boat to Toledo Beach Marina where Mike Gedert and his team were located. Since Mike has worked on and owned several Lymans, I knew I was in good hands. My immediate tasks consisted of resurfacing the deck, cabin sides and top, installing new windows, and completing many interior projects, e.g., converting a small closet to a sit-down private head, paneling the forward cabin, installing new navigation, depth/fish finder, and VHF radio equipment, as well as providing a corian galley countertop with teak fiddle trim, and putting matching trim pieces on the dinette table and instrument panel. While I worked on these projects, Mike and his team stripped the old green and white hull paint, re-planked a few aft hull boards, sprayed on two coats of primer and three coats of white enamel, and added blue top stripes and red boot stripes, and applied a copper bronze bottom paint. I tuned up the Chevy 327 cci engine, which was marinized by Crusader, added mufflers, a new Aluminum Fuel Tank, and later, new exhaust manifolds, fuel pump, and carburetor. New cushions and a full camper top with isinglass window panels were supplied by Scott Butler. The boat was first launched in August of 2017, and since then, about 70 hours have been logged with trips to boat shows and fishing in Lake Erie.

Which leads me to why I felt a trolling motor and a pressurized hot water system were desirable. When fishing for Walleye in the western basin of Lake Erie, it is best to be able to control the speed to between one and slightly over two miles per hour. Since when the V8 engine is idling, the boat speed is closer to 4.5 mph. Thus one either has to drag a sea anchor, which can foul fishing lines, or install a separate, smaller outboard or electric trolling motor. I preferred the latter, since an electric motor is very quiet, which does not move fish away from the boat, and quite frankly, its quiet running adds to the sense of relaxation when fishing. Once this decision was made, then the issue was how to mount an electric trolling motor on the wood transom and still look good on such a classic boat.

With some research about trolling motors I realized that the minimum thrust needed to move this sized boat at the required speeds was 55 pounds. More on-line research resulted in choosing a trolling motor from Newport Vessels with a 55 pound thrust, which also had a battery charge indicator. To avoid having to tip the motor up over the transom when not in use, I opted for installing a small swim platform that the shaft would pass through, and allow the motor and prop to be suspended under the new platform but out of the water when not in use. To accomplish this the normal tilt bracket was removed and the control handle on the top of the shaft was fitted with a slightly larger shaft that would fit around the top of the regular shaft. The wires running from the controller to the motor were run through an in-line plug close to the top of the shaft. The 12volt power cord also was routed to a water-tight plug on the top of the aft deck. This arrangement allowed the control head to be removed from the top of the motor shaft and stored separately when not in use. To raise and lower the motor, a line was attached to the top of the motor and brought up and through a line stopper located on the aft deck. Carbon fiber braces that the shaft passed through were created and secured to the transom at two heights. 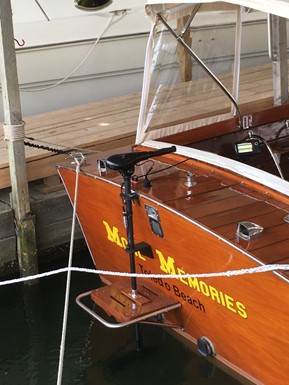 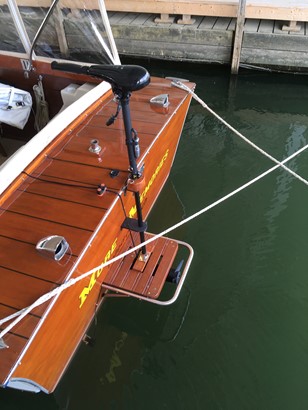 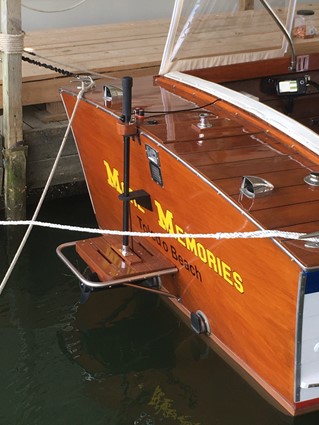 A second, Huminbird Fish Finder attached to an adjustable arm was added by the aft seat. This was deemed necessary to assist in locating fish and maneuvering the boat when seated in the aft area, since the main depth/fish finder was located at the forward helm.

A 200ah deep cycle marine battery was added under the back seat, along with a dedicated 10amp smart charger. I estimated when the battery was fully charged it would provide about 10 hours of run time at trolling speeds.

So far I have used the trolling motor several times this summer. It appears to be quite adequate in moving the boat to over two mph for long periods in seas below one foot. It remains to be seen if it is powerful enough to handle higher sea and wind conditions however.

Now the story about the hot water system. I had previously replaced the original manual, pump style faucet for the galley sink with a single lever faucet. This faucet could distribute both hot and cold water. An automatic Jabsco 35psi pump was used to draw water from the original stainless steel water tank. To add a hot water feed to the faucet I split the water output hose from the pump, with one hose running directly to the faucet and the second hose to a custom made heat exchanger. The heat exchanger consisted of ¼ inch ID copper tubing wrapped around the aluminum tube section of the exhaust system. During normal cruising, this exhaust tubing section will warms to between 120 and 140 degrees. The copper tubing wrapped around the exhaust tube is then warmed while running the engine. An output hose from this heat exchanger was led to a small fiberglass tank to store the hot water. The output from the storage tank ran to the sink faucet. So once the engine is running at its normal operating temperature, which in my case is about 140 degrees F, by opening the hot water faucet for a few minutes the small tank is filled with hot water for later use. So far it would appear that the water is warmed to about 110 degrees, which feels very nice when fishing on colder mornings.

The pictures display the custom heat exchanger and sink faucet. 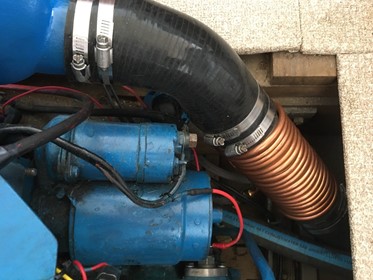 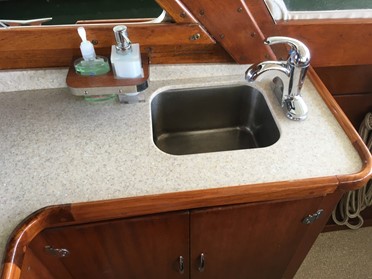