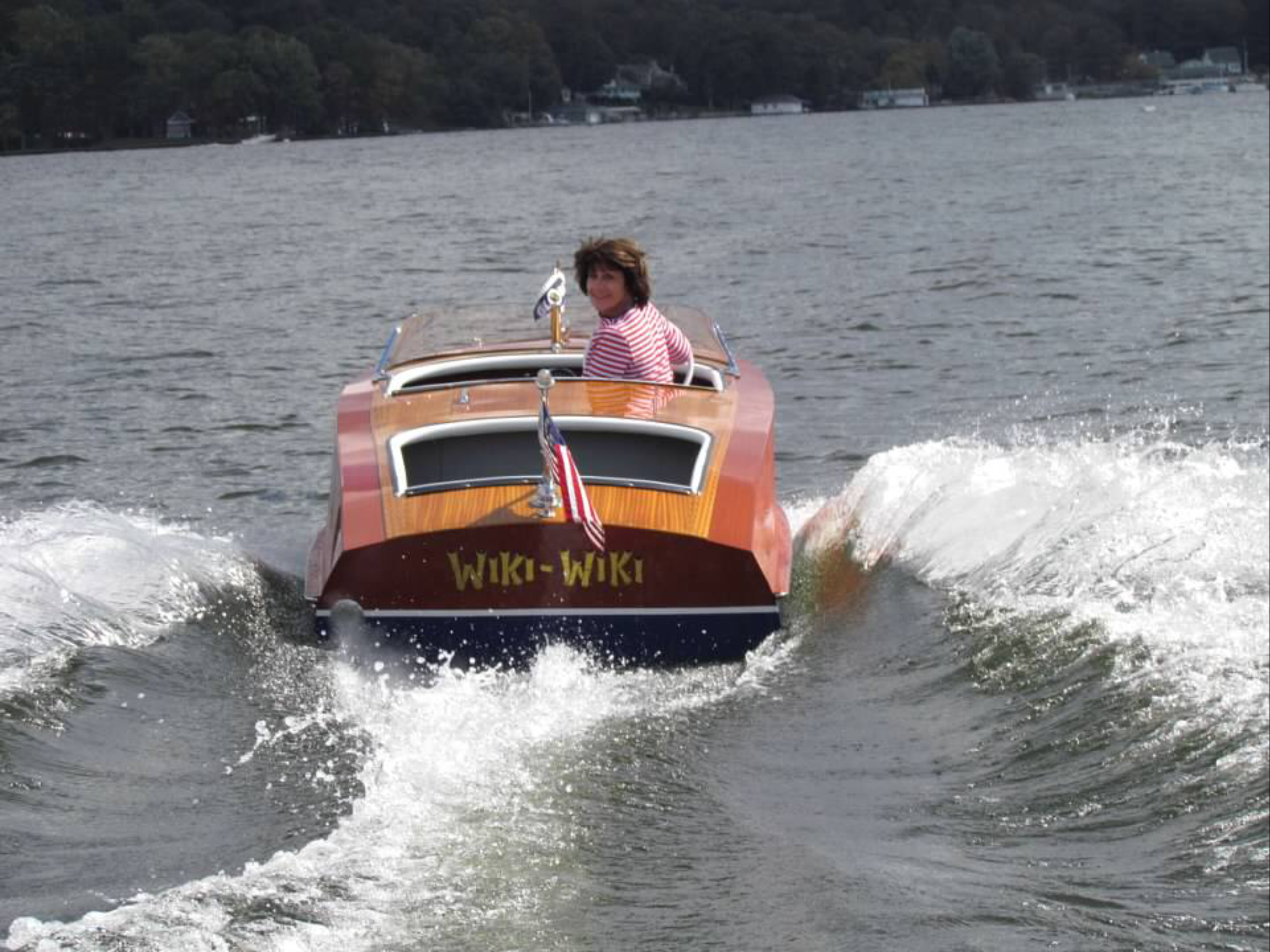 The 1949 Globe Runabout Deluxe is owned by John and Kim Kadimik. She is 14-feet and powered by a Gray Marine Phantom engine. Her name is Wiki-Wiki. John and Kim are members of the Lake Hopatcong, Wine Country, Sunnyland, and Mid-Atlantic Chapters.

Twisted is a 1957 17-foot Century converted to a custom hacker designed gentleman’s racer. Owned by Arthur and Karen Rubino of Lake Sinclair in Eatonton, Georgia. Photo was taken by a neighbor.

This is a 1954 Raveau powered by twin 1958 Mercury Mark 58’s. The boat is owned by Todd Young and Rob Ebbing of Quincy,IL. Photo by Dan Ebbing in Grafton, IL. The boat was found under a Mississippi River camp and restored 18 years ago.

Jim Alexander says, “Here’s our ’57 Century  Coronado loaded up for a run on Lake Gaston (NC/VA) for a grandson’s birthday. Lots of room, lots of zoom!”

Gene and Sue Dangel tell about Better Idea: This is our 1969 20-foot Rayson Craft Marathon race boat. Rudy Ramos (founder of Rayson Craft) designed and built this boat specifically for the 69′ Orange Bowl 250 Speed Classic which was held annually at the Miami Marine Stadium…which he won. This photo was taken at Clear Lake, CA, on the way to the NoCal/Lake Tahoe Chapter’s “Wood and Glory” show. Better Idea is maintained in original, unrestored condition, and has been awarded 1st place at the South Lake Tahoe Wooden Boat Classic. It is a blast to drive!!

1960 CustomCraft MantaRay Runabout named Remember Then is a 14-foot Stepped Hull Catamaran located in Lodi, N.J. This picture was taken at the Philadelphia Chapter ACBS show at Tuckerton Seaport, N.J. and is owned by Ron Vuyosevich.

This is a 2009 Grand-Craft 26-foot Luxury Sport with twin 375 horsepower engines and a nice little cabin forward. Last Dance was on display at the ACBS show in Racine, WI in 2017! Picture sent in by Jeff Cavanagh.

Enter your boat for the next Tuesday Tour of Classic Boats.