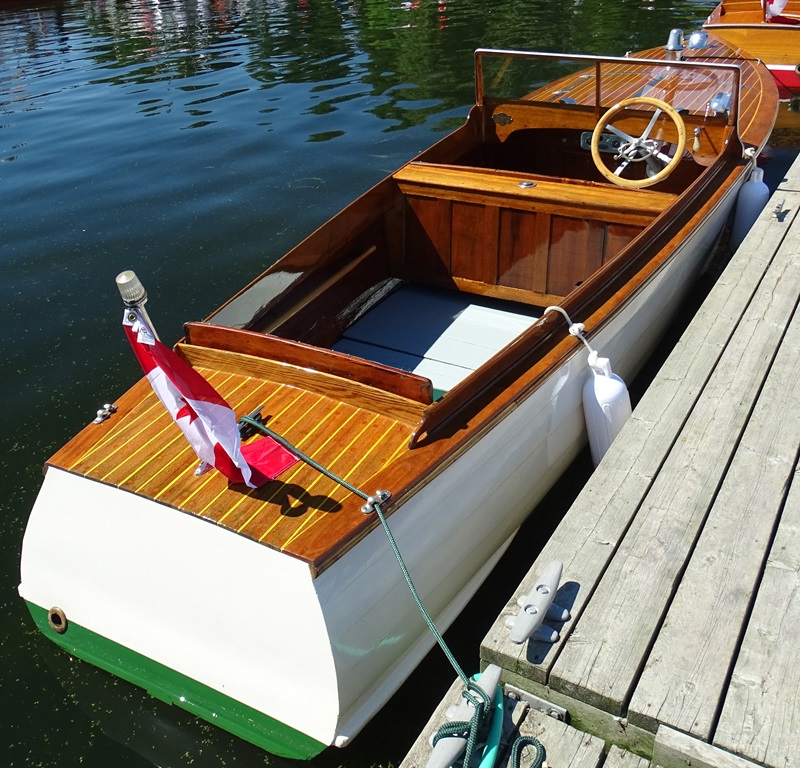 Juel is a very rare 1928 22-foot W. J. Dowsett launch powered by a 1935 4cyl 60 HP Kermath Sea Lion engine. She was built in Portland, Ontario, and has spent her entire life on Big Rideau Lake. She is currently owned by Bob Sneyd of Grand Isle, Big Rideau Lake. Photo was taken by Graeme Hoatson Beattie at the Manotick Classic Boat Club’s Antique & Classic Boat Show in Westport, ON August 2018. 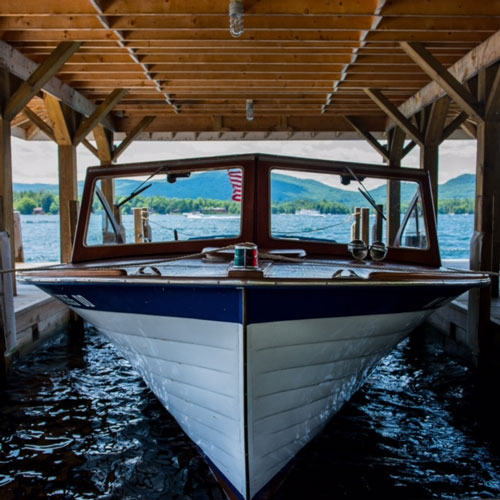 This 1964 Lyman Cruisette belongs to Barbara Shipman who says, “I inherited the boat from my father John Pyle. The boat spent the last 30 years on Lake George (NY).  We just couldn’t let it go. Pyle In is 25 feet long and has a 225 hp engine. 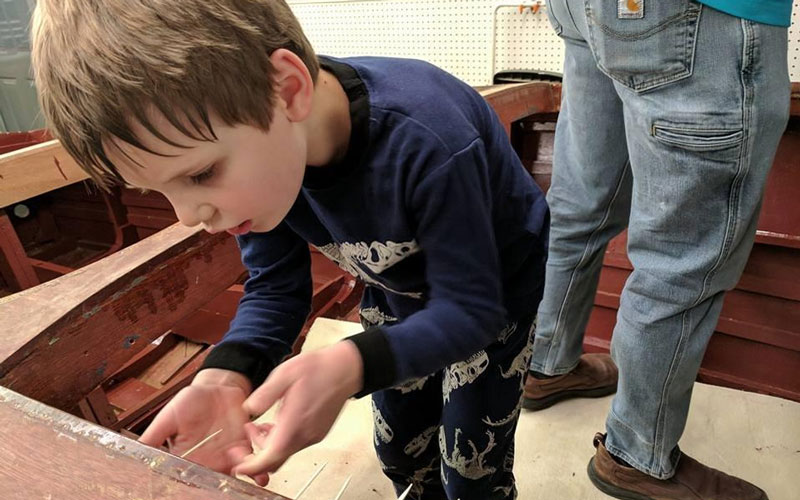 Restoration underway! Larry Amsbaugh purchased this 1941 17-foot Barrelback and started the restoration. His son and grandson are helping “Grandpa” fill holes. (Grandson Zachary wanted to do more work on our new project before bed so thus the P.Js.). With the help of Jeff Funk, the boat was shown during the ACBS International Boat Show held in Port Huron, Michigan last September. 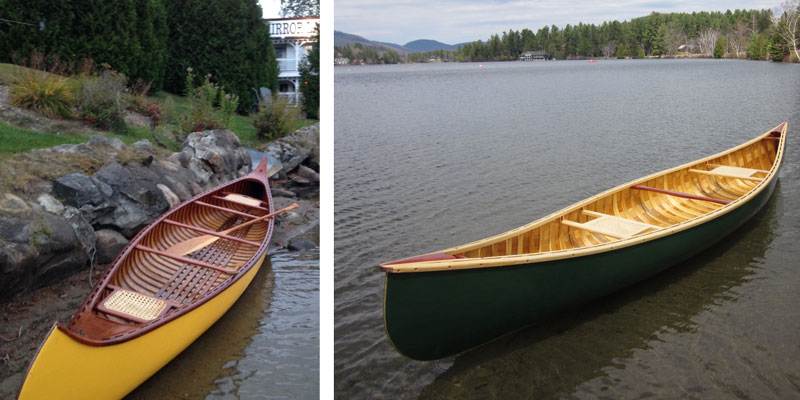 Lake Champlain members Steve and Beverly Detwiler own two canoes. The one on the left is a 1921 Old Town. On the right is Miss Kim (American Beauty), a 2014 Home-built canoe. Construction originated at the Wooden Boat School, Brooklin, Maine, in the summer of 2013 under the tutelage of Rollin Thurlow (American Beauty Designer) and subsequently completed by the owner in Lake Placid, New York. 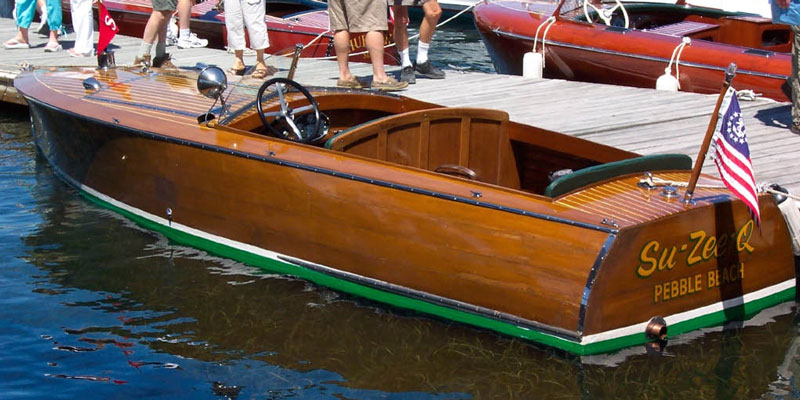 Su-Zee-Q is a 1924 Dodge 22-foot Watercar. Su-Zee-Q’s owner, Steven Charles Martini, reports in the ACBS membership file, “We purchased this Dodge Watercar (originally named “CHI CHI”) from Tamco Marine on March 29, 1986 (from Tom Fraunheim). The original owner is unknown. The single planked bottom and sides are original; however, the deck was replaced by Fraunheim previous to our ownership. The original engine was replaced with a 100 HP Continental and then later a 1958 6 cyl 100 HP Hercules. The boat has been used daily for the past 25 summers on Conesus Lake, NY. Steven Martini is a member of the Southern California Chapter. 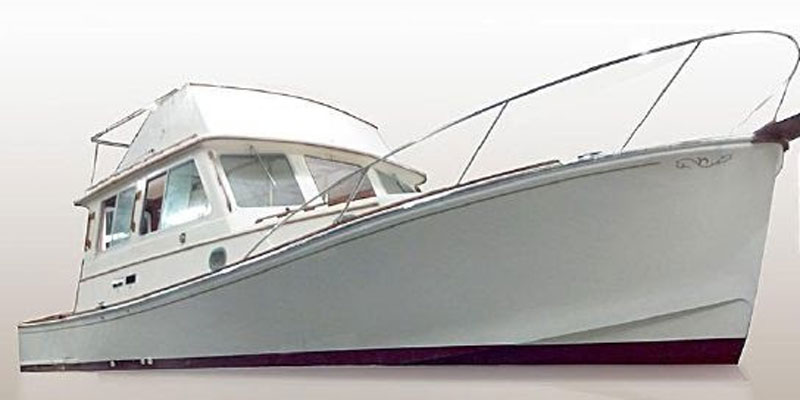 Avalon is a Shannon 36 ft Downeast model. She was built in 1993. Avalon is owned by Chesapeake Bay Chapter members Bruce Ogden and Jill Segraves. He writes, “Shannon produced only one custom version of this vessel for a customer who was transitioning from their 38′ Shannon Ketch to a Power Cruiser. We are doing a hull up refit including all new electrical (AC & DC), Rebuilt Caterpillar 3116, new tanks (water, fuel, holding), new instruments, new galley and head cabinets, countertops and fixtures, new cushions and upholstery, new floorboards and insulation, new Algrip finish on entire hull.” 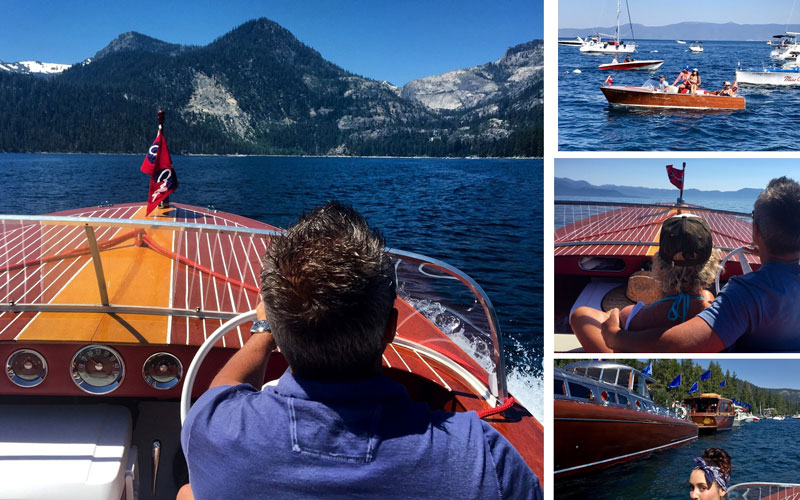 This 1960 Chris Craft 18-foot Sportsman is named Bonnie Bell.  She spent her entire life on Lake Tahoe.  Bonnie Bell is owned by Mark and Lisa Escabar.  All photos were taken with iPhone 7plus by Lisa Escabar or Jenevieve Escabar.