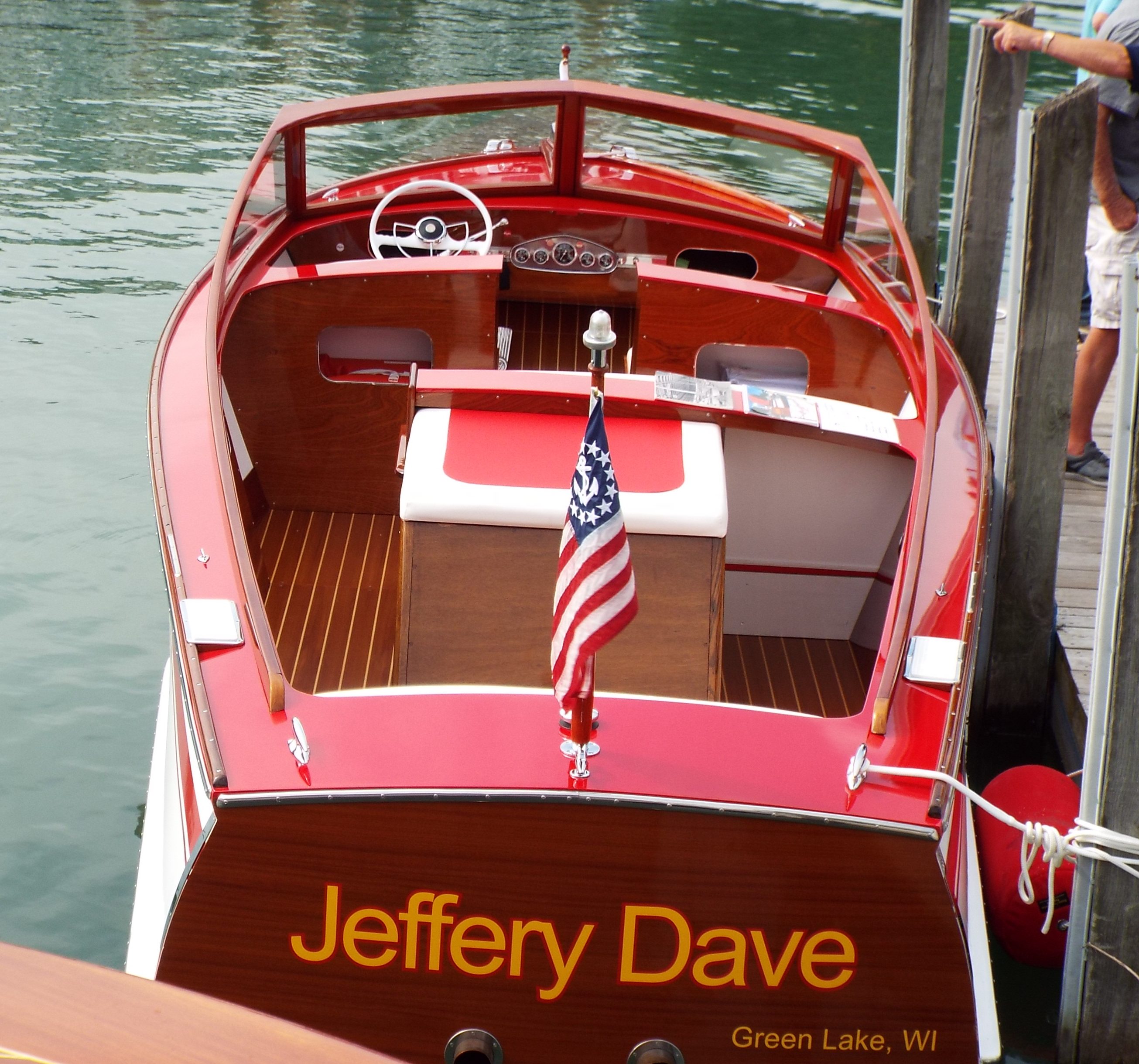 “It all began when we acquired the boat in 2016 from Pastor Keith Lingwall who had some restoration work done about 8-10 years ago. The boat had been missing the complete windshield for quite some time, maybe 30 or 40 years? After pulling up the flooring, we saw that we were in trouble! The boat needed a total restoration including a new keel, frames up to the front seats with the rest needing repair. All new wood was white oak with 2 coats of West epoxy. A new bottom was installed using the West epoxy system. The original Chrysler Royal 8 cylinder was pulled and a rebuilt 1997 350 Magnum MPI 300 HP was installed. The new engine is located 10 inches forward from the standard location allowing more aft cockpit room and easier planing effort. All new wiring, new fuel tank and dual exhaust were added. New seat bases with completely new interior upholstery (by Renee, the First Mate) was done to compliment the red and white color scheme. Top decks were painted high gloss red, custom striping was added to the sides to match “Covergirl”, our Higgins 19′ Deluxe Runabout. A custom mahogany windshield was crafted and designed trying to keep some the original design, but also to improve the appearance (I think we accomplished that!)

The name “Jeffery Dave” comes from a Dunphy Jeff’s parents bought new in 1965 and named after their 10 year old son Jeffery. So with that history in mind, it only seemed right to use that name once again.

This Higgins is roomy, dry and fun to ride in with plenty of power. It was an overwhelming restoration at times but the awards and compliments have been well worth the effort! We are happy to have saved one more rare Higgins boat and look forward to her enjoyment for many years to come!”

Wyndcrest, winner of the Platinum Award in the Preserved Antique Racer Class at the 2018 ACBS International Boat Show, is a 1931 24′ Purdy Race Boat owned by John N. Allen of Naples, FL.

Morning Lady, winner of the Platinum Award in the Preserved Antique Racer Class at the 2018 ACBS International Boat Show, is a 1941 16′ Chris-Craft  with a 125HP 6 Cylinder Chris-Craft owned by Jack K. Beatley of Columbus, OH.

Hart, winner of the Platinum Award in the Restored Antique Utility Class at the 2018 ACBS International Boat Show, is a 1940 24.5 Gar Wood Sedan with a 275HP 12 Cylinder Scripps owned by Douglas C. Morin of Bay City, MI.

Classmate, winner of the Silver Award in the Restored Classic Utility Class at the 2018 International Boat Show, is a 1973 23′ Chris-Craft XK-22 with a 225HP 8 Cylinder Volvo owned by John A. Gambill of Hillsdale, MI.