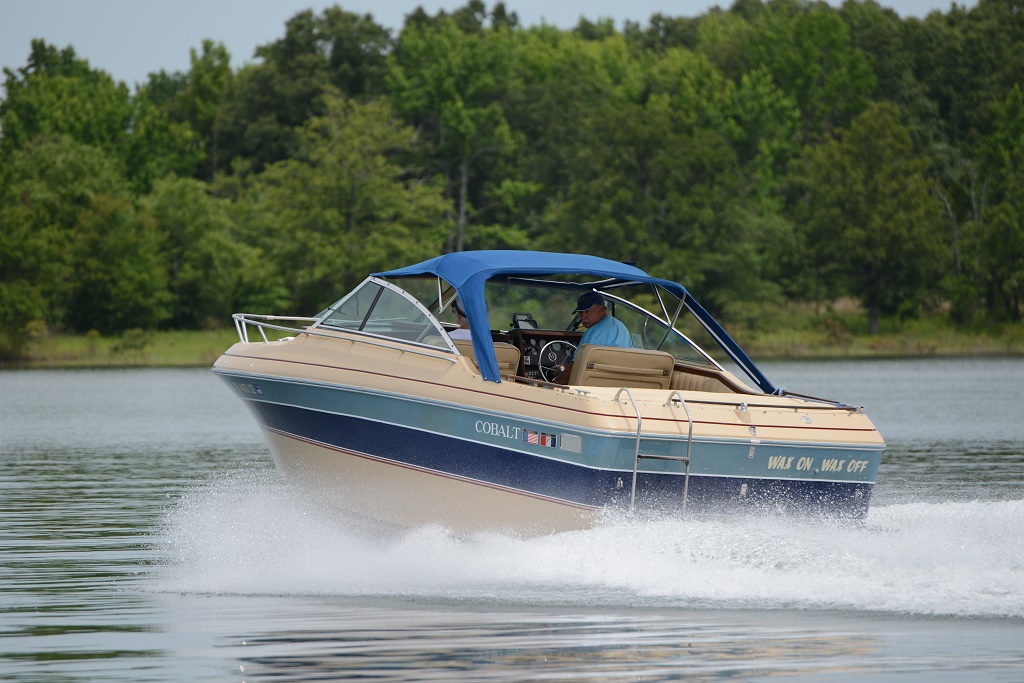 Story and photo by Forrest Bryant

Wax On Wax Off  (above) is a  1987 Cobalt 23’ Condessa powered by Mercruiser 454 with 330 hp. Owned by Scott and Linda Hendren of Guthrie, OK Wax On Wax Off is a Day Cruiser that started life at the Cobalt Neodosha, Kansas Factory in July 1986.  She was removed from the mold in August of 1986 as the third boat of the model year 1987.

She was then shipped to Harbor View Marina in Afton, Oklahoma where she was sold shortly thereafter, but we don’t know who the first owner was.  We do know that a gentleman named Brian Pogue lost the boat on a gambling debt to a Kenny Bennett early in 1994.

The boat was then purchased two weeks later by our friend Robby Rhodes who moved the boat to Lake Keystone near Tulsa, Oklahoma.

Robby named the boat Wax On Wax Off because his friends thought he spent too much time polishing the boat.

We purchased the boat from Robby in September 2009 and the boat remains on Keystone Lake today. Our home port is Pier 51 Marina, Keystone Lake, Mannford, Oklahoma.

This 1954 Glen L Design (14’6″) was built in 2009 by Chris Atwood. The boat is currently owned by Bob and Beverly Ricks. The boat is powered by a 1975 Mercury 40hp. The boat was built with African mahogany and basswood deck inlays. The boat lives on Lake Oconee, Greensboro, GA.

The Bonnie Dean is having a little fun. It’s a 2012 17′ Glen L Gentry design powered by a Chris Craft 283 (185hp). Dean and Bonnie Wilson, members of the Bob Speltz Land O’ Lakes Chapter, live in Oakdale, Minnesota. The picture was take by Dane Anderson on Lake Minnetonka a couple of days before the annual BSLOL Annual Rendezvous. There were a dozen or so boats on the lake for a promotional photo shoot creating an abundance of wake waves. Believe it or not, the Wilsons stayed mostly dry.

Joanne Hummel introduces their 1963 Owens, 28′ with a teak and mahogany deck. She was ready for the burn pile when Ronald Hummel and their son Justin (15 at the time) restored the boat to her original beauty. She is a beautiful boat and continues to add to the family’s memories.

Shady Lady is owned by Elmer and Judy Thomas. She is a 1965 21′ Lyman Utility with AMC V8 power. her homeport is Nashville, Tennessee.