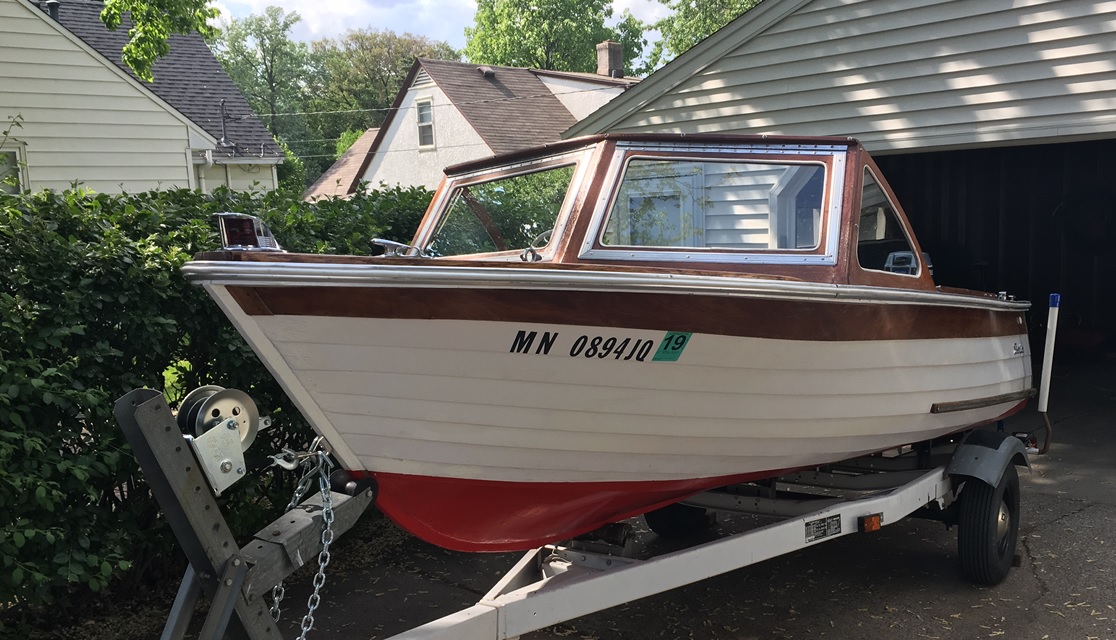 This 1960 Thompson Sea Coaster is owned by Josh and Laura Lindquist. They are new to ACBS and the Bob Speltz Land-O-Lakes chapter. The Thompson was purchased in December 2017 and the Lindquists joined the BSLOL soon after attending the Minneapolis Boat Show and talking with several of its members. Through the expertise and kindness of several of the members Josh was able to learn about his boat and get her ready for a summer on the water. Josh gives thanks to his new friends for all their help with his dive into the world of classic boats.

This 1957 HiLiner Speedstar is 14′ with a 33hp Evinruder Skitwin. The photo was taken in Sodus Point, NY this past summer. Nick DeYoung, owner, completed the restoration during last winter. Nick is a member of the Finger Lakes Chapter (NY).

This photo was taken by the niece of ACBS member Bob McMahon while spending Thanksgiving in Dubai. Bob thinks the boat was built in Turkey where they still build yachts with wood hulls.

In response to the Best Spot to Tie Up article from Hagerty Marine Division posted last week on the ACBS website, Terry Garbig said, “my favorite spot is wonderful Silver Glen Springs located at the southwest end of the Lake George in the Ocala National Forest in Florida. It is a 1/4 mile run off from Lake George (Florida’s 2nd largest lake) which makes up part of the St. Johns River which flows north to Jacksonville into the Ocean. It is a mega spring flowing millions of gallons of crystal clear water daily.

I used to live there on a 1917 54′ Trumpy Flush Deck Cruising House Boat. At that time the boat was owned by the du Ponts and had been in the du Pont family for many generations. The boat is now owned by the State of Florida. The boat was first made famous by the filming and originating spot of the movie The Yearling, a story about a young boy and his young yearling deer. Marjorie Kenning Rawlings wrote this famous book about this very spot.”

Owners: John and Mollie Mulheran, members of the Bob Speltz Land O’ Lakes Chapter. The boat is kept at Port of Bay Lake, Minnesota. The photo  was taken by John during a quiet cruise at dusk.

Miss Jane is a 1936 18′ Billy Johnson runabout powered by its original 45hp 4cyl Lycoming engine. Manotick Classic Boat Club Past President, Carman Keyes, purchased her when only 18 years old. He has kept her in show condition ever since. The picture was taken on the Ottawa River near Arnprior, Ontario during the club’s Chats Lake Boat Club Tour on September 8, 2018 by Graeme Hoatson Beattie, MCBC Secretary and Facebook Administrator.