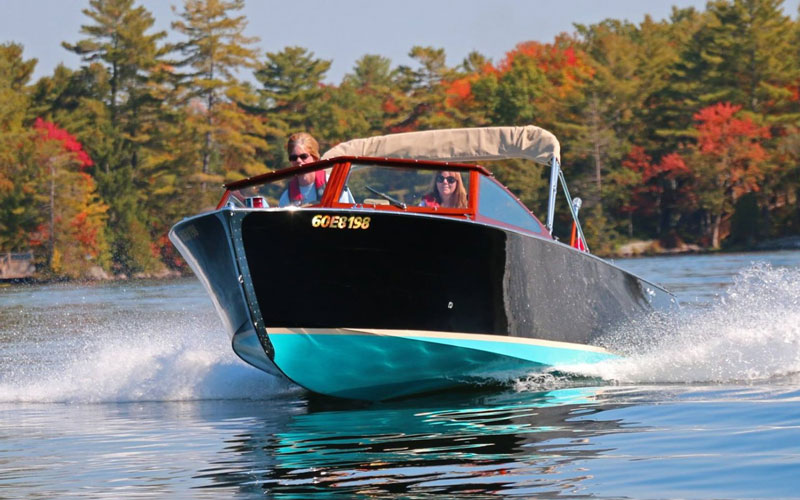 Wow!  Look at the colors in the picture that leads us into this week’s Tuesday Tour of Vintage Boats.

Aqua Velvet is a 1968 Classic Greavette 22′ Executive powered with a Chevrolet 327 engine.  Aqua Velvet is owned by Richard and Linda Hughes, Toronto Chapter members of ACBS. 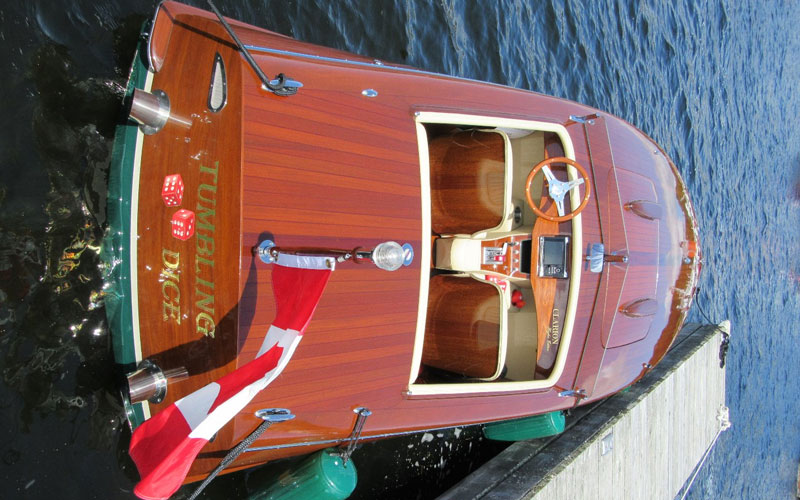 Not all Classic boats are old.  There are Contemporary wooden boats built in a classic style.  Richard and Linda Hughes also own this Tumbling Dice, 2015 Contemporary Clarion 21 which is powered with a Mercruiser 6.2L engine.

ACBS President Rich Lepping and other Glacier Lakes Chapter members attended a boat show at Manitowish Waters, Wisconsin.  That’s where Rich took this picture of a 1940 Stephens towed by a 1930 Model A.  What an eye-catching pair.  Rich said, “Check out the wheels on the trailer which was built from another model A.  It’s cool!  Won a number of awards.  Great show!!  Happy Memorial Day weekend!”

A 1956 Johnson 10 hp outboard is enough power for this 1956 14 ft Peterborough.  Carol Arsenault, member of the Manotick Chapter, named her Soggy Bottom. 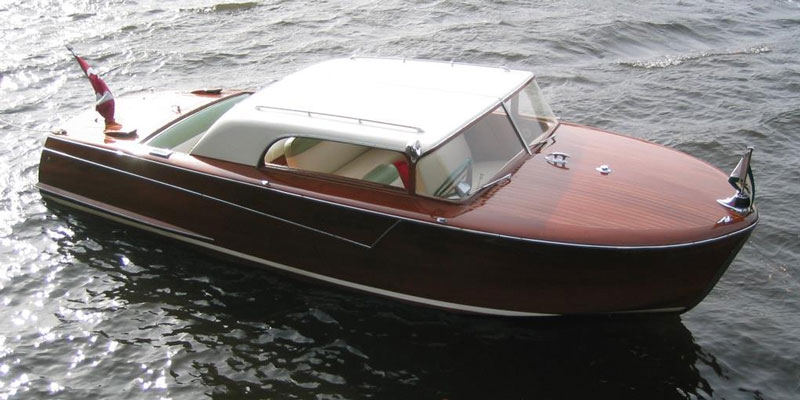 Santimo is the name of this 1958 Shepherd Hardtop owned by Scott and Derra Dunsmoor, Toronto Chapter members.  Scott wrote, “Purchased by my Grandfather, Andrew Thomson, in 1960 from Dawson Marine.  Andy died in 1979 and my Grandmother, Catherine, attempt to sell it for 4 years and then asked if I wanted it – 18 years old at the time – YES was the answer.  I’ve taken care of Andy’s boat for 28 years – he only owned it for 19 years but it will always be his boat.  Santimo was the name of my Great-Grandparents cottage since 1926 after the original cottage “Bide-A-Wee” of 1919 burned down.  Santimo has been enjoyed on the same lake since 1960 – Gloucester Pool, Ontario.” 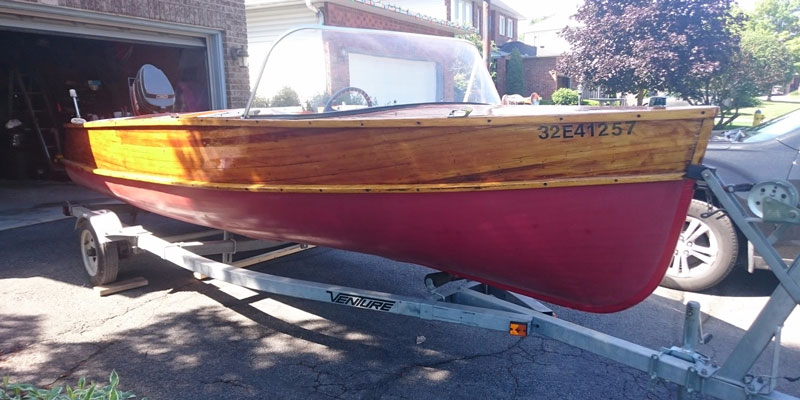 Eleven Giesler boats are registered in the ACBS membership files. This one named Tonic is owned by Glenn and Wendy Murray, members of the Manotick Chapter.  Tonic is a 1972 Georgian Bay model 18′ long.  Her outboard motor is a 1989 Mariner 45 hp.

This one-of-a-kind boat named Prop Wash is owned by Paul and Cynthia Miller, members of the Blackhawk and Toronto Chapters.  Paul said in their membership file, ” Brainchild of Philip Christiansen of Phelps, WI., the boat was frist put on paper as a rough drawing in January of 1943.  The boat was designed with an airplane engine and propeller to power the boat that looks like a WW II P-40 Warhawk fighter.  Philip first wrote to A.M. Deering Engineering in Chicago on 1/13/1944 replying to an ad in a boat magazine offering services.  Deering drew up the plans and blueprints I have to this day.  Philip made his patent application for the boat on 3/7/1945 and was issued his patent 3/9/1949.  Hemming Larsen of Menominee, MI. was contracted sometime in late 1946 to build the boat that was completed for the Milwaukee Sentinel Sport Show in March of 1947.  This is the only boat built from those plans.  The boat is powered by a Continental C-125-2 airplane engine like the one originally purchased by Philip in 1947 at a cost of $854.53 plus shipping.  The motor currently installed is less than 200 digits off the original engine’s serial number.  Due to current FAA and USCG regulations, we are not able to operate the boat as originally configured.”

One of these boats has been on tour before.  Do you know which one?