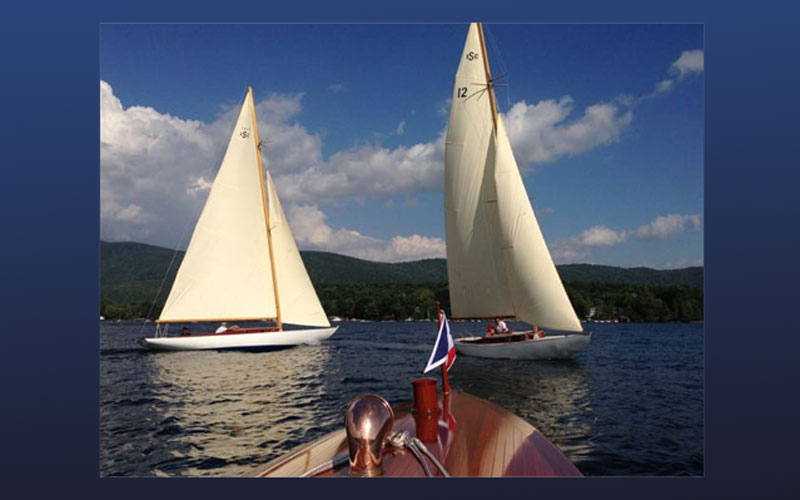 John and Helen-Jo Kelly have a variety of boats including these two beautiful 1926 Henry B. Nevins sailboats.  The Kellys are not only preserving the boats but also preserving and sharing their history.  Entered in their membership file is this information:

The Sound Inter Club class sailboat was designed by the prolific and ground-breaking boat designer, Charles D. Mower. Only 28 of these impressive sailing boats were built – most all of them in 1926 by the craftsmen at the Nevins Boatyard on City Island.

The Sound Inter Clubs were raced on Long Island Sound throughout the late 1920s by the who’s who of yacht racing. Some of the iSc yachtsmen sailed on America’s Cup Defenders. Rather than hull numbers, the Sound Inter Clubs used sail numbers, and the owners would change boats but keep their sails, so these numbers rotated among the boats. Careful and extensive research, in collaboration with Mystic Seaport and many others, has been required to track owners and sail numbers over the years.

By the 1940s as many as ten Sound Inter Clubs made their way to Lake George, NY, where they became the largest and fastest sailboats on the lake. Today, very few of these boats remain – perhaps as few as 5. See ACBS’s Rudder magazine (Vol. 23, No. 4, Spring 2014) for information.

Caprice and her sister ship, Ghost were painstakingly restored by Reuben Smith and his crew, using original methods and materials, preserving as much of the original as possible.  Caprice is on the right in the picture above, Ghost on the left. 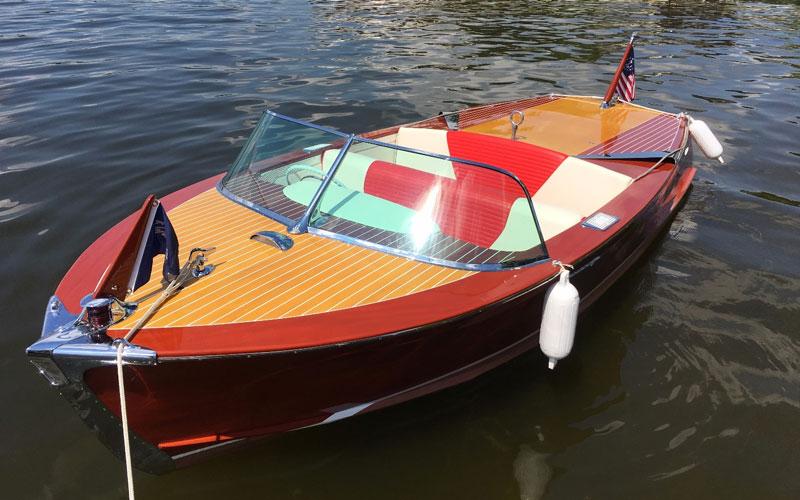 Perfect Pitch is a 1957 Century Arabian owned by Louis and Sarah Fisher, members of the Adirondack Chapter.  Perfect Pitch received a Gold Award at the 2017 ACBS International Boat Show.  Here is her “pedigree” filed in the ACBS Membership file.

(editor’s note:  Sorry for the long text block, but I wanted to share an example of a great way to document the value and uniqueness of your own classic boat.) 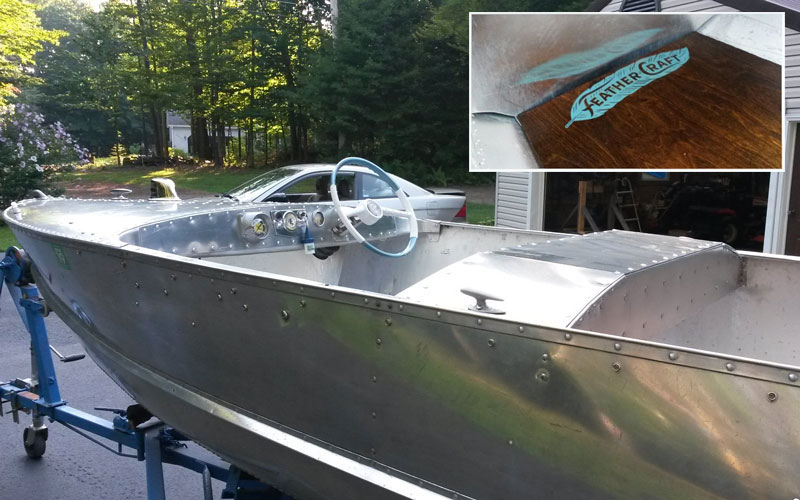 Tin Fish is a 1956 Feather Craft 15′ Vagabond I.  Tin Fish is owned by Mark Fidler and Teresa Andrews.  Mark says, “Purchased in 2015. This boat was “hacked up” and almost totally unoriginal. New tin work included bulkhead, centerdeck, dash and front seat. Stringers were reinforced and new floorboards added along with new gauges and wiring. A rebuilt Evinrude Lark V was rebuilt and installed.” 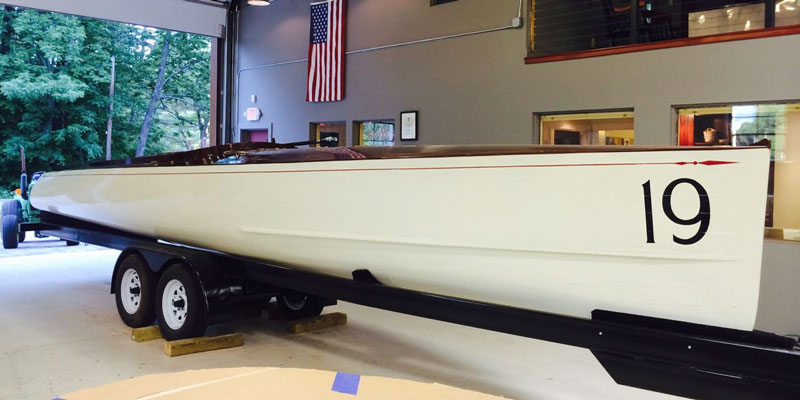 We started this week’s Tour with two boats in John and Helen-Jo Kelly’s collection and we’ll end with two more of theirs.  Number 19 is an Historic 1910 Layare 28 ft Number Boat. From the ACBS membership files: “The Thousand Islands One-Design, or Number Boat, is a 1909 design by Charles D. Mower, was intended as a fast racing boat that could also serve as a family runabout. Notably, Mower also designed the 1926 Sound Inter Club, a sailboat that acted much the same way – fast for racing, but safe and fun for the family.

The original 20 Number boats were built by the Leyare Boat Works in Ogdensburg and sold on a subscription basis, each boat given a number in the order purchased. These numbers were painted large on the topside at the bow so the boats could be easily identified while racing. Over the years these boats became known locally as the “Number Boats.”

Of the 20 original boats built, only six are known to remain.

Number 19 was originally subscribed by Mrs. A.G. Miles and was never given a name. The boat was eventually given to the Antique Boat Museum by an anonymous donor, then sold at auction in Clayton, NY in the late 1990s. The late Tom Mittler, a noted boat collector and vintage racer, supported a painstaking restoration focused on maintaining as much of the original boat as possible.

In 2014, Number 19 was purchased by John E. Kelly III, who is having the restoration completed by Reuben Smith’s Tumblehome Boatshop.

Two additional Number Boats may be seen crashing about the Saint Lawrence River and lakes of the Adirondacks: Numbers 21 and 22. These new boats were built with fiberglass foamcore hulls and traditional deck interior, and they maintain the same classic characteristics Mower intended.

For more information on the Number Boats, see “Number Boats: Treasures of the Thousand Islands” by Emmett Smith, WoodenBoat magazine (No. 220, May/June 2011) or www.numberboat.com.