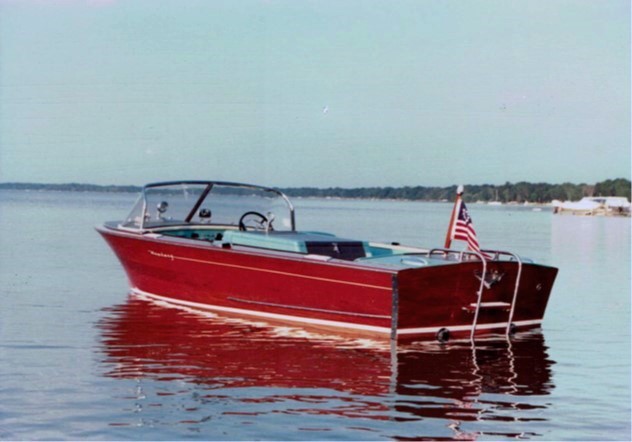 The story of this 1965 Resorter ’17 (RS6558), originally christened “Carol Ann 3rd” after my two oldest sisters, begins on Otter Tail Lake in west central Minnesota. My father, a commercial and custom-built home contractor, built a summer cabin for our family in 1962, a year before I was even born, about a six-hour drive north from our home in Le Mars, IA. After building the cabin, he brought up our 1942 Chris-Craft Deluxe, previously used only on the Missouri River, near Yankton, SD. After a few years the need for more power to water ski led to the purchase of this 1965 17’ Century Resorter. Going from an in-line six cylinder in the old Chris-Craft to a 240hp Ford Interceptor V-8 was just the change needed, both for both cruising on the 14,753-acre lake, as well as keeping my three middle brothers rouge ski-team in tow.

She served the family well for over 30 years with only two basic refinish jobs, one in 1977 and the second one around 1987. During the latter I replaced the lower transom plank and subsequently the classic Century de-laminated lower transom frame. It was more of a repair than a restoration, with the intent to keep her in operation a little bit longer.

Around the summer of 1996, an afternoon cruise along the lake shore turned startling when a sudden bang and the sound of grinding metal shut the engine down, it wouldn’t turn over. After walking the boat home, it was noticed that a significant amount of oil was in the bilge.
The catastrophic engine failure happened due to the piston in the #8 cylinder deciding it wanted to be free from the crankshaft, sheering its rod just below the wrist pin. The rod, now free of it’s manic piston, decided to punch out the block on both sides, taking the lip of the oil pan with it, as well as the camshaft before lodging itself into the crankshaft and bending in half; sheer mechanical carnage. The water from the cooling jacket ran into the pan displacing the oil into the bilge, enough to make you cry. The boat only had 240 original engine hours.

With the boat out of the lake and back on the trailer, I cleaned up the bilge with degreaser the best I could, but the damage had already been done. The less than stellar bottom planks, now 30 years old, had soaked the oil into their seams. After storing the boat for the next year, it was decided to bring her back to my home in Minneapolis to start a restoration project. I brought the engine home first and performed a postmortem, determining the head gasket had blown allowing water to enter the #8 cylinder. Being unable to compress the water, the rod most likely sheered under the force.

Coming from a family of avid woodworkers I felt competent to take on the project. I started on the restoration, completely disassembling the interior and removing all exterior hardware. I braced the inside and prepared it for a flip. A pizza party lured my coworkers to my house where we picked up and flipped the boat onto a prepared cradle. I spent the rest of 1998 stripping the many layers of bottom paint.

The project went on hold in 1999 when we decided to move. The boat and all her entrails were packed up and relocated to my new residence around 20 miles away. With a new home and a growing family, life tends to dictate where your time, money and resources are allocated. The next five years were spent building a new workshop and creating a heated space to work on the boat.

Fast forward 15 years. The boat has been in a continuous stage of restoration for the past 15 years now. They say time flies when you’re having fun. After disassembling the entire bottom from planks to battens to frames, patiently documenting every bolt and screw size and location along the way. I found many areas of dry-rot and several cracked frames. I finally reached a point about five years ago when I was no longer disassembling and inspecting, but rather starting to reassemble. Up until then my constant fear was that the boat was rapidly becoming a pattern to build a new boat, almost overwhelming at times, and causing the project to drag on. In 2018 I completed the transom framing and now have almost all of the bottom frames done, ready to reset the keel. I’m currently looking for some white oak stock for the replacement chines. I’m using the original factory assembly design, standard batten-seam construction, with the exception of 3M 5200 Marine adhesive for bedding after having a conversation with some former Century Boat Company employees. I have substituted white oak for a few mahogany frames in the transom.

Last year I reached a crossroad and had to stop the majority of all my projects. At a pre-op physical for a torn rotator cuff in my shoulder, my doctor found a tennis-ball size tumor in my neck, and further testing found a large mass in my lung, I had zero symptoms. I was diagnosed with Stage 2, Non-Hodgkin’s Lymphoma. My world stopped. After four rounds of chemotherapy and radiation, I am now in remission.

I have made it a one of my life goals to get this boat completed and back in the water. I may need some advice when planking time comes along, but I’m sure there will be someone out there to advise me along the way, I’ll gladly accept the help.

You never know what life has prepared for you along the way, it has a way of changing your path and keep you from completing your goals. Sometimes it’s two steps forward, two steps back, but with Gods help and support from family and friends, you find a way to keep going.