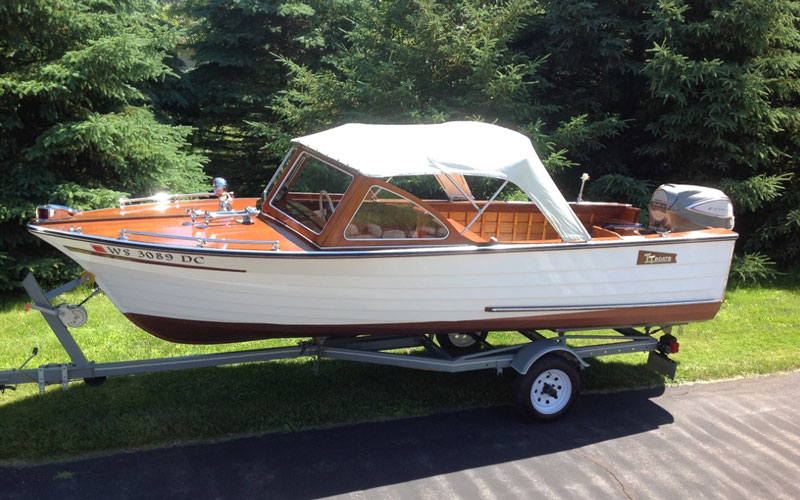 Made in Wisconsin! Not just cheese – but antique and classic boats.

The 2017 ACBS International Boat Show (September 6-9) in Racine, Wisconsin will be the premier show for antique and classic boats of all ages, styles, and composition. Among the vintage boats will be several that were manufactured right in Wisconsin.

Pictured above is Old School, a 1963 T&T Boats, Inc., 16′ White Cap model boat manufactured in Wausaukee, Wisconsin.  Here is the biography of Old School shared with us by Jill and Perry Edwards, members of the Glacier Lakes Chapter:

I purchased this unique wooden outboard last Fall (2016). It had at least two previous owners who had painted it with aqua colored accents.

I was not familiar with the T & T boat brand and after some research I learned that Glenn Thompson and his son Kenny had operated T&T Boats in Wausaukee, Wisconsin.

Glenn originally was part of the Thompson Brothers Boat Mfg. Company in Peshtigo, Wisc., but split off from the company to begin his own operation in Wausaukee. From 1960 through 1964 he designed and built wooden lapstrake boats. This White Cap model is one of the boats Glenn designed. Unfortunately, T & T Boats only lasted about 4 and 1/2 years and closed in early 1965.

I learned from ACBS records that approximately five T&T boats are registered but none of them are White Cap models. This may be the only White Cap that still exists.

I was happy to find T&T history and photos of this model online which helped me to refinish the boat with the originally designed coloring.

Her nickname is “Old School“.

Other Wisconsin manufacturers of vintage boats will surely be represented at the show.  Look for boats by:

Manufacturers in this list were mentioned in The Real Runabouts series written by Bob Speltz.