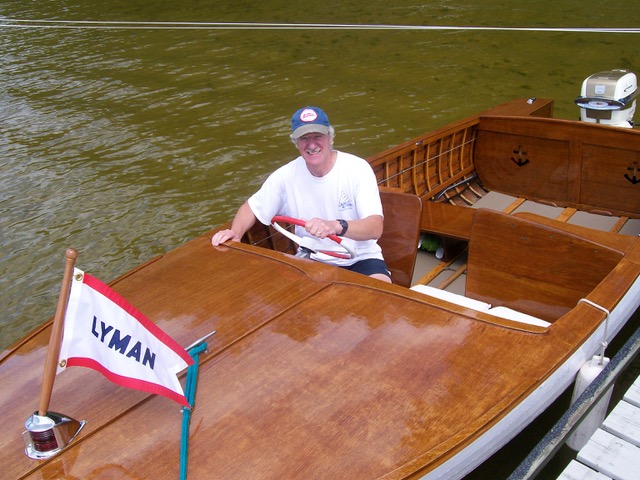 By John Young member of the Water Wonderland chapter

As far back as I can remember I have known the 1958 Lyman I own. Our neighbor on Douglas Lake, Michigan, who originally owned the boat, would use it as the committee boat for our local sailboat fleet races. Sometimes Mom and I would go along and I always loved to watch the wake develop as we slowly picked up speed. In 1975, when I was 15, I got a call from our neighbor asking if I would help him load the boat on a trailer to take it to the dump. He had tried to sell it all summer for $50 with motor and everything with out success. On the way to the dump I talked him into letting me have it if it was alright with my parents. They said yes, so the next summer I spent refinishing it inside and out and started using it the following summer for waterskiing, committee boat, and visiting friends around the lake.

The original 35hp Johnson died after a few years and I replaced it with a 1959 Evenrude 35hp. By 1987 the decks were coming apart. I was working by then and was renting a house in Ann Arbor with a garage so I bought a trailer, took it home, and started to restore it. I removed everything down to planks and ribs, stripped the finish inside and out, and started repairing or replacing ribs, keelsons, planks, transom or any other place I found rot. I didn’t feel up to replacing the gunnels but fortunately, Lyman was still in business and I was able to order a new set of gunnels which I picked up from the factory in Sandusky. I’ll always remember that visit, seeing the big band saws, the iron strong-backs, and talking to some of the workers who had worked there when they were still making new wooden boats.

I had refinished the hull and interior and was ready to replace the decks when I got married and was about to move to Seattle. The day before we left I decided I couldn’t leave the Lyman behind so the next morning I scurried around and found a hitch that would fit the rental truck and set off with boat in tow. Over the next two months, while interviewing for a job, I finished the decks and at the end of the summer of 1989, I rechristened the boat in Lake Washington.

During the 3 years we were there, we used the boat on several of the lakes there and once in Puget Sound down by Olympia. Returning to Michigan in 1992, I started using it on Douglas lake again and as our family grew, taught our kids to waterski and use the boat. I joined the ACBS in the 90’s and in 2008, for the boats 50th anniversary, participated in a cruise of the inland waterway from Alanson to Indian River, where the boat was originally purchased, in a recreation of its maiden voyage. I found a 1958 Johnson like the original motor around that time and continued to use the boat until 2016 when I discovered several of the bottom planks had rot and, since I had just finished a complete restoration of a 1953 Chris Craft 17ft Sportsman, I put the boat in storage until either I or my son have time to repair it. I’m very attached to “The Lyman” as are my kids and I hope it will be part of our family for a long time to come.