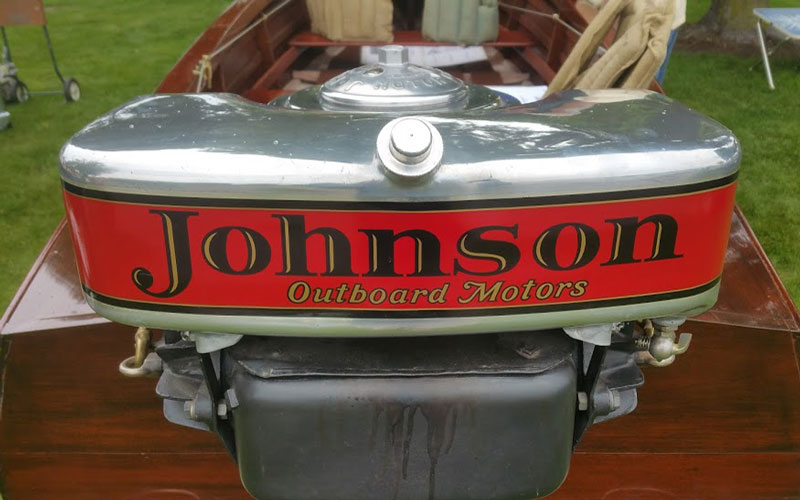 The 2017 Spring Lake, Michigan boat show offered something vintage for everyone.

This report and pictures were submitted by Dennis Mykols.

The 14th running of this small town Wooden and Classic Boat Show is in a park like setting on the Grand River, called Mill Point Park, and it offers everything a show site could ask for, shady trees, water on three sides, new floating docks, and a launching ramp on site to boot.

This year the show organizers went the extra mile to make the show much more interesting by inviting two other vintage clubs to join in on displaying their “toys”. The Wolverine Chapter of the Antique Outboard Motor Club ( A.O.M.C.) joined forces with the classic boat show and held one of their meets, with many fine examples of turn of the century running outboards. In fact, they ran a 100-year-old Evinrude outboard back and forth along the floating docks, on the back of an aluminum fishing boat. A big round of applause was given by the appreciative crowd. The motor purred along and never missed a beat.

The second club to bring out their toys, was the West Michigan Chapter of the Antique Farm Power Club, displaying three vintage tractors, a “Hit and Miss” engine, and a Ford Model T. They also had a miniature steam tractor riding around the grounds blowing his high-pitched whistle. 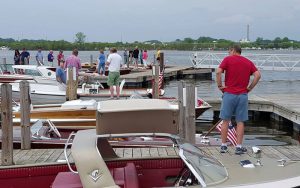 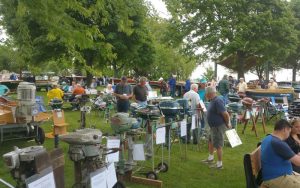 The “Cross Marketing” efforts paid off for each group, affording larger crowds to ask questions, be educated by the exhibitors, and marvel at the variety of craftsmanship, than if the clubs held separate individual shows.

In talking to several spectators as they were leaving the show, we found that many were impressed with the quality and variety. A lot enjoyed the learning aspect of the time spent, reading the many show boards, and restoration pictures, and the interaction with all the exhibitors. Each antique outboard motor had a display card, outlining the historical significance of each motor.

Other efforts by the show organizers included asking the Century Boat Club to attend, as the featured Marque, and to invite the local A.C.B.S. Water Wonderland Chapter to attend as a Chapter outing. A big help making the show special was Hagerty Insurance, and the local Big Brother, Big Sisters Organization, that made the “Youth Judging Program” a big success and helped four young children learn a lot about classic boats. The “Judges” were very inquisitive, and the interaction with the boat owners provided a fun time for not only the kids, but the boat owners as well. The “Littles” got a real touch and feel education while judging seven boats and stopping by four others to learn what made that vessel different from others they had seen. Learning what makes a three point hydro fly, and comparing the design of a “Barrel Back” to a normal transom next to it was also entertaining. 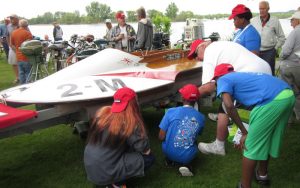 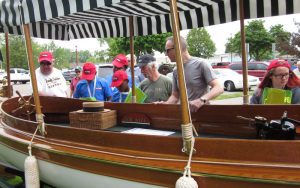 All in all this year’s show had something for everyone. People love all things Vintage. The show Organizers are already thinking of inviting the Tin Can Tourists Vintage R.V. Club to the 2018 Show. Then we call it a “Vintage FOUR RING Circus”…

Thank you to Dennis Mykols for sharing this interesting report and pictures.