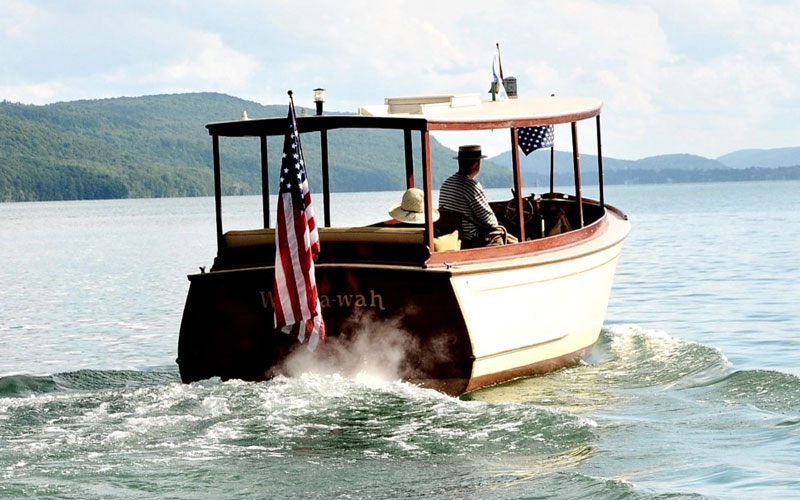 This is the restoration story of Wah-ta-wah, a 1932 Richardson Launch, written by Bill Michaels, a member of Finger Lakes Chapter,

In 1972 driving down Goose Street [Cooperstown, NY] just three doors from our family business, a cider mill, my dad would always say “there’s a big old boat in that barn” as we would pass the Foutch house.  Turning my head I would think to myself that “it can’t be that big to fit in such a small barn.”

Thirty-three years later I finally gained the courage to knock on the door and ask to see it.  Never being overly neighborly, I felt obtrusive asking to see a boat that might not even be there.  Mr. Foutch came to the door and said that he would be pleased to show me his boat.  Following the old neighbor suffering from severe arthritis we made it through the first chamber of the barn, and then turning right the barn widened and majestically resting on a skid was a big white hull.  Hidden away covered with dust and pigeon droppings, the entire boat seemed to be caught in a slumber that time forgot.  The hull was straight and true.  The cabin, obviously a mid-century addition, was still intact with deck chairs and cushions of the time.  He advised that the engine was not seized and that the process of “restoration” was ongoing.  The restoration that appeared to have started in 1964 seemed to have stalled shortly after.  I thanked Mr. Foutch for the viewing and told him that I would be interested in purchasing the boat if he were to consider selling it.

Later that year Mr. Foutch passed on.  I seldom thought of the boat thinking that it would rest eternally in the barn.  One day while I was nearby Mrs. Foutch asked if I was still interested in the boat.  I replied a quick “of course” and asked for another look with someone who might be able to restore it.  The day came, and with the blessing of my wife and my restorer, Tom Krieg, we made an offer with the contingency that it would rest yet another year in the barn.  Armed with a collection of pictures I spent the next year researching information about the boat which was known as a Richardson.  Finding the Richardson’s Owners Association’s website I came across Bill Lindquist’s book on the history of the company.   Concluding that the boat was not a stock production Cruiseabout common for the day, I was free to restore the boat to my liking while still keeping it as true as possible to the original frame. 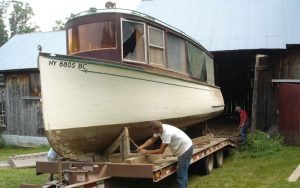 Removal day came. The boat was drawn from the barn to see the first light of day in 43 years.  We held our breath as the skid was pulled with an excavator onto a flatbed trail for the short trip to the boat shop where it would spend the next five months.  First the engine was removed and sent to Drake Engines in Rochester, NY for a thorough rebuild.  After a close inspection Tom and I decided on the removal of the add-on cabin to restore the boat to a covered launch design.  Before the Foutch’s use, the cabin was added for regular service as a tour boat named The Blue Mist, accommodating 18 passengers and a captain.   Fortunately the previous owners in adding the cabin did not attack the original design or wood detail.  With the cabin removed the beauty of the original lines could be fully appreciated.  The hull, cedar over oak, needed only replacement in the transom and bow, an easy fix according to Tom.  The top, which was most likely original canvas, had been replaced with plywood and then fiberglassed.  We decided to just sand and paint the top.  Keeping things simple and easy to clean was the theme.  The rotten decking was replaced, then sealed with epoxy and painted replacing the original stretched and painted canvas.  All the mahogany was stripped, stained and varnished.  The hull was sanded and painted a yellow-tinted white.  Next came a fabricated trailer and the skid cradles were transferred to it.  After a fresh coat of copper bottom paint the boat was moved to its new trailer.  The engine was not expected until spring so the boat was placed in storage.  Wintertime was spent searching for furnishings to complete the project such as chairs, cushions and canvas work to enclose the helm. 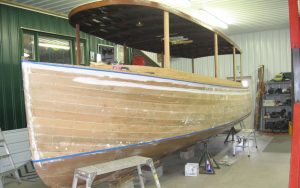 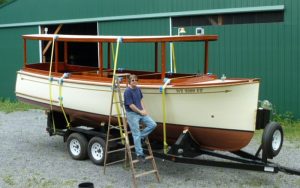 For a name we selected “Wah-ta-wah” from James Fenimore Cooper’s Leatherstocking Tale, “The Deerslayer.”  In the novel Chingachgook and the Indian Princess Wah-ta-wah had an affair at Three Mile Point on Glimmerglass (our Otsego Lake.)   Currently two early 1900 Elco displacement launches, 45 and 55 foot, grace Otsego Lake named the Narra Matta and the Chief Uncas after other Cooper characters.  We were very eager to have our boat joining these historic vessels on Otsego.

Spring came along with the glistening engine from Drake.  Installed with a new aluminum gas tank and replacement muffler, the Wah-ta-wah was ready to be launched.  Launch day was uneventful as she lay in the slings quickly soaking up and not leaking more than anticipated.  The boat arrived at our dock and was soon fitted out with chairs and all the necessities of leisurely cruising.

Always short on time I mistakenly skipped the “shake down cruise” to plan a maiden voyage coupled with a birthday celebration including our two small children, the 84-year old celebrant, new puppy, old dog and my wife who knew all too well how much was spent on the restoration.  With everyone on board I started her up and headed up the lake.  Then came the smell of burning paint: it was coming from what I now know to be a “hot joint” connecting the exhaust and the manifold that is not water cooled.  This smell and the sight of wafting smoke coming from the temporary engine box were a concern for all on board, including the captain.  I decided to “let her rest” as we plated the appetizers and poured the bubbly for Wah-ta-wah’s christening.   Starting off again the boat did not move as the transmission would not engage.  After fifteen minutes of tinkering with an engine that I know little about plus twenty-five “I told you so’s” I called a friend for a tow back home.  He came out in a hurry proceeding to circle us at half throttle with his wake slowly coming on us in one huge tidal flow.  With glasses crashing, food flying and children (and wife) screaming, I scurried about trying to collect all the flying debris.  The puppy and dog proceeded eagerly to consume all the food that was thrown about.  The 84th birthday gal simply held on for the ride.  After the waves subsided I counted the passengers to be sure that we all survived.  The tow home was long and slow with conversation void of anything complimentary of our new boat or related costs. 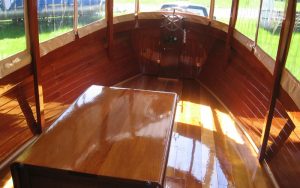 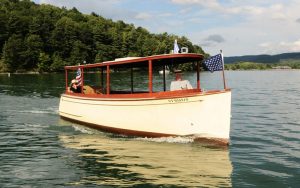 The next few weeks were spent on short solo voyages after receiving telephone instruction on how to repair the transmission.  A persistent oil leak from somewhere inaccessible prompted the decision to remove the engine and send it back to Drake for further repair.  Now halfway through our all too short summer boating season my standing as a boat “investor” and captain of fun-on-the-water was waning with each day the Wah-ta-wah was not running.

Finally the engine was returned.  We were more than ready to enjoy her for the last couple weeks left of the short cruising season.  I made some minor transmission adjustments as I became a pro at adjusting the 1932 Paragon.  A new mahogany engine box and drop leaf table were installed.  With promises of no excessive wakes I treated the family to an uneventful cruise in our restored 1932 Richardson.  A few more successful cruises and dinner parties later I have redeemed myself as a confident captain of a restored, reliable craft.

After a few years of use I thought that Wah-ta-wah could shine a little brighter so I contacted John Ford seeking his opinion.  He was booked for the winter and recommended Barry Ford, no relation, in Interlaken, NY.  Barry made the trip to see the Princess in storage and found her suitable for a winter project.  She was delivered to Barry with the thought of cleaning up the old gal.   Barry removed the top and started his inspection.  He removed everything but the engine and found much work to be completed.  While I was busy running my business Barry was finding more and more winter work.  Since my wife was in the area I asked her to stop by and take a few snap shots of the “sprucing up” that Barry was doing.  That night we had a “heart-to-heart” and I came clean on the fact that I did not know anything other than it would look good at the end.  Brenda’s images presented what I thought was a “total” restoration that I had given full approval on without seeking hers.  As the ice melted after our conversation she said just make sure it was done for the summer.   This being what I thought was her blessing I kept the checks flowing.
Barry contacted me later and we agreed that what was really needed was a mahogany lining and ceiling to complement the clear cedar floor.  “What the hell” I thought… “As long as it is done by summer”…just like she said.

That spring Wah-ta-wah took my breath away as I looked upon her.   The cream color sides looked as rich as butter with the bright work in full shine.  The interior was fit for a king all aglow with shiny mahogany.  Barry fixed the side curtains so that there were minimal outside snaps.   He reflected on the amount of rot that was removed from the decking and was particularly fond of the gleaming floor.  Needless to say I pulled away with pride and it was hard to keep my eyes off the rear view mirror.

We continue to enjoy our Princess on Glimmerglass with family, friends, food and fine wine.