Was This A Set Up? 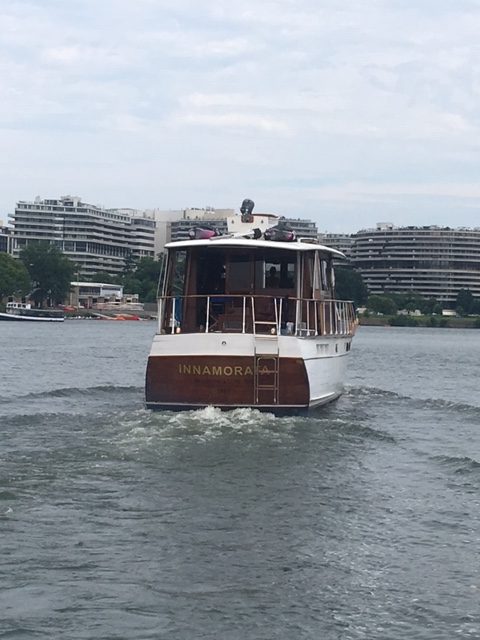 by member Ari Fingeroth member of the Chesapeake Bay chapter

I grew up boating on lakes with small sailboats and ski boats. My wife grew up off the water landlocked in Texas and Calgary. When we started dating she was quickly indoctrinated into the boating life and even had the idea of starting a food boat on the Potomac River that would serve boaters. Well over a few years the business was off and running and I was on the food boat and met a couple that had met and decided to make a 55’ Hattaras their full time home. This got the ball rolling in my head that we should sell our house, invest the equity in a larger boat, and then if a property came along one day we could renovate it to our liking. Undenounced to me, my wife was thinking the same thing just without the few years of living on a yacht in between.

I knew my only hope of a water life adventure was to find the prettiest boat I could get my hands on and start there. I found this 1957 Chris Craft that was for sale and was going to be at an antique boat show in Maryland. We decided to make a day of it. The night before the show my wife mentions a house she wanted to look at on the way to the boat show. We checked it out, and as we were leaving she asked me what I thought. I told her “I have a hairbrained plan, but it’s not fully baked yet. Let me get it sorted out a little more and I will fill you in.” For the first and last time in our marriage she didn’t ask any follow up questions.

We arrived at the boat show, grabbed a glass of wine and a beer and started to wander around. We quickly found the Chris and went aboard. We wandered around above and below deck and after the tour settled down on the bench on the bow overlooking the bay and my wife looks at me and asks if I knew the boat was for sale? Yuuupppp. After a deep sigh and pause she asked if this is why we had come to the boat show? Yuuupppp. Another pause, another sigh, “is this part of your hairbrained plan?” Yuuupppp. Sigh. Pause. “Did I walk right into this?” Yuuupppp. Sigh, Pause. “Well, what would we do after we were done living on her?” At that point I was so overjoyed all I could do was smile, raise my beer, and say “this.

It’s been two and a half years since that outing on Father’s Day weekend and two years almost to the day to when we brought her down to Washington, DC. It’s been two years of learing how to drive a 56’ yacht, how to keep up with bright work, vacu flush systems, overhauling galleys, and redoing the entire electrical systems (I even had to learn that there was more than one to start). It’s also been two years of adventures on the river (first solo docking, first massive thunderstorm, pulled anchors, getting woken up by rowing teams and thinking you were running aground, debating if you will make it under a bridge, naming ceremonies), weekends on the water, time entertaining friends, mornings on the water and learning the joy, peace, and beauty of a wooden boat after being raised on fiberglass.