We Love Our Lymans 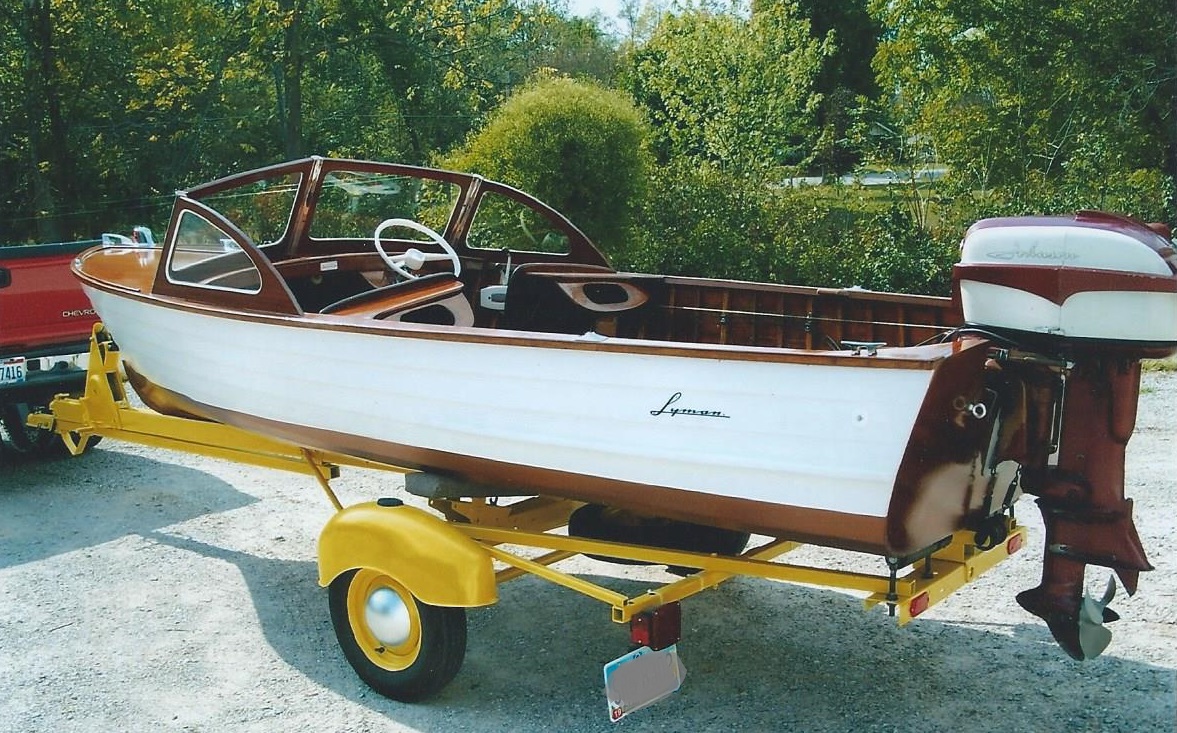 By Rolland Clark, member of the Indian Lake chapter.

I retired in 2008 after forty-five years of working. I estimated it would take three or four months to take care of things around our farm that I put off, well, until after I retired. With the farm to-do-list completed, boredom slowly settled in. I needed a project to keep me busy. I had done several restoration projects over the year, cars, tractors, and trucks mostly, so I began looking. While talking to a friend about my search, he told me he had just traded a lawnmower for an old wooden boat, a Lyman, in fact.

So I looked, liked, and bought it. It turns out it was a 1957 15-foot longdeck. It had a hole cut into the front deck for a fishing seat and although everything on the topside needed to be replaced, the hull and transom were in very good condition. Eight months later she was in the water, looking wonderful, and being enjoyed again. When I had told my boss at work I was going to retire, he asked me why. I told him I didn’t care about the job or what they needed anymore, it was time to do what I wanted to do. My wife named the boat Past Carin’. She thought it fit.

I had joined the AOMCI. One of my new friends there asked me to help restore a Century Imperial Sportsman. Then another had a Thompson to refinish. I was really getting into this. Next, I found a 1949 13-foot Lyman runabout. Nobody in their right mind would have attempted this one. It needed a keel, knee, all the ribs, transom, and everything else but hull planking. The restoration took a year, but it now floats. I did learn to steam ribs, that was interesting. But, building a transom, not so much. After a year of work she was back in the water. That’s when I discovered I’m way to big at 6.2-feet and 215lbs for a 13-foot rear steer Lyman. My wife is, however, a lot smaller. She named it “Kindlin” and it is her boat now.

Then came the Chris-Craft, a 1958 17-foot Sportsman. I loved that boat. The look and sound was great. The throttle not so much. After bumping it pulling away from a dock and hitting a pontoon, I just couldn’t get comfortable running it, so I sold it.

We have three Lymans now, Past Carin’and Kindlin’ plus a nice 1960 16-1/2-foot. We call her “Chix”. We are proud to have been awarded “Best Lyman Outboard” at the Sunnyland show and at Clayton, NY when Lymans were the featured boats with “Past Carin’ “.

And that is how it started. After 11 years, ten Lymans, a Chris-Craft, a Century, and a Thompson, I have stayed busy. I only work on Lymans nowadays. I find them, restore them and move on. It has been a wonderful journey. The hobby has taken us to boat shows in places we might never have gone, from Clayton, NY to Tavares, Florida, and Wolfeboro, NH to Hessle, MI and many shows in between. My wife Fonda and I have made countless new friends made and memories that will last a lifetime. That’s our story and we’re sticking to it, hopefully for many more Lymans to come.