What A Great Six Years 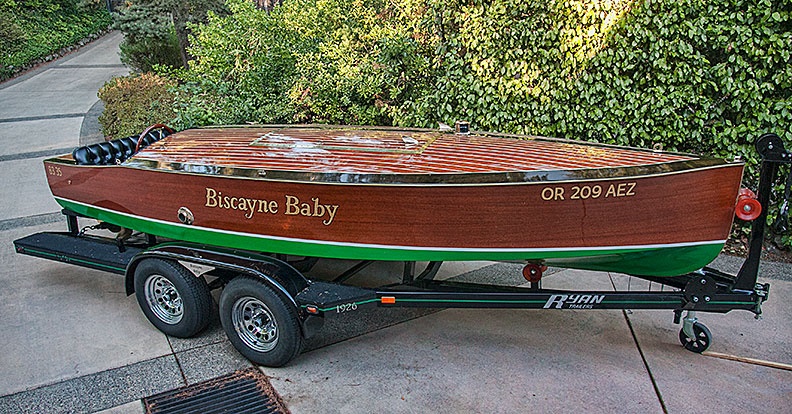 by Wayne Purdy member of the Columbia Willamette chapter

While reading a book called “Boats by Purdy” by Alan Dinn, I discovered he had a complete set of drawings for the Biscayne Baby. I had been looking for a project and this looked like the perfect thing to build. After securing a set of plans I set out to find the correct engine for the boat.

The engine I needed was a Scripps F-6 and the company had gone out of business decades earlier. I looked for an engine for two years and finally located one in Detroit, Michigan. The engine I located was a 1924 and had been sitting unloved in the back room of an auto repair shop for over forty years. Once the engine had been shipped to Portland the rebuilding began. Since the engine was so old many of the parts that needed replaced had to be custom made.

With the engine rebuild underway I began construction of the boat. Normally when you build a boat you build it on a frame or “strong back” which is bolted to the floor. I chose to build my boat upside down on a trailer so I could take it to a professional when I needed help. That was a good idea since I needed help more often than I thought.

I lofted the drawings to full size on three sheets of plywood. From the full size drawings I was able to make patterns for each frame. The frames for the deck were another matter since the drawings were little help in their design. It took a lot of plywood to make patterns for each mahogany frame. It was difficult to get the camber of the deck right since it is arched from side to side and fore and aft. Each frame is different and must have the proper relationship to the others and not have any high spots or low spots in the finished deck.

When we stained the boat the paste stain was applied and then it was quickly wiped off using burlap. I then put on the varnish using a dense foam roller and tipped it with a high quality brush. Sanding was required after each coat of varnish. The final 18th coat of varnish was sanded again with a fine wet sandpaper. Finally the varnish was buffed with a fine compound to give it a high gloss finish.

Hardware for the boat was a sort of treasure hunt that had me looking all over the country for parts. Some came from friends in the boating community. Others were found on eBay and several major pieces had to be custom made. Fortunately the drawings had good detail for the rudder, skid fin and the shaft strut so it was possible to cast them out of bronze.

After over six years of construction launch day finally arrived. At first I was going to go for a big launch with champagne and invitations to anyone interested. In the end I wisely chose a quiet launch with only my wife and son in attendance. It was a good thing since there were a couple of problems and I didn’t have any snickering and pointing when things went wrong. First I didn’t have the nut on the shaft log adjusted properly which caused water to run in at a fast rate and I didn’t have anything with me to make an adjustment to stop the leak. Still I thought I would take the boat out for a very short spin in spite of the leak. Being in a hurry to get underway I got a bit too aggressive with the choke and seriously flooded the engine which created a dangerous situation with raw gas in the bilge. It was best to call off the launch and return better prepared another day. The second launch came off without a hitch and the boat performed beautifully.

I have always liked building things and this boat was the most ambitious project I have ever undertaken and also the most rewarding. The project took over six years but they were great years. In a way I am sad to see it finished since it was so much fun. Guess I will have to start another one.

I would like to thank the many members of the Antique and Classic Boat Society who gave me a great deal of help in this project. Without the many hours of help and guidance I would have never been able to build the boat on my own. During the construction I was constantly amazed at how members were so willing to lend a hand or offer suggestions when needed. It’s not entirely true when I say that I built the boat since it was actually a community effort.