Where I Go She Goes 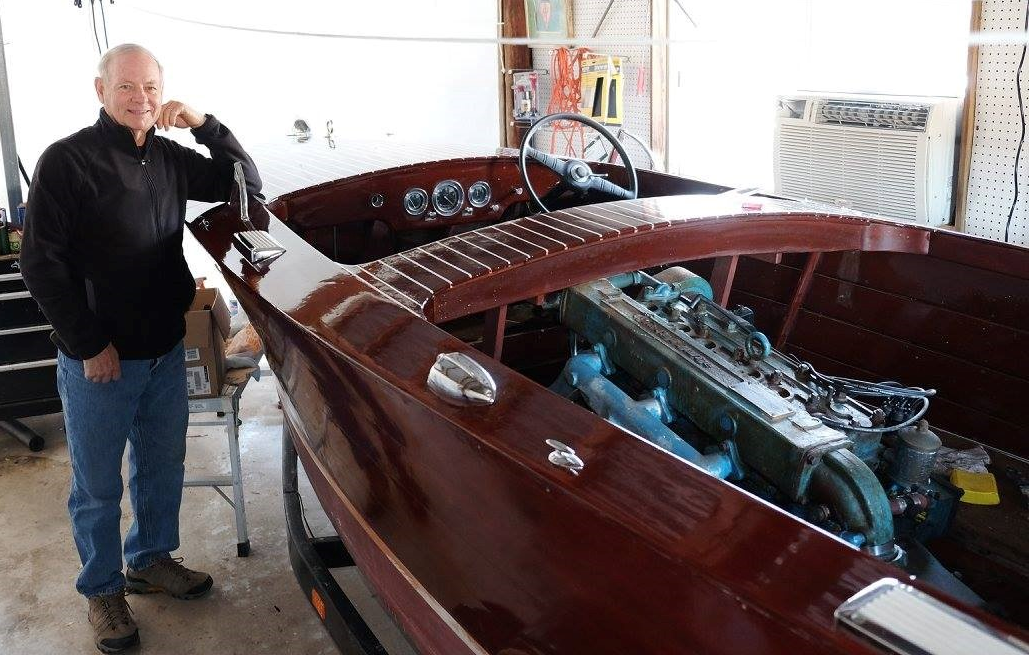 I bought the boat back in 1974 when I was 25 years old and living on a lake in the Grand Rapids Michigan area. When I was a child my dad’s company had several of this same model that were available for use and they were kept on Lake Texoma. When I was looking for a boat that would be a lot of fun I decided to try and get one similar to what I remembered.

I found the 1951 Chris Craft Special Runabout in Benton Harbor, Michigan. It was hanging in a boat house and had not been in the water for 12 years. I paid $400 for the boat without a trailer. I remember that when I got it home I knew it would have to be completely refinished on the outside and decks. The varnish was flaking off in patches everywhere.The interior was good however still the original finish. The first refinish and re-staining was in 1974 and I used the boat for two years. I learned a lot about bottom swelling that first time out!

I took the boat when I moved to California in 1980 and there decided to refinish it again. It was a great father-daughter project! I ordered a new custom trailer and we took the boat to Lake Tahoe during the Conquers wooden boat show. We had a great time there cruising on that crystal clear water.

I also used the boat in Newport Beach, when I moved the boat was stored at a place I had in Palm Springs. It was outside in 120 degree weather but wrapped in several good covers. The boat dried out in the desert and the bottom planks had big gaps between them. When I moved to Texas in 2007 I brought the boat and again it set wrapped up outside for many years. Finally, I decided to refinish it once again and that was October of 2017. I underestimated the time it would take to do the job. Everything needed to be looked at and worked on.

Fortunately the basic finish was still pretty good! I wet sanded the entire boat and applied another 5 coats of spar varnish and then painted new stripes on the decks. New upholstery was added. The chrome was still good. The engine did run… but rough. Two valves were frozen and compression was low on two cylinders. Finally everything loosened up. I converted the electrical system to from the 6 volt system to 12 volts. I also added two more powerful bilge pumps just in case.

After 27 years it is now operational and doing well. I use it mostly on Lake Texoma and I take it to wooden boat events sponsored by the local Wooden Boat Association on North Texas. It is a lot of fun and so many people like to see a wooden boat pull up to the dock when we go to the restaurant at the marina.