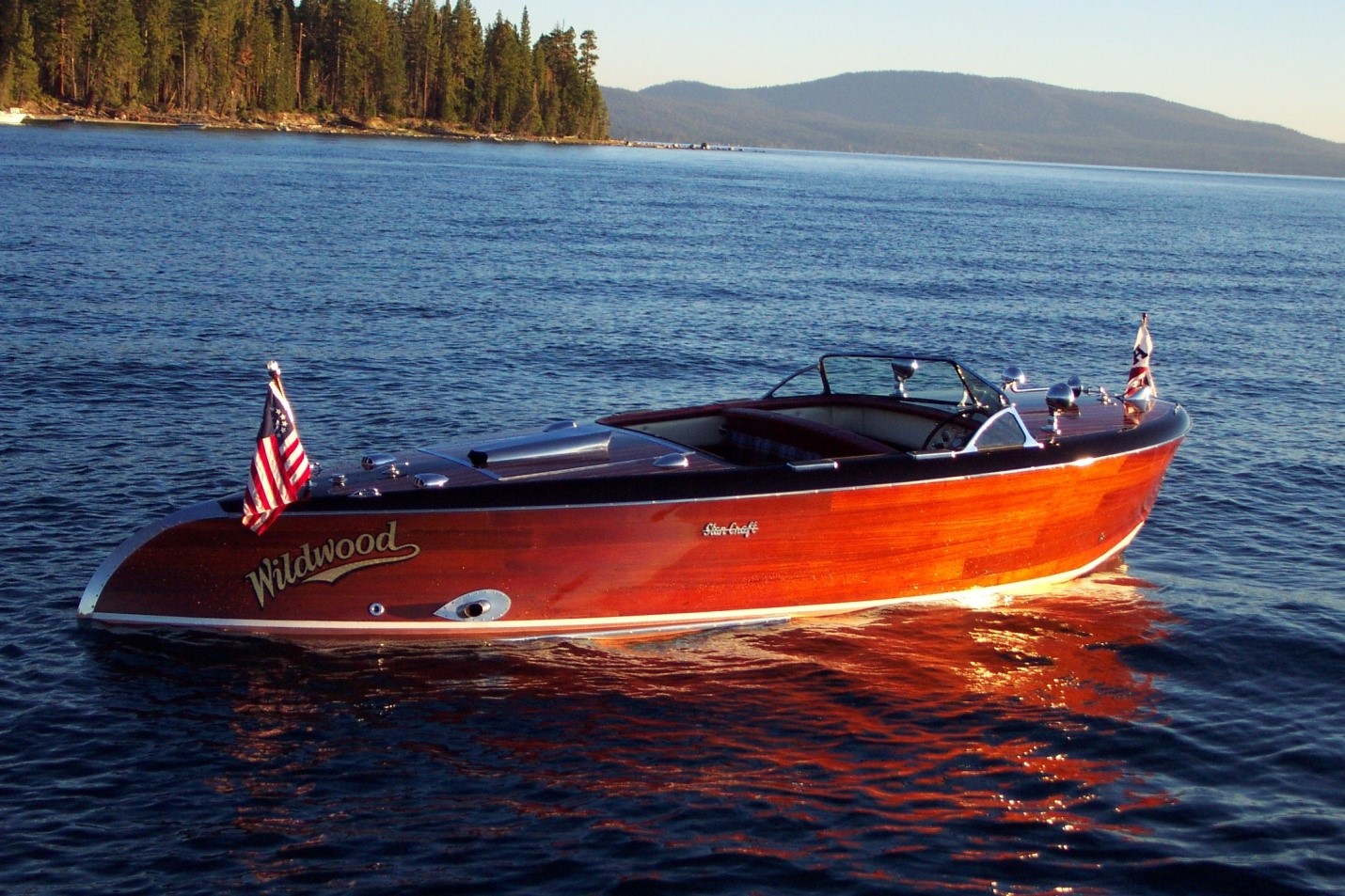 We have enjoyed our StanCraft torpedo stern runabout for over twenty years. After purchasing it through StanCraft in 1999, we moved our new boat to Lake Tahoe. Because of its very exotic styling where the topsides are twisted and bent to create the torpedo stern, we named it Wildwood. Although a beautiful boat, Its appearance needed refreshing after years of neglect.

We disassembled the boat and returned it to StanCraft for some restoration work as well as rebuilding the motor, reupholstering the seats and rechroming several pieces. It has been seen in several Lake Tahoe Concourse shows where it received several awards and is always a hit with visitors because of its unique appearance. We also showed it at a couple of ACBS International Shows and several charity events in California.

Wildwood was built in 1954 for a Montana resident who wanted the fastest boat at his Yacht Club. It is the first of four torpedo stern hulls constructed with a new bottom design which look like “fins” when the boat is in the water. She was ordered with a Chrysler M45S Hemi. The goal of the new hull design was to improve handling, so Stan Young used his 20’ duel cockpit runabout design below the waterline and the torpedo stern plans above. From the rear cockpit to the stern which protrudes eighteen inches past the full transom, the topsides taper to a point while curving like a barrel stern. I believe most if not all the Philippine mahogany planks are original in spite of their being tortured into their beautiful shape. The gap in the sides caused by the full bottom and tapering topsides was planked and the trailing edge was shaped to flow into the torpedo stern giving a sculpted look to the structure. From under the water the bottom looks like a normal 20’ hull while looking from above the boat looks like it has fins at the waterline. I have found ducks resting on the fins several times.

During the restoration process I had to decide if we would restore the boat to original or make it more show appealing with modern upgrades. An example was restoring the chrome valve covers as the copper was showing through the chrome. Should I have the covers reworked to remove manufacturing flaws or leave them as original? I had them rechromed keeping the original as delivered look. In hindsight, looking at other boats with perfect chrome covers I wish I chose the improved process but then the “original” presentation of the boat would have been lost. Which is better, it is an individual decision.

The fondest memories I have of Wildwood are during the early morning at Lake Tahoe before other boats are on the lake. Stepping on the gas pedal the bow rises above the horizon and the boat seems to be levitating above the water as the scenery flies by. Looking back, I see the spray coming off the “fins” while the exhaust trails from both exhaust pipes just above the stern. It is a magical experience to enjoy the boat in this setting.

I enjoy hearing “nice boat” or nice” Chris-Craft” from visitors at boat shows or while launching Wildwood at the marina. I am glad they appreciate these waters born sculptures as much as I do.