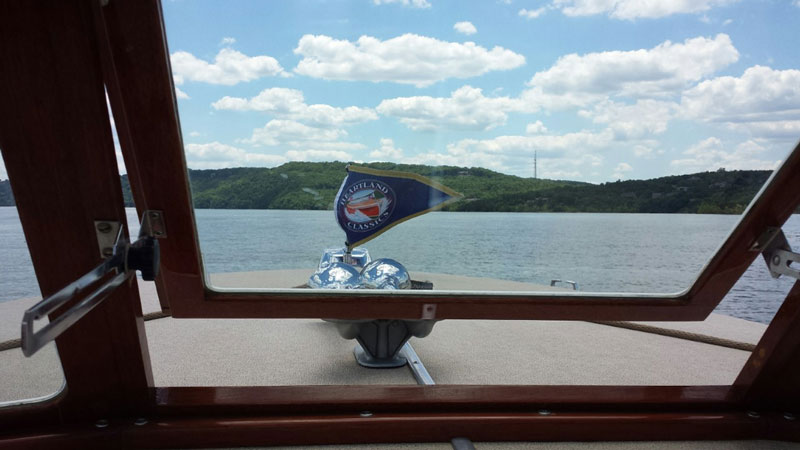 After weeks of flooding rain, the weather cleared for 25 boats and 73 people from 11 states to enjoy a weekend of cruisin’ n eatin’, eatin’ and cruisin’ on Table Rock Lake in southwest Missouri.

Classics Cruisin’ in early June is a tradition of the Heartland Classics Chapter.  One day of extra cruising was arranged for the early birds on Thursday with a 66 mile (round trip) cruise for lunch up the James River arm of Table Rock Lake to the Cape Fair Marina. Seven boats made that trip including this 1987 Cobalt Cuddy Cabin. 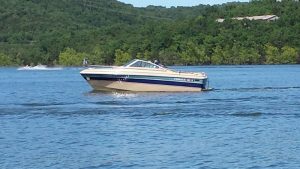 Thursday evening the group gathered to greet old friends and meet new ones at Rock Lane Resort, our host resort and marina.  Even a 1951 Ford “woody” car joined us all the way from Florida. 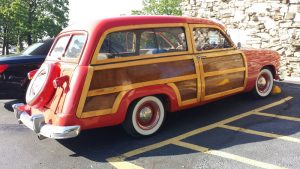 The first big meal of Friday was at the Floating Café on Indian Point, just a short cruise away to start the day.  Friday’s participants chose one of two routes, one south into the Long Creek Arm of the lake venturing into Arkansas waters, or west and north to a marina for an ice cream treat.  Classic boats are seen here staging for the cruise leaders to lead the way. 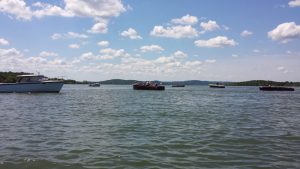 Saturday’s cruise was the long one – 82 miles round trip – west on Table Rock Lake to the Big M Marina where we were joined by this 1967 42′ Owens Aruba.  The Shell Knob Chamber of Commerce had promoted the “show” so a few hundred people came to see the boats even though is was a “Mini” show in a remote area. 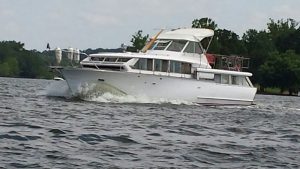 Two more boats that were “first-timers” at the event were this 1964 Shepherd and a 1949 Greavette, both manufactured in Canada, but now in home ports in Oklahoma and Kentucky. 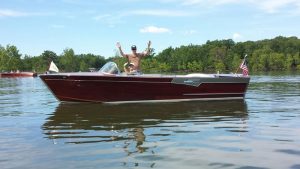 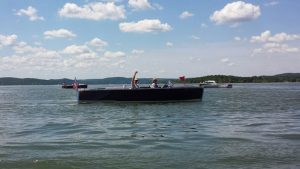 Also new this year at the dock was a 1957 Wizard 26’ steam powered launch which had been a Navy whale boat tender. 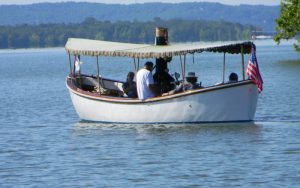 The gathering at the Ozarks Yacht Club on Saturday evening was a chance to visit, compare boat stories, and make plans for the future.  This was the 15th Classics Cruisin’ Table Rock Lake Event.  Each year proves to be a reunion of sorts as well as the beginning of new relationships and new traditions.

This event report was submitted from the Heartland Classics Chapter of ACBS.

This website is a great place to show the world what your chapter is doing.  Email reports and pictures to [email protected].