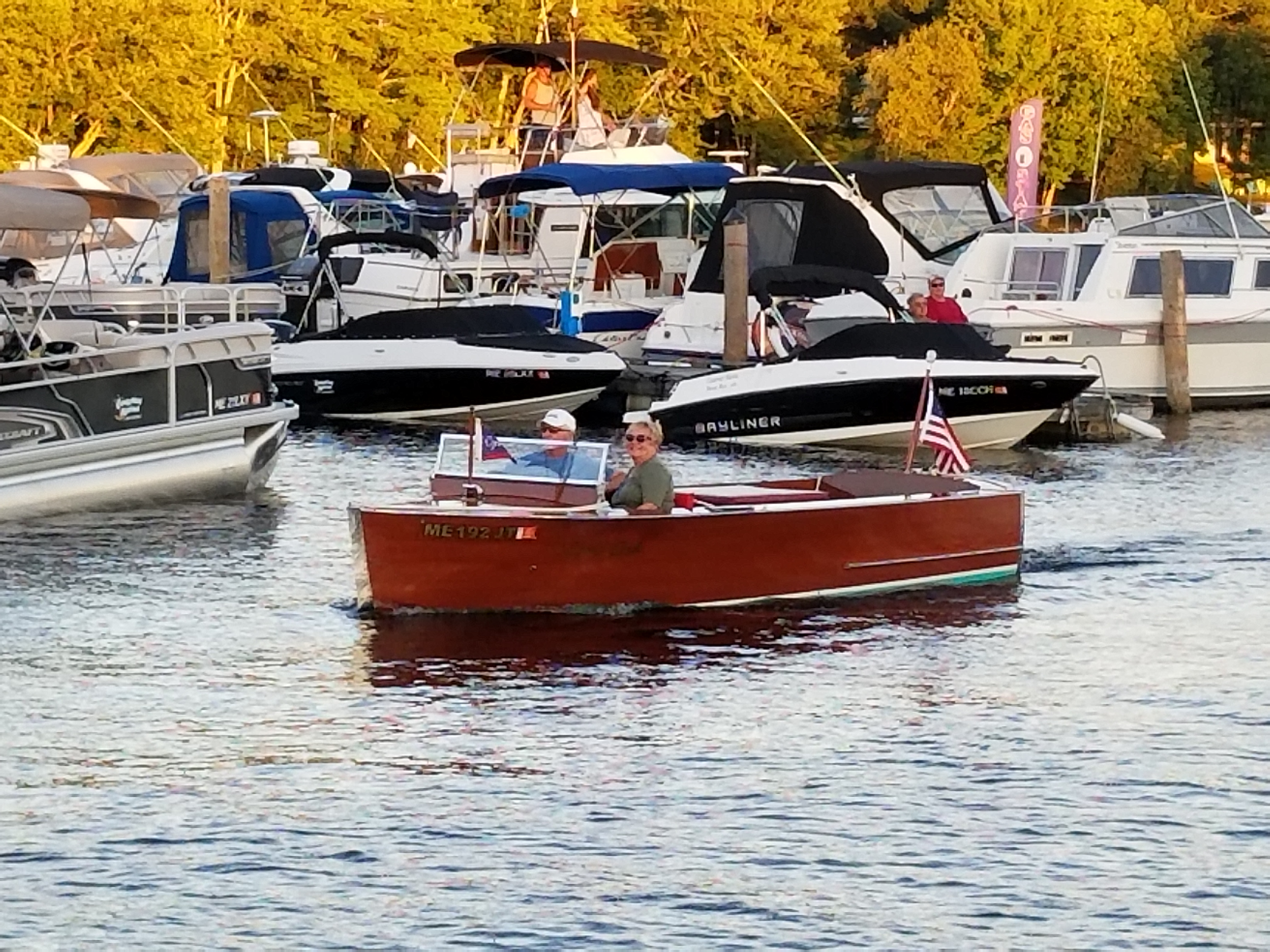 Note: This story and photos were submitted by Patti Bandy and Jon March

Over the second weekend of August, a few of us from Wine Country Classic Boat club (I, Jack Young, Heidi Szonn, Randy Fletcher and Bill Olmsted) took a trip to the Lakes Region of western Maine to attend the Mountainview Woodies Classic Boat Club boat show week in Naples. Jack had happened to attend last year’s show, and was so taken by the place, he made it the place for the Wine Country Classic Club’s annual destination-trip this coming September. Se we were there not only to attend the show, but to learn more about the area for our members.

On the first day, we met some wonderful and fun people from the Mountainview Woodies Club and they invited us to a dinner at the lovely vintage Bayview Cabins on the water, with owners Steve and Sherri Matte.

Jack and I then went to Rick’s Café, one of the last surviving waterfront “Casino” buildings in America. It is directly across the street from the marina and docks where the boat show would be on Saturday.  As we walked in, we met Jon March.  Now Jon has to be one of the most entertaining and knowledgeable people I have met.  You would think you knew him your whole life.  With his friendly spirit to us as visitors, and his wealth of information about the area, he would give the office of mayor a run for the money! An owner of a 1959 Lyman, this year he debuted his lifelong dream of a 1960’s Amphicar. Parked among the other cars in the parking spots across from Rick’s Café, it was immediately noticeable, especially thanks to Jon’s addition of remote control, color-changing LED show-car lighting that illuminated the propellers underneath. Wow! We sat as dozens of amazed people went by taking pictures of the car and “selfies” in front of it.  After our sunset meal on the waterfront and catching up on our plans, we walked Jon to his car and he drove away into the night.

Thursday morning, a number of us met again at the Bayview Cabins for the annual cruise on Brandy Pond through the historic Songo Lock, and on to big Sebago Lake.  It was a beautiful day. Jack and I were on the boat with Chris Cushman, Doug Bell, Jim Wachter and Greg Jettison.  We had a great time with them.  I was the only girl aboard but I can keep up with the guys for sure! Every year, the club is invited to bring their boats to exclusive Migis Lodge, a beautiful, upscale lake-resort dating from the early 1900’s.  They do an amazing vintage Maine “shore-lunch” for their guests, with cooks and open grills. What a spread!  I have to say it was one of the nicest lunches I have had in a very long time.  They had their own beach and protected cove with beautiful docks, and even though I didn’t go into any of the cabins, just seeing the main lodge you know this place is first class.  After lunch we got back in the boats and headed over to Frye Island to check it out for our fall trip in September.  On our way back, we nosed the boats and lined them up at Sebago State Park sand bar and all went for a swim! We were all hot from a long day of boating in the sun and it was just wonderful.  Finally, we headed back thru the Locks, and along thru the scenic, winding Songo River to freshen up and go to dinner…at Rick’s Café again! We had to go back; it’s a vintage 1902 casino, looks down the lake to Mount Washington and is a Maine landmark. Owners Ed & Skip have a tropical “Casablanca” theme there, complete with Humphrey Bogart to greet you at the door. Here’s looking at you, kid!

Friday, Jack and I headed out to check out the area and restaurants for the trip.  Later, at 7:30 on the Causeway, was the Water Parade which was announced by Jon March…live by wireless-mic from his Amphicar! What a hoot! The shoreline and bridge were lined with people as vintage music played. The news crew from WGME was there and broadcast live as well. It was so much fun and many great boats.

Saturday morning, we got up and Jack, Bill, Randy and Heidi helped chapter president Paul Follansbee, and Rick Filiau, the boat show chair, with tents and whatever needed to be done to greet the arriving classics and spectators. I got down to the Causeway and took lots of pictures of the boats at the docks and antique cars lined up along the boardwalk.  Naples has a such a beautiful waterfront and a super layout, with a lovely old-time feel. A treat was Randy Fletcher and Heidi Szonn from our club who brought their Gar Wood, the “White Knuckles”, and Randy gave rides en exchange for donations to Camp Sunshine for Kids. I believe they helped the raise $400 for the clubs favorite charity. Thanks Randy & Heidi!

All in all, it was a great weekend and we now have new friends that we hope to see next year.  And maybe some of them can come to our boat show in July in Hammondsport, New York!