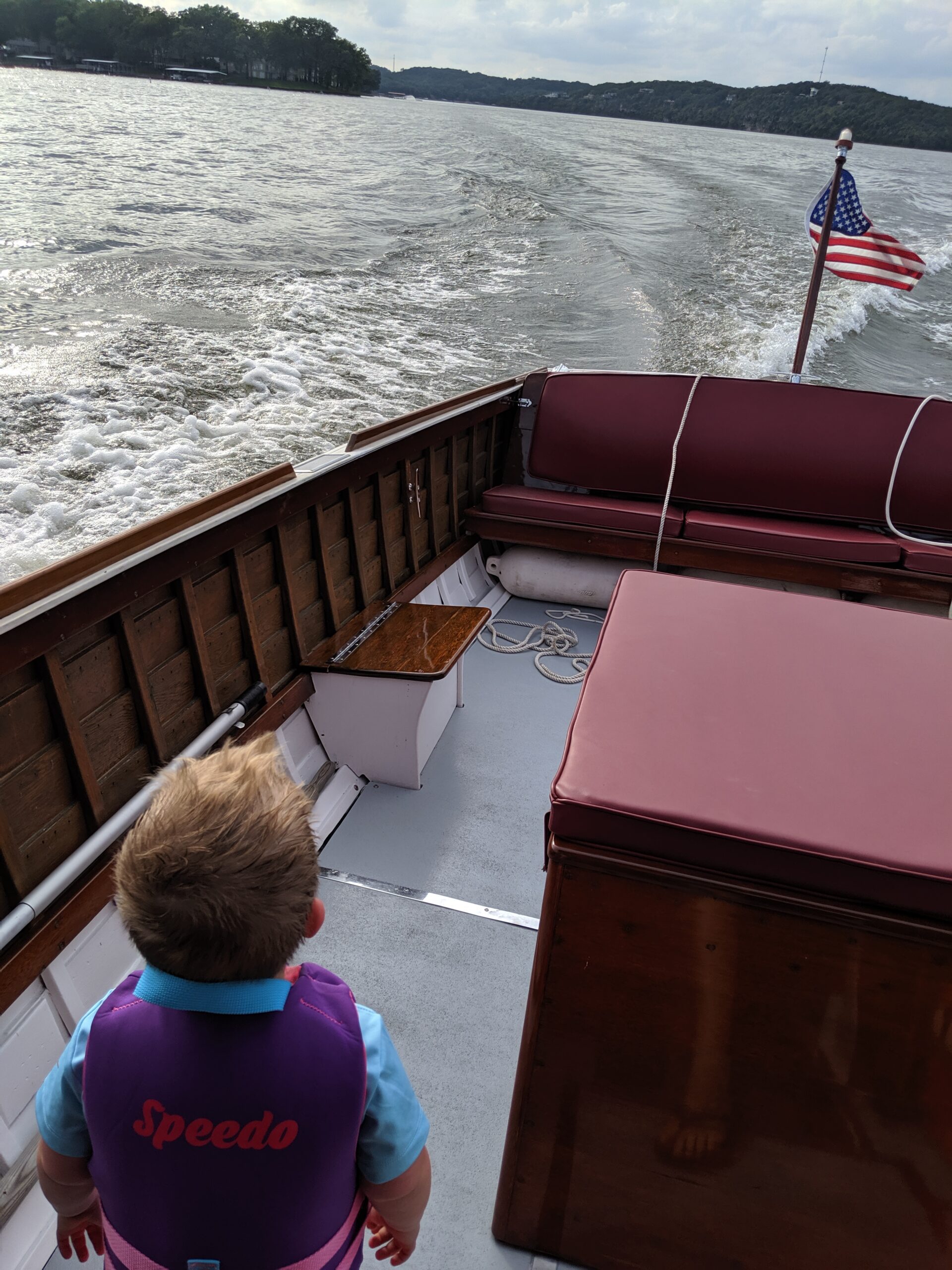 by Steve and Elizabeth Bradbury members of the Heartland Classics chapter

We have been active boaters for many years. In Steve’s case it started with a twelve-foot plywood rowboat and six horse Wizard outboard passed down from his brother in 1958. Since then, our list has included just about everything from canoes to cruisers.

For many years we spent the summers at a campground in Leelanau County Michigan. There we noticed someone had been working on a twenty three-foot Chris Craft Sea Skiff. We asked Jan, the campground manager about the boat and she introduced us to the owner, Frank Hagerty. It was fascinating to hear Mr. Hagerty’s stories about old cars and boats he had rescued from barns, garages, and old marinas. Soon we were searching for a classic boat of our own.

After talking to folks at several local marinas we were referred to Ball Boat Works in Maple City, MI. The owner, Dave Ball, told us to look at a fifteen-foot Lyman runabout that was for sale in Lake Leelanau. A test ride convinced us, and we bought the Lyman that afternoon. The boat is a 1957 forward steer runabout with a thirty-five horse Johnson Golden Javelin outboard on a Gator trailer. We named the boat Wood Duck because a group of wood ducks were circling the boat during the test ride. Wood Duck had been restored and a couple years later we added a windshield and had the trailer restored. The outboard is original. To the best of our knowledge the boat, motor and trailer were delivered to the original owner in the summer of 1957 by a marina in Boyne City, MI
Soon we decided we needed a car to tow the boat. Our search turned up a 1957 Lincoln Coup, a perfect match for Wood Duck. We call the pair the Ensemble and enjoy showing it off in parades, car shows and boat events. They draw lots of comments about learning to waterski “way back when” or hiding kids in the trunk to sneak into a drive-in movie.

In 2016 we decided to spend more time at Lake of the Ozarks to be closer to our son and his family. Anyone familiar with Lake of the Ozarks knows that summer boat traffic and water conditions are way too rough for a fifteen-foot boat. So, with Dave Ball’s help we began searching for a boat better suited to summer on Lake of the Ozarks. We located Old Jer, a twenty six-foot Chris Craft Sea Skiff at a classic boat dealership in Clayton, NY. We purchased the boat in June 2016 and had it transported to Ball Boat Works, where Dave and his assistant Joel completed many structural and cosmetic repairs.

The boat was stripped down inside for repairs to the frame. Then the outside of the hull was coated to the waterline for waterproofing. Lastly it got new paint and varnish. When all the work was finished, we renamed the boat Wood Duck II.
In April 2017 we were able to bring Wood Duck II to its new home at Lake of the Ozarks. We have had many enjoyable cruises around the Osage Beach area with other classic boat enthusiasts. (insert photo5, Steve and Elizabeth cruising Lake of the Ozarks in Wood Duck II, August 2019) The boat is serviced and stored for winters at Performance Boat Center. We are proud to say that it is the slowest boat there.

We participated in an ACBS Heartland Chapter Rendezvous at Margaritaville Lake Resort in September 2019. There was a good turnout. We showed the Ensemble in the parking lot and entered Wood Duck II in the dockside displays. Our whole family was able to participate and grandson Jack rode home with Dad and Grandpa in Wood Duck II.