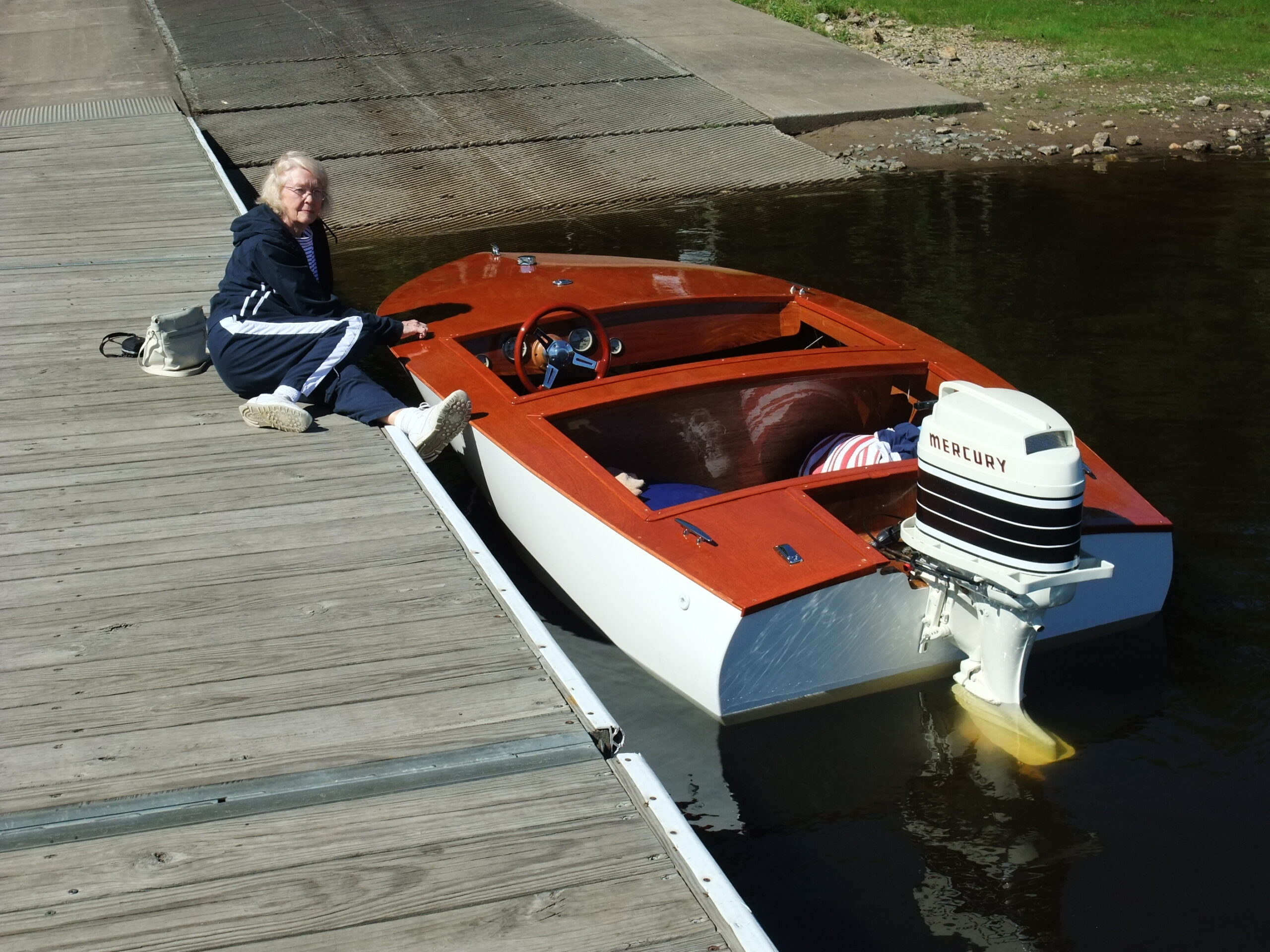 Kathy and I bought our 1st boat – a yellow and white 14’ Crestliner with a 50 Evinrude – from Schwann’s Marine on Long Lake in Sarona, Wisconsin. For the maiden voyage, Bill Schwann, Jack Kunz the mechanic and I launched the boat and I tied it up at the dock. A half hour later all you could see was the top of the windshield sticking out of the water. Eight hours later we walked into Elmer’s Oak Room bar and the band started playing “We all live in a yellow submarine”. News travels fast in Sarona. Obviously, the name stuck.

Forty years later, my nephew found a picture of my 16-year-old brother and 6-year-old me sitting in the 12’ Runabout he had just built from a Popular Mechanics plan. The next Christmas, Kathy gave me plans for a 12’ run-about from Glenn-L Designs. My thinking was – my brother did it at age 15 – what could possibly go wrong?

A year and a half later and about 2,000 hours, I knew the answer to my question – Everything. With help from people on the Glenn-L on-line international builders forum, Kathy’s analytical problem-solving skills and some muscle from friends, the Yellow Submarine II, was launched on the St. Croix in 2015. As I hit the throttle, I’ll never forget Kathy yelling “you did it “. Our boat was made according to Glenn-L specifications using all the best marine rated materials available.

Including the following: mahogany frames, 1088 kerueing plywood, silicon bronze and stainless-steel fasteners, fully encapsulated epoxy process, heat shrunk wire connectors, single cable steering, built in fuel tank and professional upholstery. All installations and materials are Coast Guard approved. It has been professionally surveyed by Cliff Schmidt – S2 Marine Services. Cliff had just flown in from Florida where he surveys boats valued in the millions. He came to our little garage and spent 2 hours on the survey and 3 hours teaching me how to wire the boat. Boating people are amazing.

As most of you know, half the fun of owning a wood boat is meeting and talking with boating enthusiasts of all kinds. Every time we take it to a lake or river, we are approached by people on the launching ramps and docks who want to know about it and share their memories of growing up around wood boats on our beautiful lakes and rivers.

After meeting Al Lindquist at the Minneapolis Boat Show and meeting many other nice people at the International Boat Show on Gull Lake, we joined the ACBS in 2017. Since then, we have attended cruises and entered our boat in the White Bear Show and the Lord Fletcher’s show. The kids love the Yellow Submarine flag but mostly we are asked “why Yellow Submarine II and what happened to Yellow Submarine I “? Since most of our experience has been with outboards, ACBS has given us the opportunity to learn about a whole new world of beautiful antique inboards.

I have enjoyed working in the Land-O-Lakes Chapter display at each of the last 2 Minneapolis boat shows. After spending several hours with fellow members and visitors to our display, I always feel like I’ve gained much more than I’ve given.
We hope to see you at the shows this summer. Hopefully, the Yellow Submarine III will be finished in time for the White Bear Show. As we say in the boat building world, it’s 90% done and 50% to go.