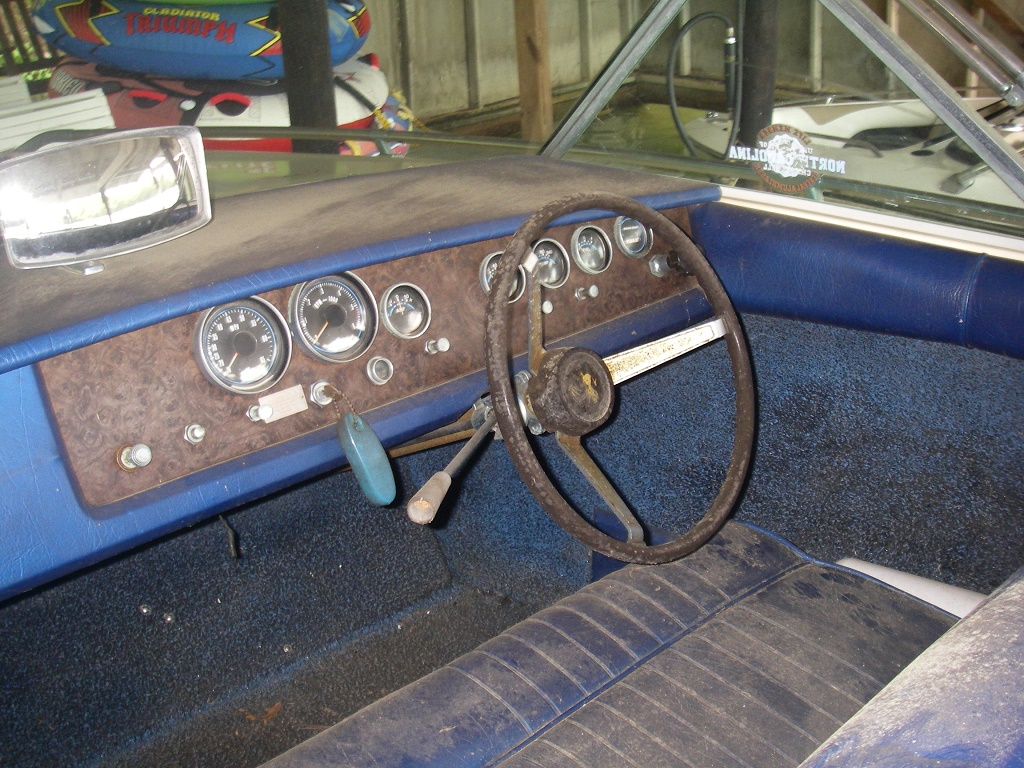 by Mark Murphy member of the Blue Ridge chapter

The history of the boat goes back to 1974 when Helen and Mason Whitney bought the 1974 Century Resorter for use at their lake house on Lake Burton in northeast Georgia. The intent was to have a high performance boat for family use, skiing and cruising. The 16′ Resorter was built with a Ford 302 Mercruiser Engine rated at 220hp and a Velvet Drive transmission. That was one of the fastest boats on Lake Burton at the time! Her open exhausts provided a distinct “growl”.

When Mason was asked “What is the name of your boat?” he replied “That’s My Boat”…he modified the name to “Thatsamabote”…pronounced as “That’s My Boat” with an Italian accent!
During the late 1970’s I was a high school class mate with Clare Whitney, daughter of Helen and Mason. Clare would host high school parties at her family’s lake house so I got to ski behind the AtsaMabote as a teenager.

All during the ’70’s, ’80’s and early ’90’s the Atsamabote was lovingly used and maintained by the family. As Helen and Mason grew older, maintaining the Atsamabote became more difficult and the boat was stored in their boathouse, hanging above the water, high and dry. Thankfully, Mason had winterized her so over the many winters no freeze damage occurred.

Years passed by and at some point the family tried to sell the boat however it did not have a trailer and had not run in many years. No one wanted to buy her. She continued to be stored in the boat house for many years.

In April of 2010 I learned about the status of the Atsamabote and quickly agreed to buy her with the promise I would try my best to get her restored and back on the water! The family graciously sold me the boat for a token amount.

I bought a trailer and my friend Mike Skelton and I slowly lowered her in the water for the first time in many years. She floated fine! Using the family’s pontoon boar, we towed her to the boat ramp, loaded her onto the trailer and hauled her back to my garage. This was the first time in 36 years she had left Lake Burton.

Over the next few weeks we cleaned her up and inspected all the mechanical components. In general, everything was ok, just basic cleaning, oil change, new carb, fresh fuel, etc. By June 2010 she was back on the water running strong!

That summer I re-christened her as the Atsa Mabote (two words) to make it a little easier for people to say her name. On July 4th, 2010 I returned her to Lake Burton and invited Clare and her siblings to drive the Atsa Mabote again for the first time in many years. It was fun!

The restoration and renovation has continued over the past 9 years and I must give special thanks to Bill and Scott Turner at AristoCraft Boat Shop in Dawsonville, GA and members of the Century Owners Club for all their help!

Currently, the Atsa Mabote remains in 95% original condition and is towing the next generation of skiers, tubers and wake boarders on Lake Lanier, north of Atlanta!