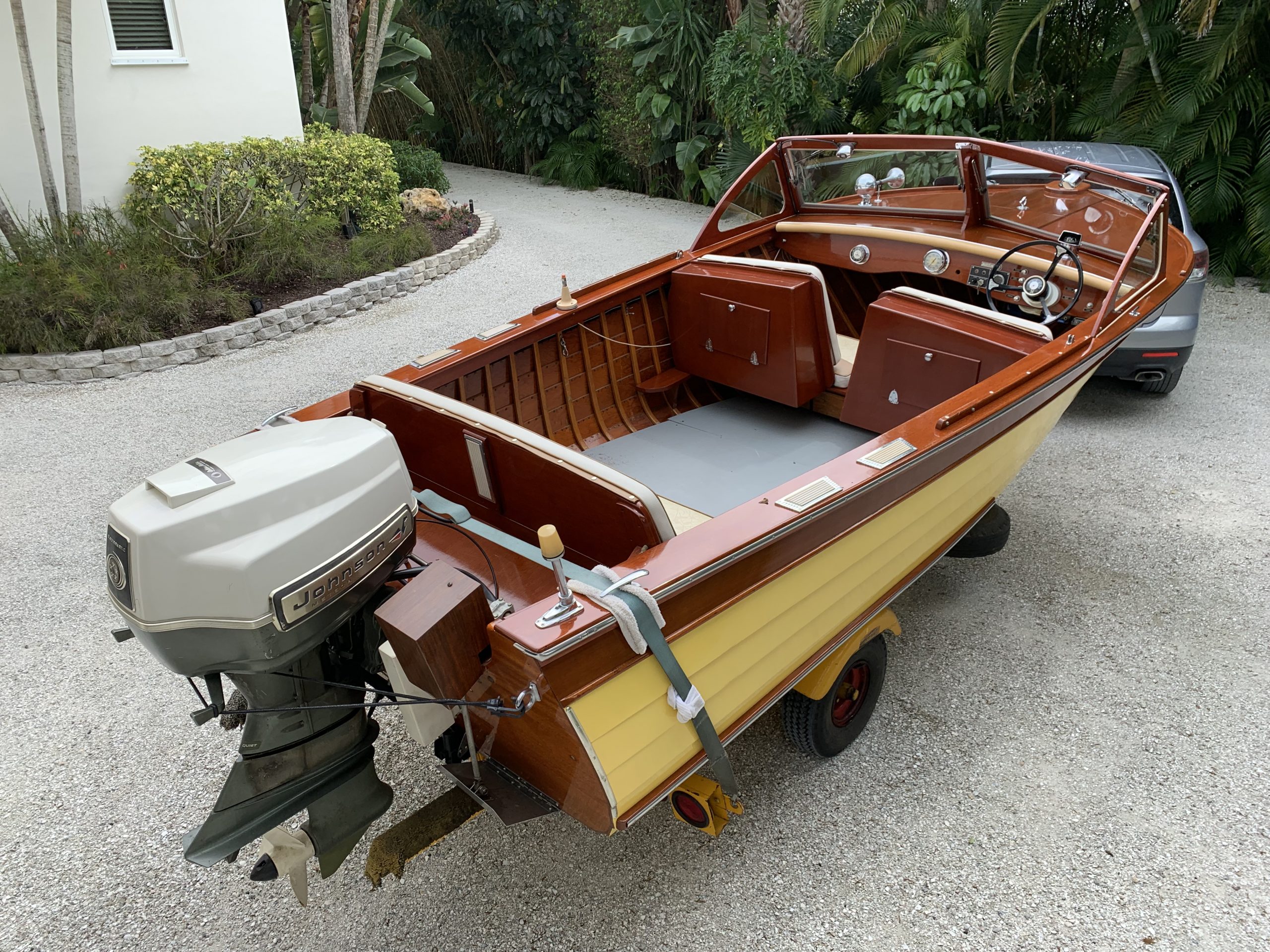 by Steve Lattmann member of the Sunnyland chapter

Many decades ago, I grew up on the South shore of Long Island. My parents were avid boaters and over the years of my childhood they owned a number of different boats. One of those boats was a 17’ 1958 Thompson. It was the same lemon yellow as my ’59.

Somewhere about 10-12 years ago I did a saved search on Ebay for Thompson boats. One day this particular boat appeared and though it was a ’59 vs. a ’58 there was little difference between the boats except for the bow and my nostalgic urge kicked in. I contacted the owner’s representative up in Wisconsin through Ebay and learned the story of the boat. It was a one owner boat and had been recently restored. The owner had passed and his wife decided to sell the boat. The pictures that the representative sent made it too irresistible to me and I knew I had to own this boat. We arrived at a price and I purchased the boat sight unseen. So now the boat is in Wisconsin and I am in Florida…how do I get it here? Again through Ebay I found a shipper and after some discussion decided I would have him transport the boat to me. It was a gamble all the way around as I had never seen the boat in person and entrusted somebody I never met to safely bring the boat to me. Sure enough, the boat was delivered in perfect condition and right when it was promised. I could not have been more thrilled with the entire transaction and certainly the boat! It had been impeccably restored so I can’t take any credit for it. What I can take credit for is keeping it in that condition since it has been in my possession.

Sadly I have never actually used the boat for anything other than display it in the Garage of one of my model homes or in the antique car and boat show that the St. Petersburg Yacht Club holds yearly. My work schedule never allowed me the time to attend events of ACBS or AOMCI. I was hoping that when I retired I would get involved in these organizations and perhaps start building a collection of additional boats.

I did retire last year but about 10 years later than I had planned thus the time to chip away at my bucket list of things I still want to do is shorter. As a result I have decided that it may be best to let Class of ’59 be acquired by someone who will love and use her as she was intended. I have her in my Garage and she puts a smile on my face whenever I look at her. A work of art in my opinion that may not have been a prestige boat of its day but one that still exhibits amazing craftsmanship and a testimonial to the skills of those who built her and others like it. One of the things that I have enjoyed the most while owning her has been the stories I would hear from folks when I had the boat exhibited in the shows. As it does with me, it would bring back their own memories of childhood and the fun times of growing up on the water.