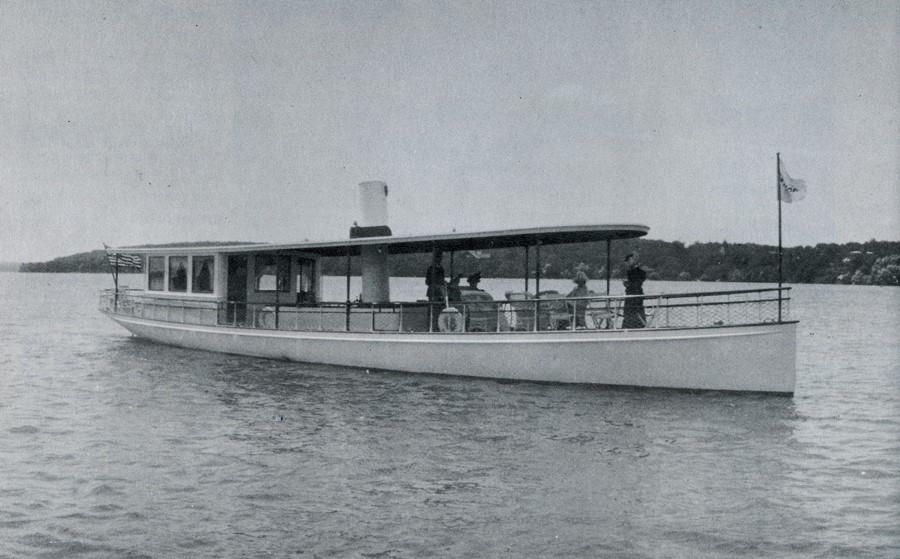 By Larry Larkin member of the Blackhawk chapter

Hathor is 73’ long, with a 13’ beam and displaces about 60, 000 pounds. Hathor was built in 1898 by the Racine Boat Manufacturing Company in Racine, Wisconsin, for Martin A. Ryerson of Chicago, who was best known as an art collector and philanthropist. The boat was named after the Egyptian goddess of love and joy, the name being chosen by the Ryerson’s because it was the name of the boat, they took up the Nile River on their honeymoon a few years earlier.

The 1900 Racine Boat Company catalog described Hathor: “This steam yacht is of our own creation being built for pleasure purposes on Lake Geneva. It is constructed entirely of steel with five watertight compartments. The machinery consists of a Racine water tube boiler and one of our 6, 10, & 16 x 9-inch stroke triple expansion engines developing 200 indicated horsepower giving a speed of 15 miles per hour. Mahogany finish throughout; electric lights and modern conveniences. Very beautiful, speedy, safe, economical craft that will meet the views of the most fastidious in every particular.”

When Hathor arrived at my dock in 2004, it was in poor condition and it was not immediately clear the boat could be saved. Restoration is not for the faint of heart. In my experience, an old boat will have problems that cannot be imagined, surprises that can only be discovered and properly remedied when every part is exposed to the light of day. The only way to approach it is to take the boat completely apart. It is also expensive and time consuming. Time and money go in opposite directions. If you have more of one you can get by with less of the other – which is why the restoration of Hathor took 7 years.

Hathor was completely disassembled. The cabin was lifted off, the deck was removed, and the all the mechanical equipment taken out. The hull was sandblasted inside and out. Any area that had significant rust or was otherwise compromised was cut out and replaced. All the metal work was then coated with modern epoxy paint systems: full emersion primer and polyurethane top coat. New teak decks were laid, virtually all the mahogany was replaced with panels and moldings made with special cutters that duplicated the original contours. A new engine and drive train were installed, and all the tanks, electrical equipment and utilities were replaced. The cabin was decorated with Egyptian fabrics and artifacts and antique Egyptian light fixtures.

In a personal way, my purpose in restoring Hathor is to preserve and pass on to the next generation something that was interesting and important to me. But in a broader perspective, because of Hathor’s age, because of the uniqueness of this particular design together with the rarity of the boat itself, and because of the role HATHOR and its owners played in the lifestyle of early twentieth century Lake Geneva, the boat is historically important and worthy of preservation.