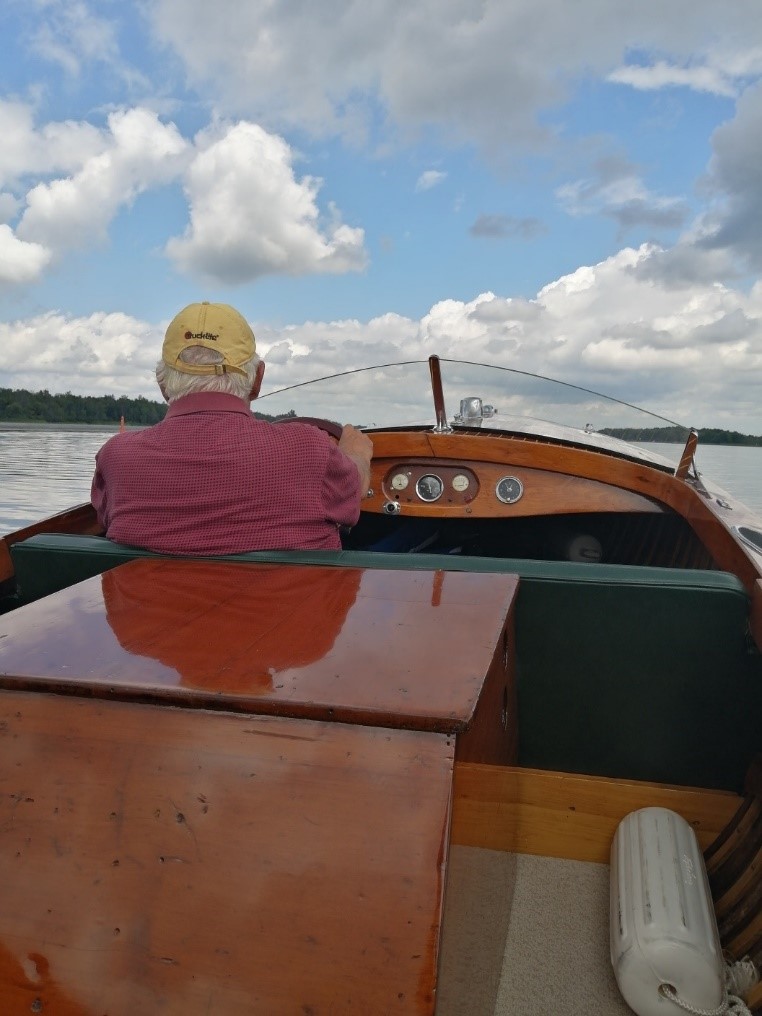 by Carman Keyes member of the Manotick chapter

When I was young, my parents took me to visit my aunt and uncle in Grand Bend, Ontario, on Lake Huron. While there, I got to ride on an inboard boat that was so smooth-riding and fast, and started my love of boats. Over the next number of years, I had many opportunities to ride on outboard boats, which to me were rough and uncomfortable.

I graduated high school in 1957, when a new barber happened to move into town from Picton Ontario. Shortly thereafter, I went to him for a hair cut. During my cut, we somehow talked about water, rivers, lakes, etc. He told me that he owned a wooden boat, but he had left it in storage in Picton, as Mitchell didn’t have any real waterways. When I asked him what kind it was, he said an inboard, 18′, powered by a 4cyl Lycoming Engine. I was intrigued, so I asked him how much would he want for it. We ended up deciding that if I wanted to drive to Picton and bring it back to Mitchell, the boat would be mine. The agreement was if I didn’t end up wanting the boat after all, he would keep it.

My friend and I went to Picton to check it out. We were surprised to find the boat on an old car frame with 21 inch tires. The two front wheels were joined together by a bar so that when steered, both wheels on the trailer turned at the same time. I was hesitant about the trailer but wanted the boat so I didn’t see what choice I had, so off we went down the 401. At one point, I tried to pass a vehicle when all of a sudden the two front wheels of the trailer started to speed-wobble, almost shaking the boat off the trailer. Luckily, we did end up making it home in one piece, and I decided to keep the boat. Over the coming days, I checked out the boat and was able to get the motor running, so I decided to test it in the water.

My friend and I took the boat to a nearby quarry as there were no rivers nearby in Mitchell. When I backed the boat into the water, my friend yelled “water is pouring in!”. I quickly pulled the boat out and found a big hole near the transom. It turns out it was a drain hole. From there, I plugged the hole, sanded the hull down, varnished it with floor varnish, and painted the bottom with marine paint. This became a yearly tradition.

The boat remained nameless for many years. It wasn’t until my daughter was born that my family and I decided the boat needed a name. Because I only had one daughter at that time, and two sons, I thought it was fitting for the boat to be named after my daughter. From then on, the boat was named “Miss Jane”. Over the years, many family members had the pleasure of driving Miss Jane. I am happy to say that my own father, as well as my 4 children, all had the chance to drive the boat at one time or another.

One fall I was towing my son on water skis and I was sitting on the motor cover, steering the boat with my feet. When we hit a wave, the boat jumped out of gear over-revved, broke the crankshaft and damaged the block. I was quite sick over losing my Lycoming engine. A few months later, I was at a boat club meeting and asked if anybody knew where I could find a Lycoming engine. Everybody laughed, as they stopped manufacturing Lycoming marine engines in 1936, so they would have all been gone for scrap. The following winter, Jim Potter called me and asked if I was still looking for a Lycoming engine, and I said yes. He told me that someone he knew thought that there was one in a bush near Gravenhurst. Of course I wanted the engine, so they went out to the bush with snow shovels and brought the engine back on a toboggan. When I received the engine, I sent it, along with my old engine, to an engine shop hoping they could make one good engine out of the two. From there, Miss Jane didn’t miss a season.

Over the coming years, I had minor bottom repairs and restorations done as required. The boat never went unused, as I went on to be blessed with 11 grandchildren and 2 great-grandchildren, all of whom have enjoyed riding and learning to drive Miss Jane. This past winter, one of my grandsons, Andrew, asked me if he could check over Miss Jane. He repaired and refinished the boat, and I am sure it now has its best appearance since it came out of the factory in 1936!

I am proud of the legacy that Miss Jane has become, and look forward to my boat being a part of my family for many more years to come.