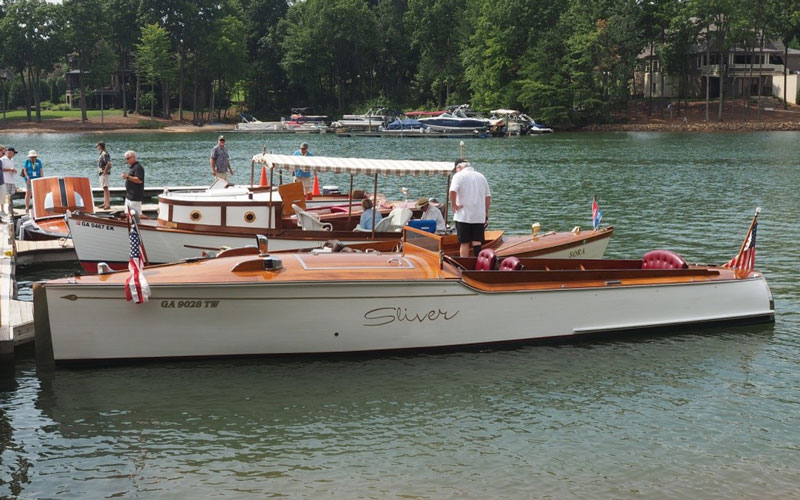 The Blue Ridge Chapter show began on Thursday, August 24th with a tour of JR Motorsports in Mooresville, NC.

If you did not know, auto racing and NASCAR are BIG in the Charlotte, NC area.  This tour was followed by an early dinner at a local favorite BBQ restaurant.

The fun progressed on Friday with a luncheon cruise ending at the North Harbor Club lakefront restaurant in Davidson.  That evening there was a reception at the home of Ed and Judy Longino.  Everyone who attended was very complimentary of the hospitality of this dynamic duo.  We did hear an unconfirmed rumor about Peach Moonshine at the affair.  Moonshine is another item for which the area is noted and is known to be related to the origins of NASCAR—think hot pursuits!

The big day was Saturday August 26th at the Trump National Golf and Country Club.  It was quite an elegant setting.  The employees went out of their way to be accommodating.  The Charlotte British Car Club showed their beautiful touring machines. 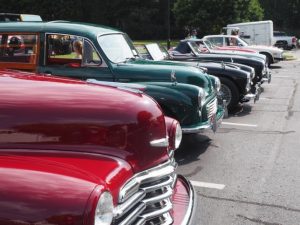 There were approximately 30 boats on land and in the water.  The one drawback of this location is the limited number of slips, but other than that this is a lovely site for a show.  There was a steady stream of visitors enjoying the beautiful day and viewing the cars and boats.

During the event, there was one photograph we would have loved to have captured, but we’ll have to describe it to you instead.  We know this to be true as there were credible witnesses.  “Knot Firewood” is a 1950 18 ft. Chris Craft Riviera owned by Eric and Christine Storm of Flowery Branch, GA.  Randy Cunningham was driving the boat and Eric was sitting on the port side.  When docking the boat after a ride, Randy got a little too close to a Chris Craft Sea Skiff so quick-thinking Eric, who is an amputee, saved the day (and damage to the boats) by taking off his artificial leg and gently pushing off the Sea Skiff.  And yes, the leg did have a boat shoe on the foot.  This is a sea story if we ever heard one! 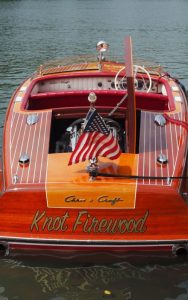 The awards dinner was held at the Lakeside Ballroom at the Trump National Golf & Country Club.  It was a beautiful place to end the show. 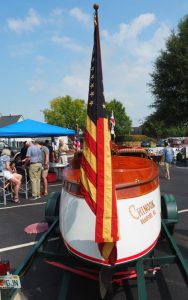 The Best of Show was won by Jim and Margaret Moores of Beaufort, NC for their 1911 Faye Bowen, named Chinook—a real show-stopper.  Jim and Margaret are members of three ACBS chapters and Jim, owner of Moores Marine in Beaufort, NC (restorer of fine yachts) is a big advocate of clubs cooperating to have better, bigger shows.

The “Best Outboard” was a 1957 Feathercraft owned by Jim and Sandra McDonald also of Beaufort, NC. 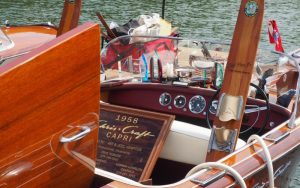 The “Long Haul” award was won by Art Hampton and Tater from Fort Myers, FL.  Anyone who goes to shows in the south knows Art and his inseparable Jack-Russell terrier, Tater.  Art owns a 1958 19 ft. Chris Craft Capri named “It’s Someday.”  The story goes that when Art and his wife retired they started attending ACBS shows and got hooked on the hobby.  They kept saying that “someday” they would have a boat to take to the shows.  Art’s wife did not live long enough to see “It’s Someday” but the boat is named in her honor. 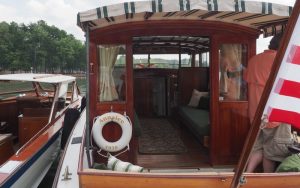 The Best Cruiser award went to a 1930 Elco named Annalee owned by Mike and Kathy Fennell of Charlotte. 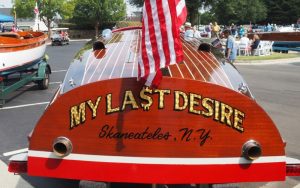 “My Last Desire” a 1995 Hacker Craft won the Best Replica award.  The boat is owned by Bill and Sharon Gregory of Tega Cay, SC. 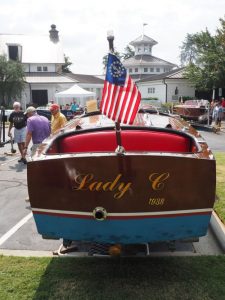 Most Original was won by “Lady C”, a 1938, 19 ft. Chris Craft Sportsman owned by Ron and Linda Chaverin of Charlotte. 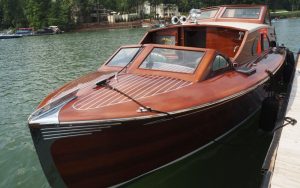 The “Looks Expensive to Me” plaque was awarded to the “Rumrunner” a 2005 Custom Saint/ Hacker designed boat owned by Will and Julie Stout pf Cape Coral, FL.  This boat also won the “People’s Choice” award.

And last, but not least, the club gave their Wayne Forbis Memorial Sportsmanship Award to Judy Longino for all her support of this year’s show. Wayne Forbis was a very involved member of the Blue Ridge Chapter and the Charlotte Show. He did much behind-the-scenes and never asked for accolades. After his passing, the Chapter gave the first and very special one to Wayne’s wife, Alice. It will be an annual award and this is the 3rd one given including Alice’s.

All in all, those who attended were very pleased with the show and we all breathed a collective sigh of relief that the weather cooperated.

Thank you, Judy Hills, for sharing this event with us through your report and pictures.