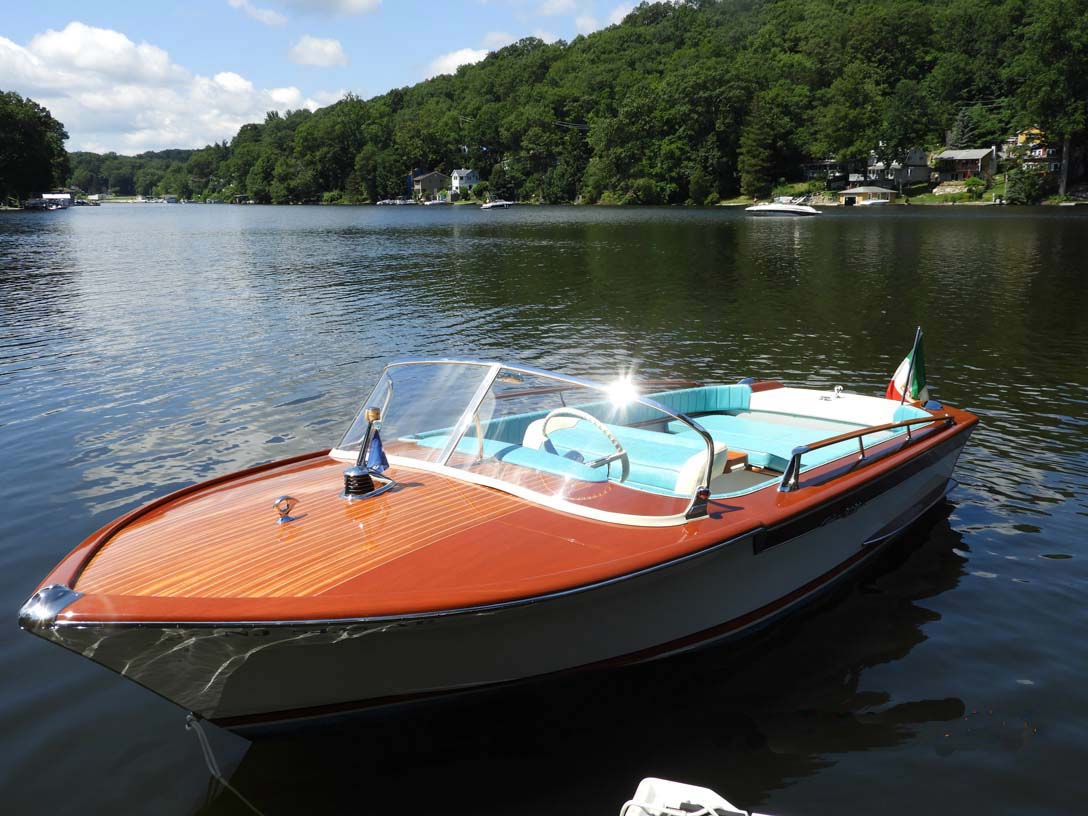 by Peter Takvorian member of the Lake Hopatcong chapter

Riva wooden speedboats manufactured in Sarnico, Italy from the 1950’s through the 1970’s, are generally considered the pinnacle of design, construction, and elegance. In 1965, Carlo Riva and his designer, Barilini, discussed plans for a fast (45 mph) 18-19 ft boat with room to walk around and store skis. When the plans were completed, Barilini’s son had just been born, and Gerard Kouwenhoven, the U.S. Riva distributor with a show room in Rockefeller Center NYC, suggested the boat model be named “Junior”. Between 1966 and 1972 626 Riva Juniors were produced and only four shipped to the US. Riva records indicate, Junior (#15) was the first Junior shipped to the U.S and specially outfitted for the NYC Riva show room with a Riva-Crusader V8 engine with chrome nickel-bronze exhaust manifolds usually installed on Aquaramas, in place of the standard Chris Craft engine.

Although original and complete, it was in terrible shape. The engine and transmission were rusted and in need of total rebuilds. The flooring, side panels, and engine box fabrics were badly stained. The plexiglass windshield was cracked and the rubber gaskets, moldings were discolored and dried out. These were all replaced with “new old stock” items obtained from Riva, as were all the chrome screws and rubber parts. I cleaned, sanded, and repainted/varnished the boat and installed the original re-chromed trim, and gauges before installing the mechanicals.

The boat was used regularly and taken to shows until 2013 when Alan Weinstein (Fla.) replaced the bottom, varnished, and painted the hull, as factory original. Today, Junior # 15 has its original seats, sun lounge, gauges, mechanical, metal, and wooden parts including the gas measuring stick, paddles, wood support poles for the canvas, stern ladder, ski tow, the factory propeller, and original Riva factory “Build Sheet”. Diva has won numerous first-place, best in class, best in show, and best documentation awards. In 2006, Diva was awarded the “Best Preserved Most Original Boat” by the Antique and Classic Boat Society. In 2007and 2014, Diva was awarded “Best in Class” and in 2019 “Platinum” at the National meetings of the ACBS. Diva – Junior # 15 is the 63rd boat certified and listed in the Riva Historical Registry.