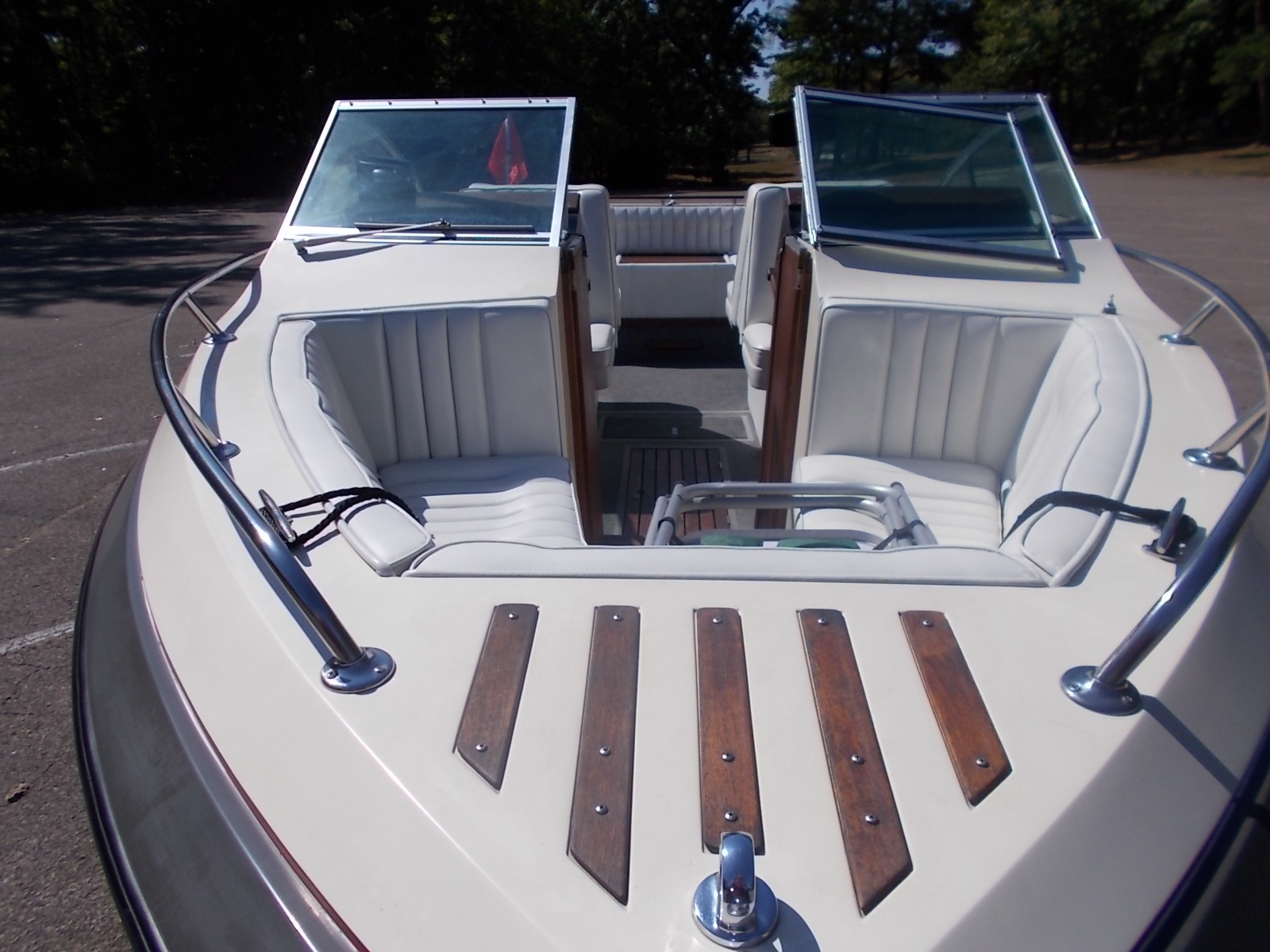 I’m not sure when I caught the antique boating bug. I had an uncle who owned a 1965 Chris Craft 17-foot ski boat. He was kind of a “shade tree” mechanic and he took great care of his boat. We would visit with my aunt and uncle each summer and enjoy rides in his Chris Craft. I learned to ski behind that boat in Lake Minnetonka one summer (the coldest water I have ever experienced). I attribute this early exposure in the early 1970s to my keen interest some years later. I live in the Memphis, TN area and my family never owned a boat. So who else other than that uncle could be the blame for my boating interest, right?

As a young adult I bought my first boat in 1989. It was a 19-foot fish and ski combination boat and I purchased it for the purpose of family time skiing and fishing with my young children.

My second boat was a 1999 Larson 206 SEi. Again the purpose was family time on the water with the growing children. I kept that boat until 2012 and it later became a restoration project.

My first antique boat was a 1955 Wagemaker Wolverine that I purchased in September, 2008. It was a 14-foot wooden hull boat with a 40hp Evinrude outboard motor. By this time in my life I had decided that I wanted to make antique boating and restorations a hobby. I bought that boat online, retrieved it from the Little Rock, AR area, and began my first real antique boat restoration. And I bought and restored and sold a few boats over the next few years after that.

My second antique boat was a 1960 Chris Craft Cavalier that I bought in the Fall of 2010. This was a 18-foot boat with the original Chevy 289 in it. That was also a full restoration of the boat and motor. I learned way more about the internal combustion engine than I thought needed to know.

My third antique boat was a 1964 Chris Craft Cavalier Golden Arrow that I bought in July, 2013. This was a 19-foot boat with a Chevy 350. Also a full restoration and one of the coolest looking runabouts you’ve ever seen.

The next boat purchase was an antique fiberglass hull boat. With the Larson long gone, I wanted to find something that I could use for family boating. In August, 2013 I came across a 1982 Cobalt 18-foot with a Mercruiser 198 engine. It was in running condition and I purchased it for next to nothing from a seller in Connecticut. This boat needed some cosmetic work, wood trim, carpet, decals, and some floor repairs, and a little engine and wiring work, etc… Not a full restoration and engine rebuild, but still a decent project that turned out really well.

By this time my family and I were boating on Pickwick Lake, TN near the Pickwick Dam area. On a weekday it’s like the smoothest water you’ve ever seen. On a holiday weekend it’s like being inside a washing machine if you’re in a small boat. The 18-foot Cobalt wasn’t going to work for us long term, but I really came to like the Cobalt brand.

I started looking for a larger Cobalt boat that I could use as my antique boat and also as a good “user” boat. I found my 1985 Cobalt 21BR online from a seller in Springfield, IL. It was also in running condition so off I went to Springfield in August of 2015.

This boat hasn’t been a full rebuild project either. But we have done quite a bit to it nonetheless. Some cosmetic improvements and some mechanical. We started by replacing the rub rail. Then we replaced the striping and decals. We also repainted the out-drive and replaced the Mercruiser decals on there as well. For performance (and because rednecks like shiny things) we added a stainless steel propeller. And a new doel fin helps us get on plane a little faster. Being an older model Cobalt, the 1985 21BR has a good bit of wood trim. So we removed and re-stained and varnished all of that.  We made a new top for the rear storage hatch cover out of African Mahogany, as well as a new table top for the rear seat and engine cover hatch.

From a mechanical standpoint most of the work has been electrical, new coil, contact points, spark plugs, spark plug wires, distributor, resister wire, pretty much everything to do with getting spark and “fire”.  As an antique boat enthusiast, myself and my family have spent more than our share of time either stranded on the water or being towed off of the water. But, knock on wood, we’ve had better luck over the last couple of years.

We also did a good bit of work on the trailer. We didn’t plan to replace the tires the way we did, but we blew three tires one night on our way to a boat show in Alabama. So we went to a tire shop the next morning and replaced the rest and got a new spare.

All in all we have really enjoyed the 1985 Cobalt 21BR. As I said, we’ve spent our share of time stranded on the water and on the side of the road. But sometimes that comes with the deal when you’re antique and classic boating, stuff is going to happen. You learn from those experiences and work to be as prepared as you can be for the next time.