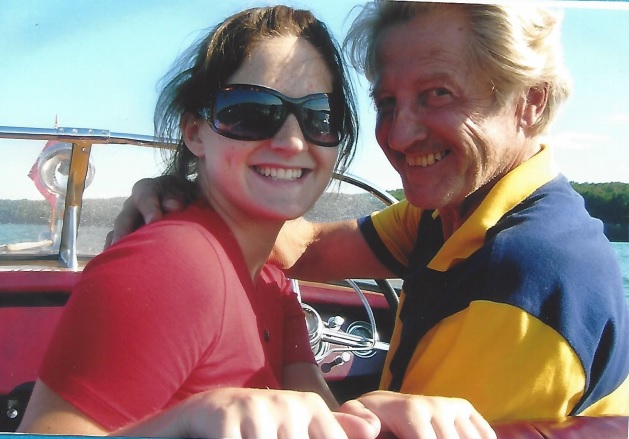 by Gerard Cerand member of the Finger Lakes chapter

When I was in high school in Elmira, NY in the mid-1950s, I had a lot of friends whose families had cottages on Keuka Lake. My close childhood friend, Jack McLeod’s family had a cottage on the lake with a beautiful GarWood Wooden Boat to water ski behind. The Lake is very clean, can be very serene when morning breaks, and the sun rises in the East.

All of my friends would invite me to visit them during the summer. Most of their families all owned beautiful Chris-Craft wooden boats and that’s how and where I first learned how to water ski which I really enjoyed. It was truly a lot of fun. The Finger Lakes are more beautiful than any places in Europe that I have ever seen in my travels. When my military service ended, I settled in the Washington D.C. metropolitan area. Eventually, I had a houseboat with three friends on the Potomac River in the 1960s in Washington, D.C. We called the houseboat the Good Ship, Lollypop. These experiences were fantastic!

In the late 1960’s I also met a friend who had a 45 foot Hatteras Yacht that you could actually water ski behind, and when I started doing that again, I started to reflect on those great summer memories I had as a youth at the Finger Lakes.

However, as I got ready to retire that old “itch” to go back to the Finger Lakes became intensified. In 2005, when I visited my youngest daughter, Paige, who was studying at Cornell University, I went to down to the shores of Cayuga Lake and started thinking to myself that I might buy a place on the lake. Halfway through the summer, I saw a place that I was very interested in, and started looking online for Chris-Craft wooden boats from that golden era.

I finally found a unique 1955 Chris-Craft Capri in Spring Park, MN that had been in dry dock for the past 12 years, and was an all original boat including the brass fire extinguisher. I purchased, and had it delivered to Cayuga Wooden Boat Works located in the south end of Cayuga Lake in Ithaca, NY that specialized in old wooden boats. They totally went over the whole boat, fixed and repaired everything, and put it back in the water by the end of the summer. Once I started cruising around the lake, I received many fantastic reactions, raves and comments by anyone who observed my classic wooden boats from a bygone era that now has been replaced by fiber glass.

I bought water skis, life jackets and totally enjoyed the boat on the Lake with many friends that are not hard to find when the boat is set to go cruising. After a few idyllic summers, my adult children moved to Austin, Boston, and Italy, and the boat was not getting used much anymore. It’s an original 1955 Chris-Craft Capri, and it should be used again so someone else can experience the joys that I have had with this beautiful boat from the golden era. There is no question that a community of wooden boat owners does exist, and there will always be a place for them to enjoy the pleasures of these classic wooden boats that can never be forgotten.